Posthumous Ramblings Of A Griffin Hunt.

Share All sharing options for: Posthumous Ramblings Of A Griffin Hunt. 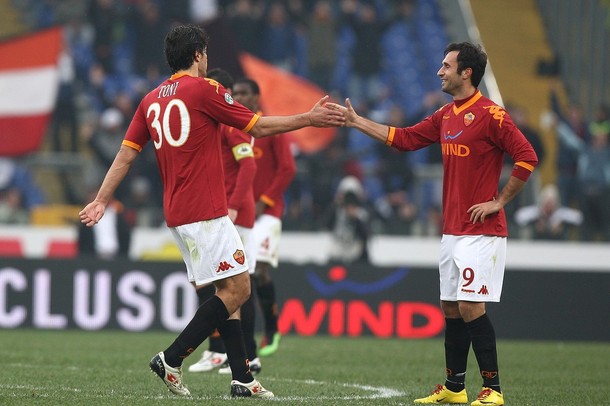 As I sat down to look back on Genoa Monday night, I realized the game, in my mind, much like the one against Triestina, was frought with gaps. Partly because streaming was dodgy; partly because my eyes need a nanny to keep track of Mirko; but mostly because the espresso machine is on the fritz. Ever since Spalletti, I've been a big fan of filling gaps, so I've downloaded the game for another, more nuanced viewing. Using more "more nuanced" liberally, as during this I'll be playing a little game called "can he multi-task enough to hit pause when the phone rings?".

Stay tuned to find out!

Pre-kickoff: As they go through the pregame handshakes one of the children standing by the ref continually sticks his hand out waiting for a shake, yet he's so short he's beneath the view of all but a certain Chilean, thus he is continually snubbed. The look on his face would have Dirty Harry running rivers. How tragic.

Hopefully the team gives the young lad something before the Juve game in reparation. Like Cassetti's job.

(That's a joke, of course, but watching Cassetti recreate The Diego against Genoa will keep me up nights the remainder of the week.)

Simone looks stellar with the band, fyi. We'll call this the Doni-effect.

Of all the people during the silence for Haiti, Julio Sergio looked the most concerned. This would probably explain his long overdue "hiccups".

1' Important fashion note of the game #1: Not at all a fan of the club name spelled out down the back of the socks. Even if it was designed towards aiding the color blind. Fashion > handicaps.

2' Important fashion note of the game #2: There are no less than twelve people wearing the same shiny, puffy NWY jacket as His Tottiness in Francesco's box.

On further view it may just be one other, but I feel the need to blow this well out of proportion for the sake of Cesare Prandelli.

Actual game note: on the first save by Amelia, Genoa had decided previously, without the ball, that they were infallible to error and would retain possession absolute. Thus they decided not to put a body on Luca Toni and allow him acres to pasture, which David noticed and, upon Genoa unthinkably losing possession to a throw, lollipopped into the box, which Luca, now sporting a shadow, then chested down onto Simone's precision right hammer.

3' Suazo is easily the best field goal kicker in calcio, and has been for some years. You'd think he'd have learned by now there are much more difficult things to fix, such as AIDS and stupid people.

4' Random thought #1: speaking of Perrotta's inexplicable new finishing boots, surely soft, cuddly, and all sorts of plush, they should suck the fat out of Doni's head and inject it into Batptista's feet. Touch of marble: cured.

This may sound outlandish, but think about it for a second. Clearly I should be running this show.

6' MOTFSM (man of the first six minutes): David Pizarro, and by some margin. Though I'm tempted to give it to Suazo for the Roman side.

8' Pinpoint cross to Luca on his first header miss by none other than Marco "You're on my team, right?" Cassetti. That little kid may have to settle for Cicinho's roster spot.

9' Eruption - good eruption; not "book the lawyers a business class to FIGC headquarters" eruption - in the Olimpico, which I can only assume to be Sergio Floccari scoring an 8-minute brace.

I still say he would've done quite well under Spalletti, but his technique is fucking woeful. Why isn't he in the Prem yet?

11' Can you tell how easy it is to do liveblogs when not having to hit "save/publish" every thirty-seven seconds? This is dreamy.

13' This'll surely require some research, but this may be the longest JSB's locks have flowed this season, coincidentally in arguably his least convincing performance. Obviously the key is to keep it tight and constantly fresh to keep the heroics coming.

14' Little news out of Russia this week which has largely bypassed the Roman radar: Zenit, now coached by a certain Luciano Spalletti, has publicly admitted interest in Roman Pavlyuchenko and Fred. Those names may sound familiar, and if they don't, they should.

Further confirmation Spalletti was wading well into mercato matters and that you should never, ever trust the press. Or stubby little gnomes offering lollipops at half price.

16' This is the part where I'd congratulate Daniele on his calcio Oscar, but anything which nominates Rosetti as Serie A's best referee automatically loses any and all legitimacy. Which, ironically enough, is often the case with any game he referees.

But then you know that already.

The suits really have no choice but to snap up Antonio Di Natale so Ranieri can run out a To-To-Toto tridente of wonderfully asymmetric disproportions, do they? Zampa's fusebox might short.

21' A Griffin trying to break the defensive line whilst being marked by........Simone Perrotta.

Simone's got your trequartista right here.

(Simone's sitting next to Pizarro right now, but still.)

23' Rumor, the ever dastardly rumor, has it that Azevedo is less than likely and that Pit, who was on his way out of Rome, impressed during his brief Triestina trial. Of course he did - Triestina couldn't have thieved a lollipop from that stubby gnuckin' fome. At what point in a Serie A game do you say, "alright, here's where we'll give the Romanian winger who couldn't get a game in three years a run further back in the formation?". To call him the homelessman's Ignazio Abate is an insult to Abate and homelessness.

25' Rumor also had it that Julio Sergio's Brazilian passport was viciously revoked due to his stellar and lemon-less performances in net. The Brazilian consulate just sped to the Olimpico to return his papers as he launched midair 16 yards from net.

30' I didn't get the Fatic for Sculli sub at the time and I still don't get it. Wouldn't the crippled carcass of Sculli still been more effective?

Unless, of course, your name is Francesco Totti and you actually wield the skills to back up such ridiculous proclamations. 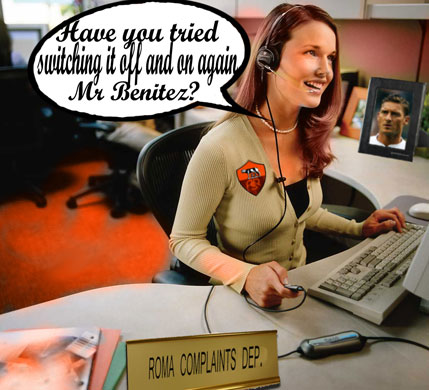 This could only have been more accurate if the fine young lass was replaced by Mauro Esposito.

Speaking of Espo, wonder if he can play leftback...

36' On the subject of vice-Riise, what's the point? The man's indestructable. Why even bother finding a replacement? Spend the pennies Azevedo is worth on a little Quaker State to keep John chugging along smoothly and all will be well.

37' I have the sudden urge to fly to the Fiumicino, snap a John Arne Riise long-sleeved replica off the rack and putter around Rome.

37.5' Simone just knocked a 30 yard pass to Mirko with absolute accuracy; perhaps he should be sitting alongside David as opposed to what's-his-face.

41' David had another...David moment. Cuts it back between the legs to dribble out of trouble and ends up dribbling it to...a Genoa shirt.

42' Daniele's demeanor on the bench is in stark contrast to his on-pitch lunacy: legs casually crossed, leaning back as though about to enjoy a slow-sipping cordial without the slightest hint of facial expression.

Maybe the shirt is the potion which unleashes Mr. Hyde.

A lovely shot of Amelia screaming at his defense as Luca was being played by none other than Marco Rossi.

Unlikely to be how it was drawn up on the chalkboard.

45' And another lovely shot of Rosella protecting herself from SARS, bioterrorism and singeing insults from the ultras with a scarf over the mouth.

47' Taddei nearly ends Fatic's still young career as he's looking for an exact replica to last year's fixture, so nearly including the lasting image of Criscito grabbing face as he's hit on the back of the head.

47' On the Baptista switch which has garned few thoughts and even fewer words from my good self:

I'm not entirely sure things got quite off the ground as much as the press would have you believe. Inter clearly want a replacement for Sneijder, Baptista couldn't pull the strings in a puppet show, much less calcio. Openly pillaging & plundering Lazio's non-existent reserves is more than fine.

49' Mirko's boots are positively blinding; I've always wondered if there's something in camouflaging boots to resemble grass. There must be at least a fraction of a percentage of advantage in it somehow.

50' Speaking of smoke & mirrors, John may have just pulled off the defender's trick of the year by stopping the ball on the touch in order to leave it stationary then curling around his man.

Granted I'm not sure it was entirely intentional, but who's to argue?

52' Six shirts on Mirko right now. Six. Is that any indicator as to the type of game he's having?

55' I retract my earlier retraction about that kid and Cassetti's job this weeknd having just watched The Diego 2.0 once again. Perhaps a derby-esque halftime cameo is in order to wipe out the bad juju.

58' In honor of Simone taking Daniele's job as we speak.

59' Brilliant job by Luca to drunkenly stagger into the free kick which we now know is leading to Lucagol 2.0.

61' Essentially hitting the walkthrough stage of the game.

62' Hitting the walkthrough stage of the game.

63' Into the walkthrough stage of the game.

66' Fashion tip #3: It's a bit audacious for Genoa's rather pedestrian and stale kits to label themselves "Gaudi".

68' The game is well and over but Genoa is the tactical equivalent of gumbo. Can only imagine what the recent thrashings have done to their egos, resiliency and collective will to live.

72' Whilst waiting for the embers to die down, I've been pondering the form table of Roma's 'competitors' in vibrant color.

Or translating this to a 38 game schedule were we to consider this the pattern of one solitary team...

The pack will be dwindling - and quickly.

76' Thinking the unthinkable: if Cagliari were offered Mauro Esposito & David Suazo back for free, would they accept?

As of this moment, I'd have to say no.

78' Riise cleans out Tomovic with a tackle which belongs framed in a Norwegian museum as we're offered a glance of Daniele nail-biting, worrying for his status as calcio's resident bulldozer. 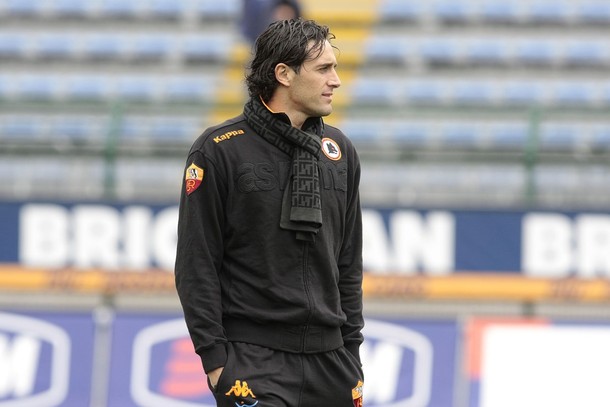 Only an Italian would nominate Fendi as an appropriate article of clothing for pregame warmups.

81' Fashion discussion #5: As the sun goes down the other guy with Totti (face partially blocked) has put on sunglasses, which is good as that moon gets fucking bright.

85' Jeremy Menez is the new caring.

86' Francesco just left; clearly he didn't watch Cagliari, or else he would've been sitting in Daniele's lap biting his fingers for him.

87' It's really quite incredible how little refereeing factored into this game; in fact I can hardly remember a card - perhaps because there weren't any. (As good an explanation as any, really.)

89' And we enter the frame which sees Yeremy & Julio on the sideline, each getting their lesson in alertness.

I, much like the first time 'round, could hardly stay alert past the sixtieth, espresso and all.

Maybe they're just that commanding.