The Night of the Hunter

Share All sharing options for: The Night of the Hunter 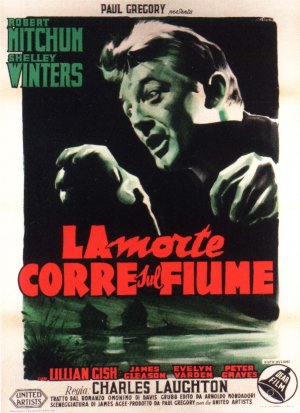 A man awoke in the morning, foggy-eyed and worn. He rose, swinging his legs over the side, one at a time, each requiring the herculean efforts of a thousand men. Posture slouched, head hanging, he lifted eyes ever so slightly to glance at the the alarm clock, the red light district of the bedroom. He bent further, releasing his shoelaces into freedom, each one by one, before kicking his shoes to the floor. He stood with nary a hint of evolution, undoing his belt, staring across the room into the dusty mirror showing a man he hardly recognized.

The smell of a loving wife wafted upstairs; the chirping voices of little children meant breakfast would soon be on the table. First shirt then pants fell to the floor before quickly being replaced by another set from the rack. A pair of shoes, black, freshly polished with just enough clop to be heard but no so much as to be obnoxious, were pulled on and tied tightly. As the chirping grew ever louder, it was met with the hollow clop echoing off every step until finally reaching the front hallway. Staring down the hall into his awaiting family, he turned to the next mirror, adjusted his tie, took the breath of those same thousand men and walked down the hall.

He sat down for a hearty meal with the family, each discussing the day and all that it would bring. He implored the eldest to make strides in clinching his successes, the youngest to reap within himself his talents and the middle to tirelessly continue his studies while awaiting his chance to shine. He then rose from the table, kissed his wife on the forehead and grabbed the keys off the rack. As he opened the door he turned, paused for a moment and said 'thank you' with utmost sincerity before ghosting out the door.

He hopped into the family sedan, turned the key and backed out the driveway. As he drove down the street, he gazed at mothers shepherding their children to school, waving to some, patently ignoring others. Soon he would arrive at the office, and no sooner than that would a batch of files thrust onto his desk with an apology of sociopathic insincerity. The clock ticked ever slower as the head oscillated from file to monitor and back to file as more batches, more timelines, were constantly added. Finally, lunch would come; but there would be no lunch.

As colleagues and co-workers alike spent the afternoon belting the social winds of an impending typhoon, his grind began. With similar efficiency, the files began to dwindle, the piles soon to hit autopilot and productivity reigned. The oscillating now ceased, his office offered a shelter of calm as the floor beyond him morphed a frenzied natural disaster. The day was soon done. Placing his briefcase down, he casually walked, one foot after another, through the minefield with eyes destined only for a coffee in the breakroom - nary a glance. Coffee in hand, chest held high, he walked from the office.

At home, dinner was one the table but he hardly could afford the time. A quick bowl of cereal followed by yet another coffee was all he could muster. Darkness soon cascaded around the house, the moon engulfing the grass in a celestial glow. The man strode to the porch, making a single, resounding echo on the very first step. Eyes ahead he peered to the illuminated lawn, into the whistling trees and above to the glowing, vibrant, brilliant city. He rolled each sleeve up, crease by perfect crease one arm at a time, and looked at the waiting skyline, a sly smile cracking from the corner of his mouth and leapt into the night. The city would have to wait no longer; bright-eyed and reborn, the time to work, the time to hunt, had come.

The hunted has become the hunter.