The Wolf Is Out To Play

Share All sharing options for: The Wolf Is Out To Play 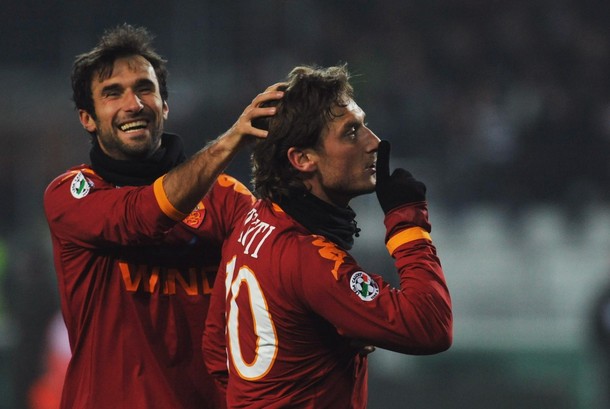 Timing is not merely everything, it is all things.

When Luca Toni went off after six minutes, it was unlucky. When the ball deflected to a well-offside Del Piero, it seemed the gods were conspiring on the day - a familiar feeling in Torino. And now, looking back, it would appear that yes, the gods were conspiring: for Roma. Another opportunity to overcome adversity. To turn luck into motivation; to turn motivation into purpose; and to turn purpose into glory. A test passed with two vibrant colors.

They are back - they might even be better than ever - and they are playing like champions. They aren't playing with wavering confidence, a mentality dwelling in the present tense, or fleeting belief; they are playing with steel and mettle and all that defines a champion. Simple, efficient, vengeful Ranieri football.

They weren't brilliant, they weren't dominant, and they were hardly the better team over the course of the game. Yet they guarded, lurked, studied, stalked, fought, right until the end, and finally, when their prey showed the slightest hint of vulnerability, took their trophy. They are no longer the dolphin, playful and jumping about with nary a care in this world. They are, after much too long, the wolf.

They are the hunter.

It would appear that late game heroics are rewarded with early week Coppa fixtures. Early festivities, with more then on this wonderful victory.