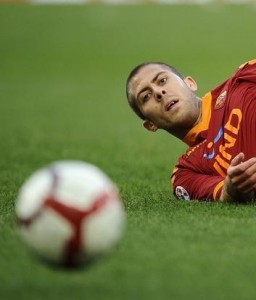 Dominating performance from one to ninety with an appreciated cameo from vintage Spalletti football. Nice midweek run.

Knocking the ball around the back waiting for the whistle in, oh, seconds.

90' Cicinho with a nice little run. Worth remembering he's a brilliant attacking fullback on his day, as Catania commit handball #128.

Perrotta misses another sitter. Love it.

88' This has, predictably, gotten quite boring. Catania didn't have a prayer at 11, much less 9, so it's all about the motions. Motions which are occasionally resulting in aRoman chance, but there's hardly a huge degree of purpose.

Perrotta misses a sitter. This is officially Spalletti football.

Campagnolo with yet another save. He's the only reason it's not four or five to nil right now.

83' Cicinho for Motta, who was fine but nothing special. Then again, how could he be when he wasn't being passed the ball.

Okaka, on the other hand, is far too unselfish and always looking for the pass before the cut/shot.

I wouldn't be surprised if Cerci gets subbed here. He had Taddei running in and he took the ill-advised shot once again. Send him to Bari ASAP.

Motta with another "what the fuck are you doing?" look at Cerci, who genuinely has no idea there are other plays on this pitch besides himself.

Okakchukamuthafucka absolutely screaming at Cerci - who was only looking for the shot. You get the feeling as to why he never plays.

Catania now doing their best to implode as Cerci does his best to ignore his teammates.

Soooo...game over? If they lose this one Ranieri might as well resign, good work be damned.

Cerci breaks to the line, cuts it in, Okaka plays it back and Daniele fires it home with the left. The only surprise is a positively giddy Cicinho in the celebration. Who knew?

Riise winds up, Riise shot down.

Augustyn sent off for tripping Okaka from behind. No question. Catania at 9. How about a goal now, yeah?

Campagnolo is the new Sorrentino. Goddamn above average Italian keepers.

70' A hammer from DDR brilliantly saved by Campagnolo, who is now firmly into putting on a show category.

On cue, Okaka is 1v1 but Campagnolo closes it and saves it. Shoulda, woulda, coulda.

Perrotta over the top as it's hoofed back. One of these days, Okaka will break.

Catania go for youth as Delvecchio comes on.

66' Pizarro missed Okaka over the top on the counter, but a Roman corner nonetheless. More the none part; throw.

64' This game has opened up like a broke hooker's limbs since the red card. Vintage Spalletti Roma.

63' Cerci playing the role of Baptista as he puts his head down, blatantly ignoring teammates, cutting to the left looking for the shot every...single...time.

62' Ridiculous clusterfuck near the goal line as Campagnolo plays the hero once again on the line.

And Cerci's decision making still comes in at a solid C-.

And down to ten, Catania finally work the ball into the final third for the first time this half. The ghost of Spalletti...

I'll give it another 10 mins before we see a Pit cameo.

60' Now down to ten, Roma's possession might reach a Barca-esque 90%. Or, if Spalletti is truly pulling the strings, they're about to be bounced from the cup.

Riise from 20...getting affairs in order...Daniele's free kick well, well saved by Campagnolo.

Taddei taken down from behind, last man as Catania see red for Belluschi's second yellow. This seemed just as inevitable. Catania's throwing an internal civil war leaving teammates out to hang.

56' Wonderful cut by Motta, cross is blocked as Sinisa throws a mini tantrum on the sidelines and pulls off Capuano.

55' Cerci put into the box with one man; fails. He's got Coppa star written all over him tonight, however.

53' Motta calls for the ball with space and pace; Cerci blatantly ignores him.

51' Taddei does dribblings like Menez, wins a yellow on Augustyn, who spelt his name wrong.

50' There's every chance Okaka won't be going on loan if the injury to Luca is substantial enough, particularly after putting his qualities on show this evening. The boy is just an embarrassment of richly physical and technical talents, yet hardly the finishing product.

48' Fecking brilliant show of strength by Okaka to break for space and create a chance that simply was not there. Finish went askew, but he was being draped over like a coat rack.

47' Cerci reaping immediate rewards as he's far more incisive and cuts in for a shot on net parried away for scraps.

What we do know is that attacking options on the bench are now limited to Esposito. And Pit. How appealing.

Cerci coming on for Menez it would appear. Ranieri clearly not a fan of Yeremy's first half. Or maybe a knock occurred. Or maybe Yeremy put in a transfer request during the half.

They've taken Spalletti on loan for the game, and offered up the maestro's glitteringly fluid football - complete with infinite chances and zero goals - which will undoubtedly result in a 50th minute counterattacking goal for Catania and the inevitable 2-1 Roman victory.

43' Okaka's not yet a fox in the box, but he is wonderful at keeping possession, holding up bodies and using his technique in team play. You know, all that targetman jumbo mumbo.

Daniele creates a tremendous chance for himself and shoots left at the top of the box. Goal still reigns inevitable.

42' Motta drills a cross all the way to Catania - the city - as possession is inevitably won again.

40' Unknowingly genius run begun by Okaka, Menez & Riise as Yeremy is eventually tripped conveniently before running onto the free ball. Technique is being put in a golden frame today and displayed for all to see.

39' Menez has been what you'd call not good, as David goes into the book for incessantly chirping at Mr. Referee.

37' Absolutely dominating possession culminates in a Pizarro-Riise 1-2 and hammer by John, so nearly left for scraps as Okaka rampages for a ball which is then swung to Motta and crossed in on the volley onto the head of Daniele, just awry.

35' I know not why, but Motta reminds me of a fawn: nimble, quick, light, fragile, vulnerable.

33' Nice little touch and run by Motta before he falls by his own hand. Or feet, as it were.

32' Catania break on the counter after the corner. Seriously, who let Spalletti in the Olimpico?

31' Brilliant turn of a header by Mexes even though he was being tested harshly for positioning.

Some serious flowing, one touch passing today as Perrotta nails the third straight ball off a Catania arm in the box.

28' Romans now dominating possession and Catania left to merely shoot at the first hint of space.

26' And for the second time Roma try to recreate Genoa 1-0 of last year. Perhaps this is by design. Or maybe Catania's left side needs to eat a sandwich.

23' Catania have the worst sense of where fouls occured known to man. Every one is taken 10yards beyond where the actual foul happened.

Who are they coached by? Ah, right...

21' This game is failyy open yet relatively slow. Hardly the high-flying affair, more a casual "let's not do too much work today but let's still win" feel.

18' Menez rotisseries one defender, fails on the second. A Yeremy assist on a Stefano goal sounds quite lovely today.

As Yeremy places a ball for John Arne Bolt - or so he thought.

16' Speaking of stupidly good, Okaka just leapt and brought down a ball fair few in the world could've via the chest. He is an absolute beast of a manchild with technical skills to boot. God is he going to be a player.

14' Okakachukamuthafucka shaved his head. Apparently the combination of his and Philou's hair may only be so bad and Mexes has taken more than his fair share.

13' Let's just mentally prepare for this now: at some point, Takayuki Morimoto is going to roast the back line. He might not score, but he probably will, if only because Roma is the only team against which he seems to reach his stupidly high ceiling.

12' Another corner to be taken by M. Menez. Nicely taken, yet cleared.

11' They try The Mexes Play off the corner; fail.

10' Okakchukamuthafucka finally gets a touch. His service has been coming from the calcio equivalent of an armless tennis player.

9' There's been nothing to say of the play thus far except it looks like a Coppa game on a Tuesday. Which it happens to be.

7' Note to Sinisa: Catania's shades of red & blue don't translate to scarves unless you happen to be a nine year old girl.

6' Oh no. We've hit an all time low with Mexes' hair, as Catania hit an all-time low in free kicks. How does one hit a ball 30 yards from goal right down the middle out for a throw 15 yards from the goal line? That's comically bad.

5' Capuano gets a boot to the knee from Simone; dies on the pitch.

4' The passing is very sloppy early, clearly a hint of hangover.

3' Perrotta playing more on the left, giving Menez a chance to do his work centrally. Should he so choose.

1' Speaking of red cards, we have a Mexes-Burdisso central pairing in view. Disaster looms.

Doni red card? I say he makes it to the second half this time. 59th.

Everyone shaking hands for a nice, casual midweek affair; Pizarro being dwarfed by one of the children standing with the referees.

Coverage beginning with an Olimpico which is absolutely...not packed. It would appear people have better things to do on a Tuesday evening than watch 90 minutes of quasi-caring against Catania.

And what does this say about Motta?

- Pit is definitely getting a run at some point today if they're ahead. I can almost guarantee it.

- Given the fitness difficulties of Okaka, combined with the assumed absences of Vucinic, Totti & Toni, there's every chance Ranieri has to dust off the 4-6-0 at some point. Who's for Taddei at prima punta?

Can't they just buy Morimoto at the half? For me? Pretty please?

- Re: Motta. He fit in under Spalletti, but he's clearly not the preferred choice under Ranieri. His form in the beginning of the year was Baptista-in-the-spring-esque but then he bounced back a bit before losing his job permanently to Cassetti. And it's not that Cassetti's been brilliant - he's had his moments - but rather the team mechanism is working so well why fuck with it? The problem isn't that they're sending him on loan - they've got that other right back in town - it's that they're sending him to a club which, if they like what they see, can make Roma and offer which they simply cannot refuse.

The important stuff: Serbian papers say that Roma have made a €5m bid for Ljubomir Fejsa, the latest stud off the Partizan assembly line. They've been watching him for eternity, it seems - I recall the rumors popping up right after the time they were linked to Nikola Pokrivac, then of Monaco, which I simply thought was Prade & Conti going through a former Yugoslavian midfield phase - so this isn't quite surprising.

And even more importantly: I'm a huge fan. Partizan is on the list of clubs which appeal to me for no good or sound reason - along with Ajax and Dynamo Kyiv (I think it's a youth system thing) - and thus I watch. Fejsa's quite legit.