Phrase of the Day: Curb Your Enthusiasm.

Share All sharing options for: Phrase of the Day: Curb Your Enthusiasm. 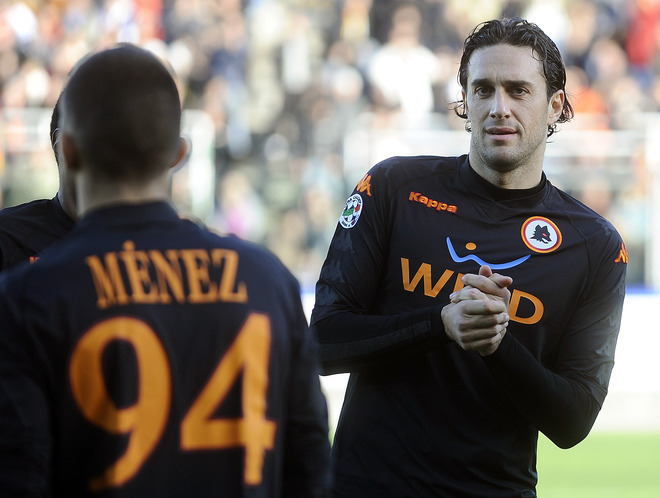 There's so much to look forward to today I feel like a small Asian girl in a Hello Kitty shop. But beyond Luca, beyond the table, beyond the clean sheets...Roma's playing again. Sure, it feels like it's only been hours since Parma, but two and a half weeks without Roma criminality on par with Vlad the Impaler, internet piracy, reality television and popped collars. The fan in me reigns supreme, and the fan is happy on gameday.

That said, the land mines are plentiful - Cambodian even. There's simply too much to be excited about, which is precisely the problem:

i. Luca Toni. Everything that's come out of Rome - how hard he's working in training and the surprisingly good shape he's showed up in for someone without much match practice - almost makes you want to believe we're going to watch vintage Luca Toni in midseason form just waltz right into Serie A. That won't happen. He's been here before, but he is without match practice and he is without Roman chemistry. We saw as much when he pointed to the spot where he wanted the ball on the Menez goal during the friendly. That's great to see in a friendly versus a Serie F- side, but that shit won't fly in Serie A. Five days is hardly enough time to build up a rapport, which means much of the onus to quickly form some chemistry with Luca suddenly relies on Daniele and Simone - the only two players on the list who've played with Luca in the past off the top of the noggin'. (Brighi/Cassetti/Motta? Possibly.)

It's going to take time, particularly for a player who is just as adept at setting up his teammates, so hoping for a perfect run 1-90 is a bit much. Give me 'solid' and then we're talkin'.

ii. The table. Roma's back where the belong, in the top four with footsteps echoing ever louder, but only just. Cagliari's in 13th, sure, but they're merely five points from the moneypot, and with a game in hand. In fact, if Roma lose and other results bounce the right way - or wrong way, depending on the hue of your tinted glasses - they could wake up Thursday morning outside of the European spots altogether. We'll call this mythical place 'Tajikistan'.

It breeds a false sense of confidence; one you'd hope - maybe even expect - would have no quarter in the Roman locker room, but they are merely human.

iii. Brakes on the momentum. They were on a tremendous run in December, holding the back like maniacs and playing exquisite team defense from front to Bertagnoli. That kind of chemistry requires a constant run of games, so whatever momentum they had is gone, gone, gone, whoooooooooa. Not quite an unknown quantity, but two and half weeks without games, with holidays and with a big new face in the lineup is not a recipe for snapping out of a cold slumber and back into the swing of a top flight match on the island.

iv. Sardinian home form. Cagliari haven't lost at home since October 4th and have only conceded three goals in four games since November the one. All, curiously, came against Napoli in the last Sant'Elia match.

It seems a little disrespectful to call away to Cagliari a "trap game", they're a good team, but it is. Roma, based on recent form, quality and the big new face in the lineup, should walk away with at least a point. But they can't depend on December's form, the chemistry to immediately return or that big new face to walk in cold and set the place ablaze.

This may be one of those days to pull on that Luca Toni House of Savoy blue - don't pretend like you don't have one - say a few prayers and expect anything, everything and all that lies in-between.

And as ever, make sure to avoid the most lethal four-letter word in the English language: hope.

Now we can just wait to see what Ranieri has up his sleeve and go from there...until he blows it all up and starts from scratch against Chievo.