Men In The Spotlight

Share All sharing options for: Men In The Spotlight 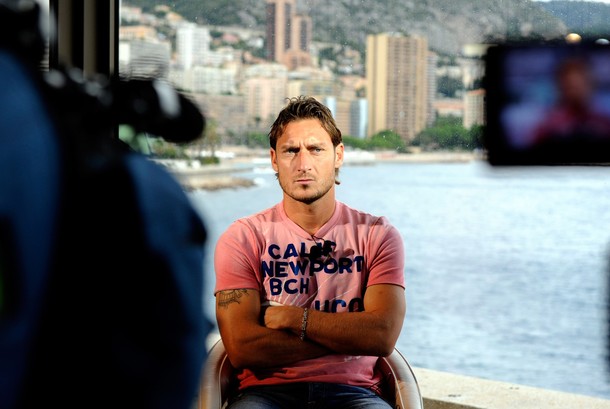 There are few awards on this earth worth the time of my day. Most are chosen arbitrarily, entirely upon a whim or based on repressed childhood experiences, and there are neither set rules nor a pattern, save for one:

No award is worth its weight in fleur de sel unless shoes are removed from the equation. 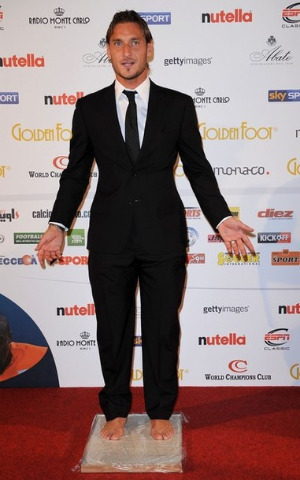 As you may now be able to tell, Francesco won an award. More specifically, he won the 2010 Golden Foot for golden feet, a golden personality and a nickname no one has used in about eight years.

Knowing little about the award, I did what I do best - dashed to Wikipedia.

Ten nominees are chosen by a panel of international journalists based on the criteria that they are at least 29 years of age and still playing. Out of this list, the winner is selected by an online poll, where anyone can vote.[2] The winner of the award leaves a permanent mould of his footprints on "The Champions Promenade", on the seafront of the Principality of Monaco. Since 2009, there has been a charity auction accompanying the Golden Foot event. The auction is held during the gala evening at the Hôtel de Paris, and raises funds for fighting AIDS.[3]

Better than any foot molds, moulds or any other spelling, along with something presumably gold, is the Brazilianization of the winner's name. Win a Golden Foot, and you no longer require a first name. Name? Totti. Just Totti. 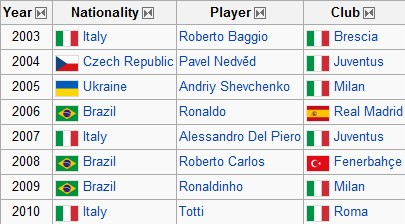 Nice award, but anyone with good sense has been showering Francesco with gold for some years now; anything more is just joining the chorus.

At one point a pseudo-punchline was going to arrive, but upon further investigation, I've come to the definitive conclusion Mirko Vucinic removing his pants is the greatest moment in Montenegrin football history. Astonishingly this was done without research, much consideration or even a passing glance at Wikipedia. Sounds like Juve's transfer blueprint.

Though the above two stories are largely unrelated, they've put two Roma figures a bit more into global focus. This has me entirely nonplussed.

Francesco's brilliant at football, deserves recognition for it? We know.

Mirko's out of his mind? Yeah, we've been basking in his insanity for years and loving every minute of it. Removing pantaloons and placing them atop head is arguably one of the more vanilla arrows in his quiver. Someday he's going to begin undressing an entirely unsuspecting Vito Scala; the next he may start brush Bruno Conti's hair, continuing on long after the smiles are gone and a palpable cloud of awkwardness engulfs the stadium, Mirko still carefully considering every stroke. That's just how he rolls.

Welcome to the Roma party, world. No pants? No problem.

(If that isn't in Curva Sud for Genoa, I'm going to be mighty pissed.)

The Roman half is happy; the Italian one not so much. But for the long-term health of both: kid could probably use a week off.

After all, that beard's not going to cultivate itself.

i. I've noticed that we're entering the time of year when gloves begin to make appearances and both Francesco Totti and Simone Perrotta dress like Nepalese yaks.

Just excited about it, that's all. Might play a game this year: who can wear more fleece gear on gameday? I've got Simone breaking the double-digit barrier.

Probably not, but a man can dream.

iii. Borriello is to be on the bench today against Serbia, which is only fair. The attack was mighty disjointed - passing was woeful - and something needed a bit of change; Cassano's obviously integral and Pepe still has those dirty texts from Giancarlo Abete, so Marco it is.

I have more faith in Italy winning the group than I do in Roma's luck of having Borriello stay uninjured for 60-90 minutes. Breaks all around.

iv. Goals hit with the left foot of Thor are almost entirely dismissed when one celebrates with pants on, but it's worth noting John Arne Riise wears short sleeves also scored on Friday.

Have yet to check the official info, but I'll just assume this match was played at the San Siro.

v. Unfortunately for John, this post is not devoid of questionable decisions around other men, much like Mirko.

vi. And finally, Rugantino before he became Rugantino.