Men On A Tightrope

Share All sharing options for: Men On A Tightrope 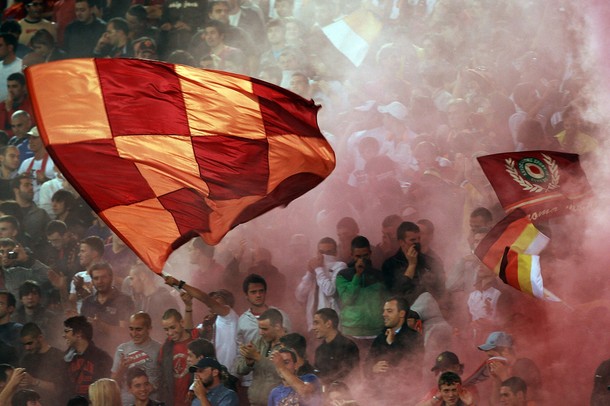 At some point, AS Roma will become a normal football club. One where expectations are set, lofty or moderate, and expectations are met with neither drama nor fanfare. Just a football team playing of its means towards a reasonable goal and traveling in something vaguely resembling a straight line.

I hope to never see that day in this lifetime.

Very few teams could go from relegation to a 24 game unbeaten streak to within a sniff of the scudetto back to the relegation zone to winning the war against Inter while being the only team on this green earth to hold Samuel Eto'o at bay to being so full of confidence yet teetering on the brink of renewed destruction. Roma is one of those teams.

As far as I'm concerned, they're riding a three game win streak. Brescia was a win, with the three points hovering between the pitch and the small little trunk at Trigora which holds the team's morale and is guarded fiercly by a little gnome. Inter was a win in a multitude of arenas - in the table, even - and though Cluj required the occasional post, they played a fine game after two very excellent games. It's allowed, and it's promising.

And as far as I'm concerned, it can all come crashing down against Napoli. The break is a chalice whose brim is laced one half with sugar and other half with poison: drink from the kosher half victoriously and the nectar beneath will have never tasted so sweet; head to the beverage with a tongue of poison and the knees shall fall first, the head soon to follow. In other words: go in with a win and build more confidence; go in with a loss and it's back to a depressed state and an emotionally weathered team. Perhaps even inevitable doom.

I needn't look at the injury list or teamsheet this time 'round; this one's on Claudio to do what he did so often last year, some might even say 24 times in a row:

Whomever, however, with whatever, don't come home emptyhanded.