Will The Real Roma Please Stand Up?

Share All sharing options for: Will The Real Roma Please Stand Up? 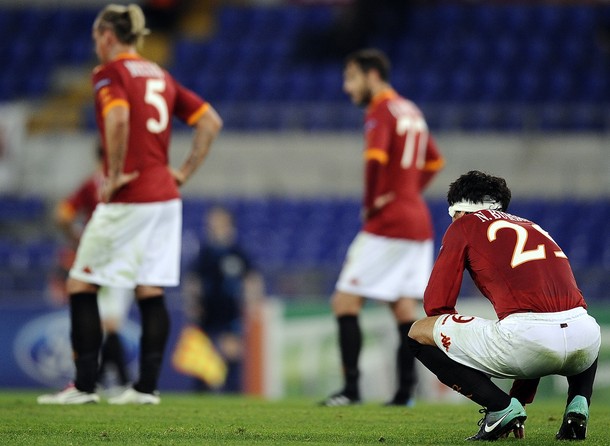 This is rather simple: if Genoa Roma shows up, all is fine and dandy. And, to be honest, I fully expect that to be the side so long as all the king's men can put the midfield back together again.

If Basel Roma shows up, Rosella may find some supreme pressure from Unicredit to do something drastic, with the bids for sale coming in a number of weeks I believe. Rititro is guaranteed, a motherly lecture likely and Claudio can finally find some real pressure from within.

In injury news, Julio Sergio and Mirko return, while they lose Simone Perrotta in a net change. Do you suppose the football gods are punishing Ranieri's non-use of subs with injury subs of their own?

Lobont hasn't been particularly decisive since, oh, the SuperCoppa, but SuperSergio does seem to save that which should not be saved, so it's a massive boost - so long as he's truly fit. Given the state of affairs, I expect him to hobble off in the 34th, this time Claudio in tears, being held up by the training staff.

Mirko? Well he's a wild card, because he's always a wild card. You don't really know what you'll get from him when supremely fit, so right now, his fitness and contributions should be categorized as 'TBD'.

Rather fitting, since Roma can be filed under 'TBD' too.

Mirko isn't fit and yet rumors of a tridente persist. Equally likely, I suppose, is a 4-3-1-2.

If he's not yet fit - and let's be honest, he's barely allowed to play 90 when in the shape of his life - then I'm fresh out of ideas. Possibly a supersexy Riise-Castellini duo on the left, putting the fear of lesser gods in the hearts of Parma.

Or even...Julio Baptista from the off.

Yes, that's what it's come to. These are dire times, my friends. Dire times indeed.