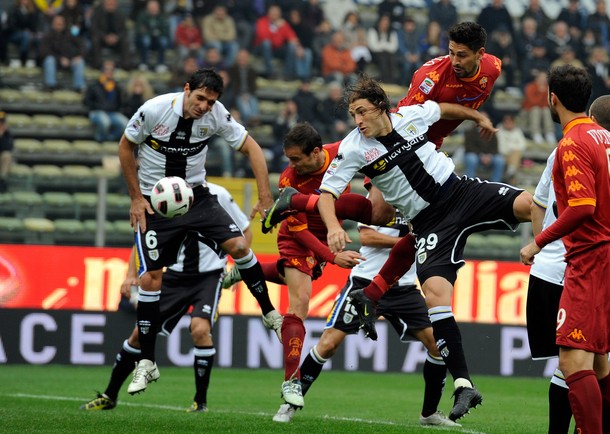 The game's on again, somewhere in the background, but it wasn't worth watching the first time, so it certainly isn't a second time. They were neither good nor bad; something of a combination between Genoa and Basel. They showed up to defend, but not much else - and I suppose if we're deciding between defending and attacking, they chose correctly, so there's that.

The first half was just awful. It was as though they'd been introduced in the locker room, and to say their was no rhythm in the attack would be to say there was an attack at all. Something which, I suppose to be fair, isn't really shocking considering the state of the lineup. Taddei went down in the pregame - hey, it was better than OT - and in comes Cicinho, playing a position which seemingly bewildered him. Well, he bewildered me. When he's playing in defense, all he seems to do is attack; yet when he plays in midfield, he won't. Or can't. Or maybe I've just blocked it out.

To get an accurate portrayal of the first, here's a snippet of comments I read through to remember what I'd blocked out:

- Pretty sure they all met for the first time in the tunnel today.

See, even I couldn't put it together. (Granted, I was going on several minutes of sleep.)

I was shocked when Mirko entered the pitch in the second half. If Inter was Mirko's legend at its very finest, this was certainly (an injured, unfit) at the opposite pole. For all the shit stirring linking him to Inter or Real or ManU, he looked like he'd been swapped to Parma in the tunnel. He was really just that bad, but through little fault of his own. In hope he'd have come on for a run late in the game, never as a starter; ideally he wouldn't have played at all.

The Francesco sub was, for whatever reason (I'd read the were rumblings he'd contracted Simone's flu before the game, but if it was tactical then so be it), correct. Mirko had the legs to run possession into the waiting feet of the Parma defense and Francesco had none at all. Simplicio at least ran that way. You know - provided an option to fill space between the striker and midfield. He also retained possession (!). And hit his passes (!). And made a difference (!). And made me wonder, once again, why he doesn't play.

And that, today, is the only thing I can hang on Ranieri. At least tactically. He was again chopped at the knees with the losses of Taddei, a man who runs forward, and Simone, another man who runs forward, while being forced to play an unfit man who, when he did run forward, casually handed the ball over with a sheepish apology. Drop a number of fulcrums with no adequate replacements and I suspect even the most refined of machines will struggle to run smoothly. The calls are hard to critique given the limited options with which he was presented.

The rest, I just don't know. Julio Baptista, the only thing sticking in mind, has lost all favor in these parts; he apparently has a .4% chance of winning these games by himself with a 4% chance of blowing it. I suspect he's a man seriously, seriously hurting for the match practice he's not had in nearly two years, but it's a little difficult to be sympathetic when they play football in Greece and Turkey too.

The saving grace was the defense. More to the point: Philippe Mexes. We've been waiting to trumpet it for the team seemingly for eons, but we'll have to start small:

And that itself is by no means small. Burdisso and Juan was wonderful last year, but Crockett & Tubbs was, on their day, the best in the league. Having those two back patrolling the deep center isn't just a nice excuse to post Miami Vice jpg's (soak it up), but the basis for a football team, the basis for results.

"Ranieri is untouchable. We have unlimited faith in him and without a shadow of doubt we will keep going with Ranieri.

"Obviously there are regrets at the result today, as we ought to win these games. At least we can begin again from a clean sheet. It had been quite a few months since we'd picked up a point away from home, too.

"We started the season in a strange way, but we have all the time it takes to turn it around.

I have bountiful faith in Ranieri. I do not have faith in either he or anyone else being able to point out what exactly is wrong. There are just too many little things which continually conspire each and every game not to cripple them, but to cripple their chances at finding a rhythm, finding confidence and most importantly, some sort of combination of the two. Enough to say "well, they should've won, but the rational person inside sees why they didn't". What that is, I just don't know. It's neither routed firmly in the tactical or the mental, two quasi-tangible facets which have firm beginning and ending points to which we can point and say "fix". This lies somewhere else, deep in the abyss that is the je ne sais quoi.

Taking a cue from the one man seemingly building himself back up during the difficult times, maybe they should all follow the lead of Philippe Mexes. Maybe it's time everyone got neck tattoos. It can't hurt, right?