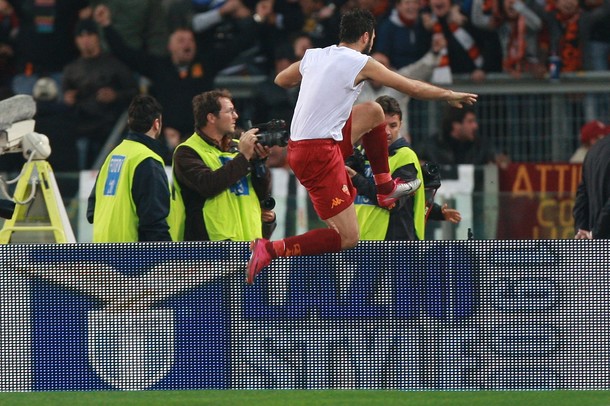 There's a game today. I suppose it's a trap game by definition. Well, perhaps it's a notch about the trap. A 'caught game' maybe? Perhaps.

The derby fever is a lot bit worrying. Not so much the celebration itself - party on, my friends - but more in regard to extending derby superiority into the domestic front or even three fronts doesn't even work. For one, it's not like beating Lazio is terribly impressive. Their opening year wins read like a who's who of the May relegation battle. Plus it was really...simple. Almost too simple from a footballing perspective. I know the basics work, but it shouldn't be that easy, should?

However, it's creeping into all facets of AS Roma 2010-11. There's Vucinic claiming the clouds have been lifted, which is perfectly fine - after all, confidence and morale can do just as much as technical ability sometimes - but those surrounding the club are laying a foundation for overconfidence.

That aforementioned worrying bit is the scudetto talk creeping up; a sentence here, a headline there. Just because a heroin addict finally kicked the habit doesn't mean it's already time to have him run a kilo across town. This team is and always has been on a tightwire of mental stability; one wrong step and they don't just tumble, someone's trying to track down the dental records. And though a lack of confidence is the death knell, too much has done its fair share of damage over the years. Constantly fucking around with teams, declaring their superiority in the first few minutes then mailing in the rest of the evening for a solid nil-nil draw against a roll-over opponent. Something like Narcissus, only when they find the pool, someone manages to reel them back into the woods eventually.

Fortunately the upcoming schedule makes Lazio look like the creamy puffs that they really are: Fiorentina, Juve, Udinese, Bayern, Palermo. None of those are terribly easy, though I think I see Udinese waving from the plane, and we know Roma does the difficult better than the easy. (Yeah, that was Udinese.) To be honest, I'm more confident going into this stretch than I would against the tomato cans laid out for Lazio to open up the year. It's far more plausible they pull back-to-back wins against Juve and Bayern (I'm penciling in a draw this evening...1-1 or 2-2) than it is they pull six points from Chievo and Bari to kick open December. (Let's write that one down as well.)

That's just how they roll.

So the derby's great and it's wonderful to see Lazio coaches, players and fans using their subbasement intelligence quotients - it's like listening to Inter fans - to dissect the refereeing in that game (here's a hint, guys and dolls: Greco scored, Dias was off and Stendardo took out Liechtensteiner all by his lonesome), but I'm more excited that they put in a solid 90 minutes of football for roughly the third time all season - lots of decent 60-70 minutes showings, but the rest is every M. Night Shyamalan movie: mailing in the final twenty - in anticipation of about four derbies should they want me to believe this 'scudetto' business has any merit.

Well, it's certainly got more merit than Lazio right now, at least. I'm still promising that postcard on the way by.

i. I'll be launching an immediate "fire Ranieri" protest if Greco doesn't get minutes.

ii. If he scores within the first 7 minutes, I'm going out, adopting a baby at the local crackhouse and renaming it Leandrogreco. Because I'm gonna be first on his holy bandwagon.

iii. The first person to whine about RomaNews' projected 4-4-2 is going to be bitchslapped with a hastily spliced jpeg of Cicinho and Juan Manuel Vargas taped to the back of me hand.

Simone will be on babysitting duty, €10/hr plus free run at the fridge. Deal with it.