It's Leandro Greco's World, We're Just Living In It

Share All sharing options for: It's Leandro Greco's World, We're Just Living In It 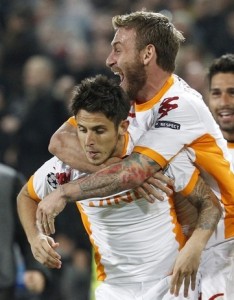 Excellent win, even if conceding twice isn't exactly the ideal outcome. They really dominated stretches of that game and looked every bit the team we hoped they'd be coming into the year.

Totti wins a foul. He and Baptista should run clinics during the offseason.

Useless cross by Rosi when he should've gone to the corner. He's starting to remind me of Cerci - highly energetic, skillful, but lacking upstairs.

4' added, 3+ of which will hopefully be spent with the ball at Totti's feet. Corner. He's exquisite.

90' Awesome. This one's not over. D'Agostino wth just as good a free kick as you'll ever need to see from 21m or so. Once the foul was committed, there's nothing which could be done about that.

Hey Prade, continue to do nothing.

88' Francesco's glory hunting as well. Boy, he just made a fool of Bolatti. Old man's still got the moves.

87' Riise going for glory as everyone else is sort of half-trotting with Juve on the mind.

Dangerous Viola cross, even more dangerous Simplicio non-clearance. He gets a pass.

Rosi paying immediate dividends with a run to the touch, then cutting the ball back to Simplicio, who was about 12 yards behind him, for for a one-time shot saved.

If he'd just settle his temper, he'll be yet another asset.

Rosi for Cicinho, who played perfectly well. Is he still flogged for a check in January? I don't think so.

82' They'r really putting some moves together now. With Simplicio getting some game time, the fluidity of the team has increased tenfold.

80' And away they go again, looking for a nail in the coffin.

As much as that's on Boruc, what a gorgeous ball by Mexes to force him out with the never-to-be-taken-for-granted nonstop running from Simone.

Welcome to the Artur Boruc show, ladies and gents. Mexes went long - real long - with a brilliant, curling ball onto Perrotta, but it wasn't cleared by Boruc, who whiffed, and Simone with the tap-in.

Matteo Brighi now coming on, presumably for Greco, who's limping around.

Yep, Greco. This may be his indoctrination as an AS Roma midfielder: not officially one until injured in the course of duty.

72' Back into possession, but quickly lost. May be time for a Mirko sighting shortly, since they lost the legs with Menez.

(Burdisso probably could've done more to try and get in front of Gilardino there, but it was an excellent goal. And I'm guessing Riise was somewhat to blame, but I missed the buildup.)

70' Where's Greco? He's gone a whole seventy without putting the goal in the back of this net; he's about 68 minutes late.

Obviously. Game back on - Gilardino goal with a nice flick.

I remember this Roma too.

67' Borriello manages to head the ball over the net from about five when it would've been thrice as easy to just score.

Corner, Totti wants a handball. Another lovingly worked move across the width of the relevant pitch.

Perrotta for Menez, who's getting a big hand. Boy's got skillz.

62' Menez is having a field day with the space. In fact they all are, but what's more important is noticing that Roma knows how to maneuver Fiorentina to create their own space, whereas the Viola try and take the space afforded to them.

Almost like grown men playing with a team perpetually building with youngsters.

61' Greco with a faintest of backheel flick-and-turns to Totti. Yes, that's in the correct order.

60' I swear Mihajlovic gets his scarves at the big & tall store. They were always extra bulky at Catania too.

57' The gap between the two is widening by the minute; Roma looks about four leagues above Fiorentina right now, will be five by the 65th.

Mexes just owned Mutu in the box, not a hint of foul. Like stealing rock from a crack addict.

Honestly, he should probably be removed from the game. That was just bags of quit.

Fiorentina's doing their absolute best to get Mihajlovic fired at times.

50' Fiorentina's doing their absolute best to get Mihajlovic fired at times. I see this as a trend throughout his coaching career.

48' Menez offside for not being offside. They'd missed the window anyway, it appeared.

The scoreline aptly reflects the game: Roma's dominating the majority, and each team has had a goal saved.

A few too many heart racers down JSB's end, though. Like I said: good movement from the Fiorentina central attack.

47' Vargas launching bombs and I'm getting letdown flashbacks. No dice.

Greco made that happen with a bunch of simple hard work to win the ball back and then keep it in possession. This kid's something.

Greco with hustle t win the ball back.....and again.....SIMPLICIOOOOOOOOOOO. Tap in after the flick (maybe?) by Borriello.

Daniele may have just hit his first decent midrange pass all game long.

43' And as soon as I say that, Totti takes over playmaking duties on the right, threading passes and directing traffic. As usual: pay no mind.

I'll say it: Totti's been invisible. But it's rather important they work him into form, so...Mirko for someone not Totti in the second. Probably Menez's shoulder.

41' Greco goes for a body-contorting volley and misses. (The goal, not the ball.)

39' And JSB palms the in-swinging corner out of danger. I'm not sure I've ever seen so many body-contorting saves in my life as this game.

37' Absurd backheel flick by Santana onto Gilardino, headed wide. A goal which would've been deserving of a standing o no matter the scorer.

Borriello just manhandled a yellow shirt to keep possession; as upper body strength goes in Serie A, he must be near the top. Just a beast with the ball at his feet.

This would be 1-0 but for Boruc's reflexes.

36' Corner results in nothing but lost chances.

Riise is being afforded all the space in the world as he sends in a long cross and Simplicio volleys, saved by Boruc. Helluva save on the tough angle.

Menez bundled, no free kick when it was certainly worthy.

33' Making quick use of that Viola left now....Borriello hits one wide with the right. Well wide. Marco likes his left, now.

Simplicio just knocked Pasqual into last Tuesday with a backwards somersault. Running off the pitch like he was just in a car crash.

30' Dodgy offside call against Fiorentina, and Menez's shoulder wins another yellow, this time against Santana. It may be mush by the end of the game, but the Viola will have about three players left, as Simplicio makes amends with a rather impressive back check.

Burdisso and JSB save the day, on the line. Honestly, that was an astonishing intervention by Nico.

23' Marchinni with a fortunate bounce about 4 yards from net, but finishes like a winger - which is to say he didn't. Quite lucky there.

Menez shoots but it's just wide. Fiorentina's being felled easily by these cutbacks - first Cicinho, now Menez, who's now looking like he'll be limited to 4 innings tonight. Bum shoulder.

21' Cicinho attacks! And crosses! And Borriello forces a save from Borux, who was about 89% in side the goal mouth, but kept the ball out.

19' The movement of Fiorentina's central attackers without the ball is causing me dyspepsia, which will hopefully dissipate upon the first offside call or something.

17' Greco throws a nice ball to Totti, but it's a bit late and he's offside.

There's that timing/pacing thing again. Luckily, that will come with time.

14' Back into possession. The most surprising thing today is Cicinho apparently has instructions to defend. I didn't realize he has that setting.

12' Simplicio's playing almost up top in the attack and they're peppering balls in and around the box. Fiorentina may want to stack the box with eight again if they don't want an early 1-0 hole, cuz it's comin'.

Riise winds up and tries to sterilize a Viola defender.

Borriello beats the defense and Boruc, but flashes it just across the goal mouth. Boruc sort of cutoff the angle to goal, so he gets credit.

11' Menez about to re-enter looking like he'll be limited to 5 innings this evenin.

Menez clipped as he was going on a run by Fiorentina's capitano. Shoulder hurts, and I see red in purple's future today.

7' Fiorentina looks like Roma defending a lead or breaking out of crisis mode: flat 4-4 with the rows about 2 yards from one another.

5' I joke, and I do love Greco, but he clearly has had some hiccups dealing with the speed and pace of the little things in Serie A.

You can't usually say that about this league, which makes it almost impressive.

3' Already dicey situations for Fiorentina in the box, with Greco lurking.

I can live with this too.

1' Cerci on the right no longer gives me heart palpations. And he's still a potential red card.

I can live with this.

And they're onto the pitch.

I struck myself in the foot with that plumpness comment.

Streams: MyP2P; atdhe. (Looks to be plump with options.)

I wasn't planning on liveblogging this'un today, but I was quickly convinced upon the release of the starting lineups...

While some may question leaving Mirko on the bench, I don't. We all know Mirko only gets up for big games and big teams, and teams coached by Sinisa Mihajlovic fall under neither category.

Expect to see him on the bench Saturday too.