You Can't Have My Mojo

Share All sharing options for: You Can't Have My Mojo 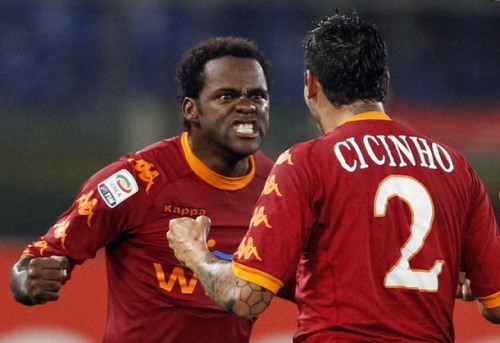 What's funny is that on the balance, Roma deserved the three points no question, but the goals, that which ultimately decides the game, let's just say thank you to Fiorentina. Boruc gave up the third while Gamberini just seemingly gave up on the second.

And yet, totally deserved, totally Roma. Easily the dominant team in both possession and quality, this was, to a degree, everything we've been hoping for, some might even say expecting, since Borriello was stolen from Milan. Not just on the pitch, but off it as well:

Want to rest Mirko? Go for it. Borriello, Totti and Menez is a three-coconut monster. Oh, Adriano's on the bench too? All the better. (But don't get him near the coconuts.)

Cassetti's suspended? Cicinho, Afterthought No. 34 from the summer's nonmercato, will step in against a dynamic attacking side and not miss a step. (Rosi was rumbling too, although his actual position is up for debate.)

Pizarro out? The midfield looked as smooth as ever. Fabio Simplicio might not be a true playmaker by trade, but that rolly rolly mother makes plays.

Leandro Greco looks the business? Fine, give him a start. Give everyone a start. Hell, play Rosi.

These were the options talked up at the beginning of the year and Ranieri was finally able to use them - a little bit of health, a little bit of luck, and a much improved mentality to thank. The team looked excellent, yeah, but there was an answer somewhere if it didn't. I mean, Mirko Vucinic on the bench. How long has it been since Roma could arguably put its most important player (yeah, I said it - and I've been saying it for about 10 months if you've been paying attention) on the bench against a top 8 team because the coach wants to and thinks he can?

This was bigger than the derby for me, on paper at least, but was made possible because they built off the derby. Like Claudio said, the guys just looked like they were having fun, like it was just so damn easy once again.

They've got the mojo, and you can't have it.

And now, another big test in just two days.

At this point, I'd prefer they run through a top 10 team every third day for the next month. Keep that mojo flowin'.