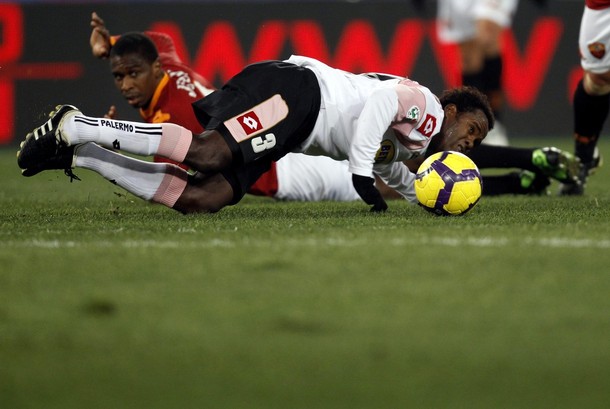 Palermo's goals scored during each of the last four games against Roma: 3, 1, 3, 1

If this isn't representative of these two clubs, then I don't know what is: Roma's in a process of constant evolution and improvement, while Palermo's in a stagnating closed loop pattern - a system which obviously works for them, but has its ceiling as they're going to be constantly forced to rephresh.

So with this information, why even bother watching? 5-3 Roma, with Fabio Simplicio in tears after his goals - both times.

(Well, aside from the small fact that 5-3 games are flippin' awesome.)

Slight problem here: Pizarro's making his starting return from a lengthy layoff (Bayern wasn't enough of anything), Daniele De Rossi is a Prandelli sighting in the stands away from yanking his hammy and Simplicio...well, I'm not putting an emotional breakdown past him today.

And all this with Greco, Taddei and Perrotta out injured, leaving Matteo Brighi in the role of Mr. Fix-All*. Getting sudden flashbacks of the Cicinho in midfield experiments of The Great Injury Crisis of 2008/09. Sort of like Holocaust survivors, but with more neck tattoos.

Genuinely though, that squad list is rather thin. 'Tis a good thing this week's off til Saturday.

* - That briefcase Claudio will have in the technical box, the one which glows like Marsellus Wallace's, at least to Claudio, has a small box inside labeled Break in case of emergency; enclosed within is a small scrap of paper on which is written "4-4-2" with Castellini at midfield.

You know he wants to.