AS Roma: Shipping Three At The Renzo Barbera Since 2008

Share All sharing options for: AS Roma: Shipping Three At The Renzo Barbera Since 2008 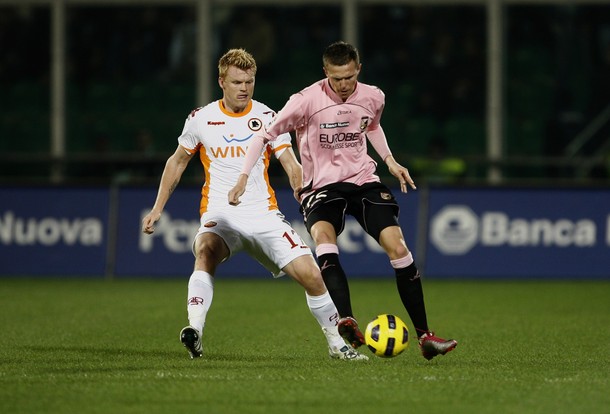 Well, this is what happens when one team starts swapping shirts before the game. Palermo played with about 15 legally - and I'm not saying that as in Roma failed to accomplish certain objectives; I'm saying that because Roma was not only serving Palermo, but leading them with ball after ball. If this was, oh, I don't know...Sicily, we might even think a few of them threw the game. The bad passing and turnovers looked like a point-shaving clinic, only they forgot a major fundamental differences between football and every other spot: scoring ain't easy.

The passing was atrocious, defending abysmal and the midfield a shadow of what it had been the past few weeks. Obviously there are allowances for David Pizarro being out during that time, with no one expecting he play lights out, but disrupting the construct of the midfield and combining it with one of David's finer implosions led to disaster; disaster which is on Claudio.

The 4-3-1-2 with Daniele at the belly of the beast had been a key to the turnaround. Why fuck with it? Or why not rip it up at halftime when it so clearly hadn't been working?

The defense was less than optimal, we can say. Riise was ginger at the top, red in the cheeks and pink in the shirt. Juan looked out of sorts as well; judging by his lack of zip, I'm guessing he might not have played but for some sub minutes later on in the game. Timing was off, pace was off, movement was off - everything was just off.

So guess who goes on the shit list again? Burdisso. His red cards are awarded with a suspension and an obese gnome, possibly from the Ribeiro family, for the team to piggyback into the next game.

Oh, and Marco Cassetti hasn't made a legal tackle since 2008.

During the Bayern game, one of the English broadcasters was busy plumping Menez, quoting Claudio's theory that Jeremy doesn't know just how good he can be.

Today, I thought he'd dropped both names and was requesting to go by His Awesomeness, Sir Cat's Pajamas. Both Borriello and Totti were visibly frustrated by his selfish decision making on a few occasions, and this lack of self-belief was nowhere to be found, instead replaced by a giant parade balloon of his head, slightly scruffy. Turns out he's talented as can be, because he was still very effective, but had a bit of Cerci's Syndrome, which is not, in fact, Down's Syndrome for the hair, though it could be.

And this was a large part as to why Borriello was marooned on an island all game long, his only touches when he pulled a Cruijff and dropped into central defense to grab the ball for himself. Does this mean Zampa spent the final whistle yelling "Jack Sparrow! Jack Sparrow! Jack Sparrow!" too? Because today I might actually get the reference.

Totti wasn't much better, or better at all, as we get closer and closer to talking about Things We Don't Talk About. Of course this in the same week as Bayern so...I don't know. I'm fairly convinced his biorhythm has reverted to an off cycle, and he now needs another knee injury - now also known as the flip switch - to find some form.

Is Rosella still going ahead with trying to sue Julio Baptista for being the shit-stained albatross refusing to budge from the Good Ship AS Roma? If so, entering today's performance into evidence there's not a judge in the land who'll side with Julio.

Though this is as much on Claudio as it is on Baptista's suckitude; hasn't he realized Wholio's useless before the 85th minute?

An offering on the subs: the Cicinho substitution was justified, at least in my mind, by the fact that he's the best crosser on the team. That's your attacking weapon off the bench.

Not quite Mirko, is it?

But it's not the end of the world. They were awful across nearly all fronts, which is something of a pattern when they come out looking like Jeremy's self-belief in the first fifteen, and very few are absolved. Maybe Julio Sergio or even Borriello, but then he didn't exactly force himself to be found. They won't be this bad again anytime soon, and I trust the most important man in the picture, Claudio, learned a lesson or two.

So you know what game this was? It was Juve's Olimpico demolition of two years ago, with a lesser degree of injuries and no Filipe sightings. You may remember that in the months before the game, Spalletti had finally tinkered with the formation and dismissed that which was no longer working, in essence finding that which worked: anything but the 4-2-3-1, which had quite obviously worked in times gone by. And then against Juve he suddenly resurrected the 4-2-3-1. And they were crushed. Just as they were against Lazio and Fiorentina, at which point it was shelved after five games.

You know what's worked for this team? 4-3-1-2 with Daniele De Rossi as the anchor. The midfield just works. It's dominant, and it allows its most dominant player to dominate. This isn't last year, nor is an unfit David Pizarro going to suddenly walk into last year's form, and when that happens, they're going to get destroyed on the counter. You stick with what works right now and most importantly, difficult though it may be, you stick with what works. They don't hand out trophies for idealism.

Pricey lesson, but a lesson nonetheless.

On the whole, it's slightly palatable. After six games in twenty days, against the likes of Basel, Lazio, Fiorentina, Juventus, Udinese and Bayern, maybe we shouldn't be so surprised they laid an egg in a difficult place to play against a good team. Week off, take a break, regroup, and come back against Bari with a bit of humility.

And furthermore: no scoreboard watching in November.

(But seriously, ma, everyone else dropped points too!)