180 Minutes To Get It Together: The Second Half

Share All sharing options for: 180 Minutes To Get It Together: The Second Half 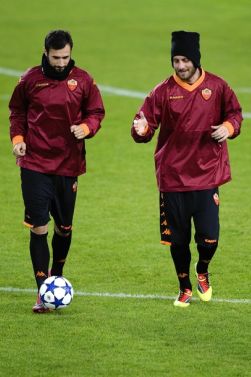 Very good first half, acceptable second half mixed with a dollop of the unthinkable from Ranieri which turns out to be an absolute stroke of genius, and above all, the result.

But really: Leandro Greco, ladies and gentlemen. Tis a time for reflection.

92' Basel now having to work the ball forward and they manage to get it down to the boxwith a shot off, but JSB flies out to conquer the day.

Corner, which means Francesco will spend the next few minutes killing time. Now fouled, yellow for Stocker, and he's off. About fifteen minutes late.

Shaqiri volley blocked in the box. A rather danerous opportunity as Borriello's on the run....slowed down. Wehre's Greco? They need a goal.

89' Still being pressed back, Totti wants a foul, none given.

And now I have no stream. Am I being mercifully held back from a Guillermo show?

Stream went out, and I'm contemplating leaving it off for the next ten while doing a number of rosaries.

Basel goal. This game is not, was not Guillermo-proof.

82' Also: prima punta Borriello did wonders in holding up the ball so that Greco could run onto the shot in his moment of glory.

80' Seriously. Can they get through a game without some sort of worrisome injury?

Nico's off on a stretcher in obvious pain. And suddenly we need The Saviour, Leandro Greco, to nick another one.

More extracurriculars after Stocker curb-stomped Nico Burdisso's ankle. And now he can't walk. And now Stocker is down. What a shambles this game's become.

Nico's done. Just done. Is a two goal lead Guillermo-proof? Probably not, but here he comes.

That boy is a fucking goal machine.

A slight bit of madness in the box as the ball is bouncing every which way like a superball, eventually parried for a corner by SuperSergio. (Or the post.)

Greco for Menez. I didn't think either Jeremy or Mirko would play 90. Seeing Greco today? Didn't expect that.

72' Gorgeous holding up of Totti in the box but couldn't quite get the angle to feed Simplicio.

Seems there was a little too much confidence this time. Not quite last year yet, is it?

Mirko off, Borriello on. Little more hold up.

69' Basel goal with the back turned. Own goal (at least I think it was off Juan's shoulder), poor communication between Burdisso and JSB, with a bad header from Nico to boot.

67' Stretching a number of passes together before Riise decides enough if enough and hoofs it to a red and blue shirt.

65' Nobody's moving forward now - no support for the attack - which, again, brings back reminders of second halves last year.

Basel just missing a wundergoal there as well.

Daniele with the ball over the top to Simplicio in the box, almost hesitating for a second as the man next to him wasn't....next to him.

Like last year all over again, which I think we'll all take.

60' Roma's been pegged back for the last several minutes, without really creating any sustainable attack or counters.

57' Safari with a casual chip from 25 or so. With JSB on the line. Let's hope that was intended as a cross.

55' Stocker with an extravagant leap after being fouled. They're putting on quite the show here in the second half.

Frei goes off the wall, hits Mirko in the face, and now he's throwing a bitch fit because play is stopped. Excellent theater.

Yapi Yapo had a running shot lined up at the edge of the box and somehow managed to hit it behind him. That's a special kind of incompetence, that is.

50' Basel's like a troupe dedicated to Pippo Inzaghi. All offside, all the time.

49' Perrotta yellow because he yelled at Shaqiri for diving. This is turning very feisty.

47' Stream's dropped, but Basel wants two pentalties in short order. Streller just hit DDR and Cassetti's about to be sent off here.....Streller going off.

Double yellow. Cassetti wasn't yellowed in the first half apparently.

A solid enough first half. They've countered Basel's strengths well - namely with the counter when Basel pushes forward - and defended enough in the center of the park to make up for the fullbacks having a nightmare redux from the home leg.

On the individual level...Menez is out of this world, Cassetti needs to be checked for an acute bout of Down's syndrome and Francesco's passing is doing more for Basel than Roma. Can't say that often.

45' 1 min added. Francesco clearly fouled, Cassetti given a yellow for a foul when play is allowed to continue. This hasn't been a brilliantly reffed half.

A corner won but Totti, who's having a pretty bad half, goal aside, flubs the short play with Menez. And yet, another corner won.

43' Menez appears to be wearing jetpacks in his shoes today.

Otherwise, not much of note: Basel pressing; Roma trying to counter.

41' Mirko with a horrible, horrible pass which ultimately leads to a dangerous free kick. This seals his second half goal, I'd think.

Fortunately, nothing comes of it.

39' Easy header nabbed after a flowing move from Basel. They're really quite technically good for a Swiss side.

34' Of course for all their passing, there's no Borriello leading the line to break beyond the defense.

And someone warming up. Maybe Little Burdisso. 2-0 is simply not safe.

33' The passing is becoming more and more fluid, which isn't surprising considering I bet this is the first time Menez, Mirko, Totti and Fabio have ever been on the pitch together.

31' And yes, that was Francesco's first this year - any way possible to get him back on track.

29' If it weren't for putting together some chemistry and various methods of attack, I'd say just hand the ball to Basel and allow them into the final third every chance possible. Yeremy and Mirko are having a field day.

Well then, this feels good, doesn't it? They're pulling a Basel on Basel - eating them alive on the counter. And a cheap corner just won at that.

23' Menez run.....peno! Riise! That was all Jeremy with the backheel. An excellent, excellent solo runand John is going in 1v1, hauled down by his shorts.

Another break for Mirko.....slowed down, back into position. Sustaining possession as Cassetti hands it over well into the center of the pitch. Possibly fouled, but he's playing like the village idiot.

20' Looking much more composed in pushing things through to the front, though tough passes and play from the fullbacks isn't really helping much.

18' Vuci counter....Menez clipped from behind in the act of shooting 1v1 and no penalty. Absolutely astonishing.

Let's just be honest about what that was: Jeremy got Mirko's sloppy seconds. A tap in, but a tap in outside the box with excellent accuracy.

14' Cassetti's begging for a first half tactical sub.

Basel possession. And Basel goes right after the rightback spot. For fuck's sake, he's seen Basel three times in the last year...stay in position, because they're coming after you. Space is bait.

11' SuperSergio. Stuffed Streller on the line on a pointblank shot. Astonishing.

10' The centerbacks are on their game, so that's something, at least, but the attack is, let's say disjointed.

Marco Cassetti gets called for obstruction in Europe, it appears. Damn.

8' Ugly passing and Basel's being afforded possession and Roma relegated to the counter. Which, with Mirko and Menez, isn't so bad.

Double world class technique on the tackle by DDR and Juan.

Really, really nice to have him back in the frame.

1' First off, and most importantly, these kits are absolutely hideous. It's very difficult to fuck up white-on-white, but Kappa's managed to achieve the near impossible.

If they lose again, look no further for reasons.

Players on the pitch, Alex Frei still with the bone structure of a four year old.

The stream below is working, and according to the opening introduction this Champions League game in Basel is not a mere football game, but the final battle of good and evil for all of humanity. Good glory was that unnecessary.

Important note for those who didn't change the clocks this past weekend: the game is an hour later. 2045 in central Europe, but 1545EST, using that as a reference. Better an hour early, though, than an hour late. (They'll go and peak in pregame now, just watch.)

Just tuned into this'un from the comments and it seems to be promising, if only because they just showed a Roma-Basel montage. But it was set to the Requiem for a Dream soundtrack, which may or may not bode well. (On one hand it projects depression, but on the other it suggests this could be very real, and we all know real Roma is the good Roma. Answers forthcoming.)

Roma News nailed it, personnel wise, anyway, save for Cicinho x 2. And UEFA has it as a 4-4-2, but I don't know how accurate their tactical lineups are, nor do I know the strictness of their lineup card policy: Write down, in detail, the positioning of your players when the opposing striker drops into the hole, the winger cuts into the channel and the fullback pushes up along the touchline. With pictures.

Pray for no midfield injuries.

In other words: unchanged since Rome. I think.

RomaNews has Cicinho in the starting XI and on the bench, which I suppose means Claudio is so adamant about dynamic fullback play to match Basel's, he went and changed the course of scientific history. Either that or the first was a mistake and it's Cassetti in one of those spots. We'll hope for the former - really, who couldn't do with 'Cicinho overlaps Cicinho!' in their life? - but assume the latter.

Should the projected lineup hold true, and it has on RomaNews for a couple of days, it will be really, really interesting to see Simplicio replace David in a like-for-like positional swap, even if he won't play that way. I expect it to be a bit more 4-1-4-1 in the attack as Simplicio inevitably ventures forward with a fluid Perrotta chugging back and forth to fill the occasional space when required. Makes a good bit of sense, too, since Basel's damage was done largely (wholly?) on the wings. Why not keep the fullbacks pinned and push through some volume in the center of the park, challenging Basel to win and break through via the midfield game? I like this*.

* - As always, I reserve the right to retract this within 30 minutes of the final whistle. House rules.