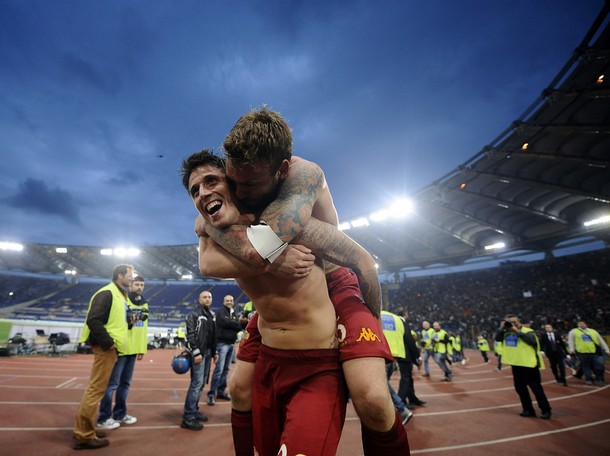 This one is particularly beautiful. The standings? Nay, they’ll send a postcard on the way by. For Francesco? Most of what they do is for Francesco in some manner; this was just a nice bonus. The bewildering whining after a 3-0 loss?

But it's more than that; something deeply rooted in the structure of this victory. Someone last year, I’m assuming it was Blogistuta, expounded on Lazio’s proud roots – those of the Greek variety. Their claim as somehow the true team of Rome, yet fashioning and proudly displaying a Greek identity. The blue and white, the eagle – now apparently suffering an identity crisis – and all that jazz; claiming Roman, waving a Greek flag, confusing all.

On Sunday, they were put to the sword by the unlikeliest yet most appropriate of men: Leandro Greco. The Greek. Not only did he take over for Roma’s most dynamic player, the man who for 30 minutes had me occasionally thinking ‘the future of Rome is unfolding before our very eyes’, but he did so without ceremony, almost as though concessionary. There was no reason to believe some preseason minutes in Paris and some astute positioning in Switzerland were going to aid in winning The War. No one drew this play up. No one would ever dare.

Last year we had Julio Sergio earning instant immortality in Roman lore with his derby heroics. This year it’s Leandro Greco, playing an integral part in taking out Lazio, doing so as a ‘Greek’ in Roman name. They can’t even take care of one Greek in Rome, which goes a long way in illustrating how they’ve carried the Greek identity with shame all these years.

So take some notes, Lotito. Leandro just ripped the tapestries from the walls, kicked over the furniture, pissed in the fountain and shot down your eagle.

A century of trying to build the overly niched identity as the finest Greek-tinged establishment of Roman name, and all it took him was fifty minutes to tear it down and declare it his.