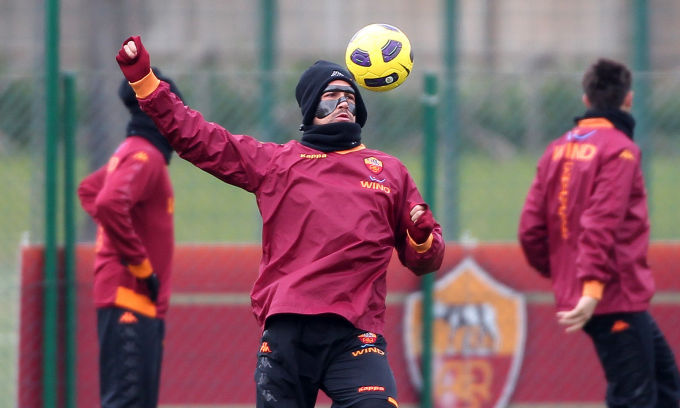 Let’s play a game. Let’s play Guess which Roma will show up?

i. We could take the most recent example of Bari. I’d rather not and won’t, because Roma often plays to the level of its opponent – they just seemingly took seven months off from this practice last year.

ii. There’s “Big Game Roma”, which seems to show up when the marquee lights are bright enough, and this would certainly fall under that scenario. However, this is Milan and without their great nemesis, Mirko Vucinic. I’d go in with the Primavera’s B- squad with Mirko somewhere in the vicinity of the left forward spot and still like the chances for a 1-0 victory. Without him, dreary clouds begin to form.

Or is Menez Milan’s new kryptonite? The last two treks to the San Siro he’s had his way with everyone not named Roberto Rosetti, and that’s out the window this year. Seems maybe he’s learned a thing or two from Mirko – here’s hoping the lessons concluded before Celebrations 101 - so perhaps he and Riise will be the new San Siro dynamic duo leading the Roman charge. If ever there was a more likely pair...

iii. Then there’s timid Roma, but that, to me, is saved for Torino (this once included Torino itself, strangely) and Bavaria when sucking on fumes and Nicolas Burdisso’s size tens. Seems like they love the San Siro plenty, but would rather the Milan teams not come to visit and muss up the carpets.

Is "San Siro Roma" also “Big Game Roma”? Might be. Are multiple yet converging personalities out of the question for Roma? Absolutely not.

iv. There’s “already checked out hey-valet-where’s-my-luggage Roma” that decided one half of football against Napoli was enough, and they’d just assume float around questionable websites on the internet rather than work to close on the Friday before the (very) long weekend.

The problem is I’m not sure they respected Napoli enough; I know they respect Milan enough, because a little birdie told me.

However, everything I see points to the Good Roma showing up – at least starting in the midfield and up. But will good Doni show up? Or how about the Cicinho that can occasionally defend*? And will Rusty David, soon to make its way to Urban Dictionary, make it a holy trifecta of shooting one’s self in the foot?

* - May or may not be a figment of my imagination.

This team is now a complete mystery. They are capable of thumping anyone and putting together an astonishing run of clinical football at both ends, yet just as capable of losing to a team made up of Digao, that other Seedorf and Pato's mentally disabled second cousin. Which makes it fun. And occasionally infuriating. And also impossible to peg anything at all. So sit tightly, wait til lineups are announced and adjust the prayers accordingly. It's the Roma way.

Of course, we know who’s showing up on the other side: Zlatan Ibrahimovic FC. Doesn’t matter who else is on the pitch, in what colors, under what name - he’s the almighty target in Serie A. What else can be said? He carries teams, and the proof’s in the table’s pudding.

So I guess this means if Inter bought titles with him, should Milan see out the year successfully, they’ll just be loaning it. Il Diavolo and all that nonsense…

What year is this? And where's Spalletti?