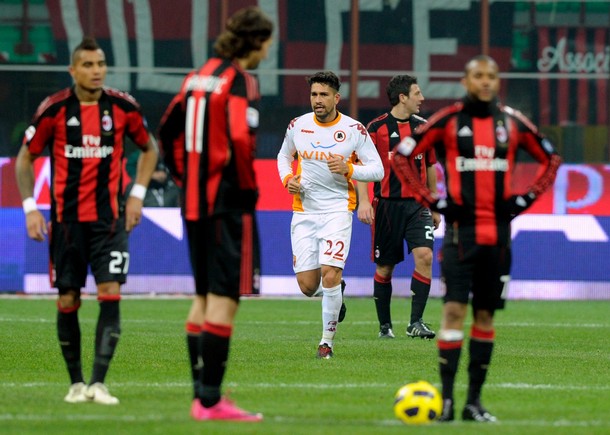 Definitively, we have an answer – or several: This was Bari Roma. And it was Big Game Roma. It was also San Siro Roma. But most importantly, this was Ranieri Roma.

This year has been very difficult to peg on its inconsistencies and inability to state not just an intention, but an identity. The last two weeks have been the closest to finding last year that I can recall. The Bari game probably didn’t thrill most, but how many people care about the performance and how they won against Siena last year? Or Atalanta? The result above all else, and that’s what they did: watertight in the back, solid in the midfield and believe that at least one moment of individual brilliance from the front can turn in the three points. It was Ranieri’s credo when he rode back home, and it was the system, if you will, which brought so much success last year. This was much of the same, with better execution, better overall play and on a much grander stage.

That individual moment was not from Borriello, but from the man who’s quickly becoming the Milan killer in-residence: Menez. The burst on the right is the type of split-second momentum shifting play which allows a back footed clearance to be hoofed into the path of an on-rushing attacker. A little less space, and the ball’s cleared before Abate gets a whiff. The acres between he and Antonioni was the first and, obviously, most important domino, as it allowed the ball to sneak into gap, and ultimately wind up in the net. The boy’s talents are just so, so special, and finally, so decisive.

But he’s not what allowed them to win that game. When ownership is turned over in February or so, two checks need to be written: one to the order of Unicredit, another to Philippe Mexes. One should read €150m or thereabouts, the other blank, with a polite request for a reasonable cap. I’m not entirely sure which check should go to whom.

Something happened last year, and Roma was very fortunate to reap the benefits of convenient timing: Philou crashed and burned, while Nico waltzed through a career year. This year, the universe has run a self-correction – Crockett & Tubbs, business as usual.

Not champagne football, but winning football – Ranieri football. The only gripe I have is that this game falls before the longest break of the year - they could really do with this three weeks in a row.