Sitting Down On The Job

Share All sharing options for: Sitting Down On The Job 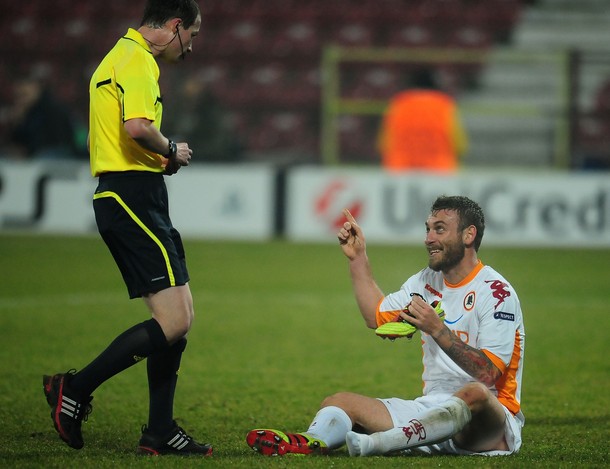 Analyzing this game is an exercise in the imposs….

Oh, I’m sorry, did I just quit my sentence halfway through?

The game itself was standard Roma away fare: play solid, no frills, controlling football in the first half, hope to obtain the lead, and then rely on the defense in the back end. Which worked like a charm last year; this year, not so much.

But, of course, this wasn’t a “midfield took a breather” or “isolated the attack” type of meltdown. As soon as qualification for the knockouts was assured, they did more ball watching than Cristiano Ronaldo in the Real locker room. The defense went from moving with the play, moving with the man, moving with anything, to simply, uh, standing there and watching – Philou may have been trialing 3D glasses. Almost like their explicit directions at halftime were to “not get injured”. Cluj players who were entire non-factors in the first half were suddenly going unchallenged, unwatched.

Which isn’t the end of the world. Not ideal, of course, but with three games in eight days, two of them away, and the opening leg of which was boot camp training, taking a breather with absolutely nothing on the line isn’t terrible. Think of it like a free Europa League game, which we know Italian teams love to punt anyway (Roma not innocent in this either, obviously*).

• - How much turnover did Panathinaikos have this summer? They’ve been @#$%ing terrible in the CL. Having watched three - THREE (I have a thing for FCK, don’t ask) - of their non-Barca games, I can firmly say they’re a Europa League quality team at best. The theory that Roma’s drifting back to the days where they “don’t do small teams” might have some merit. (Well hello there, Bari.) Or maybe it was a simple case of “styles make fights”.

What I saw, what we saw, in the first half was by no means stellar, but it was commanding. And then they stopped playing. It’s not as though they let the foot off the pedal, it’s that they took the keys out of the ignition, pulled down the hat and took a nap in the parking lot. The drop was that precipitous.

I would, however, like to know what happened during the half, since Claudio lost his voice and all. I doubt, once he finally comes out that he’ll declare the second half performance anything but sloppy, even for a breather. We can only assume he’s an amateur charadesman and they took his tactically-designed wild hand gesticulations to mean “do nothing, stand around, reserve oxygen like it’s Apollo 13”.

So that’s Cluj. I’m not sure there was anyone brilliant, and there were certainly a few with games they’d like to forget. A thrashing to get back on track would’ve been nice and, I think, possible with a little bit of tactical flux. Mirroring the Udinese game, a nice winged 4-3-3 after the half with Vuci and Menez might’ve plucked the game from the center of the park and opened up Borriello and a marauding Simplicio for a baker’s dozen between them. But then I had my liveblogging goggles on, and they’re unsurprisingly rose-tinted. Actually, let’s check that.

I think ESPN has a new stat thing which tells the focus of play…it’s telling me the game is still, 10 hours later, in the 35th minute. Is this a cheeky dig at Roma’s decision to spiritually exit proceedings? Damnit I hope so.

Nevermind, it was Corriere.

So in other words: yes, had they forced the defense to stretch a bit, life might’ve been a little bit easier. Not that it was ever anything but easy.

There was a lot which could’ve been amended, but we saw it with the subs of taking off Menez and Cassetti, the only two players sitting on yellows: once the dust was settled, eyes were firmly darting beyond the Transylvanian hills and towards more pertinent objectives, like getting back on track in Serie A, and I’m cool with that. When juggling multiple objectives when a step behind, you can’t really stop to worry if one of the balls is less polished than the others. (Cristiano-centric today - apologies.)

If we’re in a day and age where people are worrying about two personalities like Totti and Burdisso clashing, I don’t know what to tell ya - they’re not exactly school teachers. I’d say so long as no one dies – and don’t rule that out - everything’s unicorns and cupcakes.

In that order, quite obviously.

i. I think, once they settle back down (and they will), Roma can finally match this edition of ManU, which was simply not the case in the past.

And fuck, I’d love that. Toss them ahead of Shakhtar even, but not if Riise is going to wear long sleeves.

ii. Does anyone really think Carletto’s not going to get Chelsea clicking again by mid-February? The draw happens on current form, but the games do not. They’re going to hate-beat some teams after this little run, and they can do it to anyone in the world not named Barcelona.

iii. I realize that certain important things are unsettled and I’m probably the absolute last person to push for something like this, but poking around for a rightback in the window or giving Rosi a real chance to prove himself might be a necessity should certain draws come about (ie Real, Tottenham). I don’t normally advocate situational shopping, but Cassetti’s not getting any younger and Rosi’s looking more wingback-slash-red-card-waiting-to-happen than fullback. Ideally someone like the Marco Motta before he unremembered how to defend and/or play football (still kills me, it does).

Anyway, after a difficult ten days of Roma, it was pretty nice to sit through a second half and hope that Claudio would toss on Vito Scala for a run. This team rarely, if ever, has anything easy, so I can’t possibly begrudge them this one.