Athens: The Comforts Of Home.

Share All sharing options for: Athens: The Comforts Of Home. 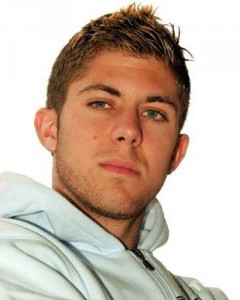 You can only laugh. Panathinaikos to end the unbeaten streak?

Perhaps another Cagliari-esque wake up call was in order. Also on order is some serious set-piece training. (And Lobont just vaulted to second keeper.)

92' Menez wins a free kick on the flank for Pizarro to bomb into the box - cleared.

Doni forced into a save (which he finally makes).

That's the second header Burdisso has missed today. Isn't that supposed to be his game?

Cerci with his inevitable yellow.

88' Motta with a half decent interception as Panathinaikos continue working it around for a third headed goal. The wheels have come off.

Hasn't been decisive, but some of the decisions this ref has made have been diabolical.

85' Ranieri is going to have a goddamn field day with set piece defense the next few days.

You must be joking. 2-2 on another corner scored by another sub right away. This one's all Roma as they simply failed to clear the box.

That was a near carbon copy penalty of the one on Pastore this past weekend, only this one was in the box.

82' Riise up in the box and he runs out of ideas before running out of possession.

I don't need to say it but a 2-1 away win would be massive, as Doni eats it while trying to clear the ball. Well done, Alex.

Cerci penalty! Brilliant run by the kid and he was double hacked. Not a question in the world about that one.

As I'm sure many have noticed, the minutes have disappeared from my stream. Nary a clue what time it is. (77th or thereabouts the interwebs say.)

And there's Menez dribbling down, cutting in and taking his shot. That's his game. (Saved, but it's the right idea.)

And here's Cerci's Europa League cameo. On for Rodrigo, who's seemed a walking red card since, oh, the opening whistle.

This is definitely not the ideal final third lineup. Menez is trying to drop the ball off and get it back further forward, but that's not his game. He's better off running past, dribbling past, or getting the ball from someone further up the pitch and working magic going forward.

And now with Vucinic out, everyone's starting in deep midfield.

Obviously it's been awhile, but when was the last time Roma conceded off a corner? I can't for the life of me remember.

Mirko desperately trying to squeeze a pass, any pass, into a steaming teammate but he's mere inches off every time.

Simao simply outjumped Burdisso with a running start and The Bald Guy was there for a tap-in. Which is expected when you put David Pizarro on the post to clear out the high balls.

Everything you want, really, by giving Panathinaikos possession:

- Close down the middle and force them to play the wings.
- Force them to bring bodies forward.
- Clear everything in sight in the box.
- And this opens up the counter for Roma, their most dangerous weapon today - and one of the things Baptista's been doing well lately.

63' Roma decidedly stronger in the back this half and everything is being headed out like a recreation of The Masterpiece In Firenze.

Baptista one man break and here comes Riise yet again...headed out just in time. You get to the front of your seat like a good thriller whenever that left peg looks it's going to cock back.

David lofts it for an easy catch. It's tough to get corners right when you've gone cold for an hour.

60' Corner Roma, which is genuinely the first I can remember. Probably because it is the first.

Yellow for Simao after the Roma counter collapses and restarts again.

56' Now Panathinaikos with some sustained possession, which I was going to say might be a better defensive gameplan for Roma, but Karagounis wins a free kick dead on from 25. The percentages that this winds in the net aren't that low...

...well, they are when Leto takes the free kick.

55' Pana somehow manage to dribble the ball through 8.5 red shirts into space on the left. I blame Doni.

54' Roma trying to slow the play a bit, which makes sense given how uneasy they've looked on the counter. And that JSB is currently off on a massage table getting a steamy Greek upper thigh rubdown.

52' Mirko, who's loving that right wing, cuts in to the left and shoots straight. He's not Messi, however, and it only lands in some Greek thigh.

Thanks to Spencer for a stream which actually includes numbers.

47' Mirko goes in from a tight angle on the right, the crosshot is pushed away by Tzorvas.

Not so good sign: Doni stumbles onto the pitch, which means JSB's injury was not a bad dream.

No substitutes, which is a good sign as it means no on tripped and fell down the stairs during the half, but I think we'll see a Cerci Europa League cameo before long.

Back in the stadium and onto the pitch.

i. JSB going off injured could be colossal.
ii. They've gifted far too much space in the counter - for the second game in a row - and Pana have nearly made them pay. Time to bring back the vaunted Ranieri lock and key.

47' Cheeky free kick left to Mirko at the top of the box which he then trickles harmlessly towards the Pana goal. You win some with him, you lose some.

46' Riise runs all the way down with no support. The faults of no To-To.

45' These are the reasons why Ranieri often preferred Cassetti - experience makes the right call in that instance.

Motta with a tremendous mistake that gifts Panathinaikos the attack. Leto eventually crosses it to Cisse who puts the sitter just wide. Marco went for the interception when he should've played the man. Could've been costly.

Cross just behind Matteo & Mirko who were in front of goal.

42' This ref is absolutely abysmal. Calling everything in Pana's favor - missed an easy foul and gifted Panathinaikos possession. Rough week for UEFA.

41' I actually wondered to myself pregame just who is the third keeper on this team - it may very well be Daniele.

Now I'm a bit worried we may find out.

Ladies & gents, The Alexander Doni Show. And suddenly I'm not quite upset about the quality of the stream.

JSB off. Somewhat catastrophic, depending on the severity of the injury.

Cariologist alert: Julio Sergio went down under no challenge grabbing his groin. Physios are on and I'm going to need one to tend to me on the couch once they're done.

36' No surprise, but there is not a soul playing anything close to striker at the moment. Mirko's on the left and Baptista is dropping so far back he's providing a binky for Pizarro.

35' Sebastian Leto cuts in a cross to a thankful Burdisso.

Leto has traveled the friendly path from Olympiakos to Panathinaikos. I've always wondered just how players get away with this stuff.

33' Second shot of Brighi in mere seconds. Welcome to the game.

Just got my first shot of Brighi, which is more the stream's fault than Matteo's, but still.

And Taddei immediately wins a yellow. Given how the calls have gone thus far, a Roman is destined to be sent off.

I never thought for a second the players would be intimidated, but I failed to factor in this ref.

What a simple swerve into the far corner. Pana's keeper had nary a prayer. Quality in bunches, ladies and gents.

As good as Ranieri's been, as much as Totti means to the side, no one, and I mean no one, deserves credit for Roma's rise up the table than Julio Sergio.

27' JSB forces into another heroic save by Ninis. An absolutely phenomenal save on a ball destined from the top corner.

I'm not even sure Pana care to get into the box today. How about sticking a DM on those shots, eh?

26' Another Roman attack with unnamed faces as Cisse breaks the line and forces JSB to come out of the box and clear it back to Rome.

A fairly open affair. I think. I also recently thought Cisee was Juan, so what the hell do I know.

24' Someone has the ball, maybe DDR, maybe Brighi, who then passes to Pizarro, who passes to someone else, who cuts it to Motta, who cannot buy a foul from this referee.

Who then gives yellow to Pizarro for tackling like, well, Pizarro.

21' Leto goes for a shot from "what the hell are you thinking?" range; goal kick.

20' Free kick from the wing...sails over everybody.

Still disastrous streaming, although the Veetle is finally up and working. We hope.

Motta gets all ball, is cleaned out by Karagounis late, and Motta is called for the foul. What a ridiculous absurd decision.

16' Very cautious play by Roma. At least I think that was Roma.

Riise off the post! You must be kidding me. With his finishing skills and absurd run of form, how did that not go in? And how the hell did Panathinaikos decide leaving his left peg open was in their best interests?

13' I mistook Baptista for Taddei. You know we're entering uneasy waters when that's the case.

11' Hottest team in all the lands right now and they can't be arsed to provide a half-decent stream. What's wrong with this picture?

10' Working on a screen the size of a lephrechaun's dinner plate, but it'll have to do.

You must be joking. Finally find a stream and it's switched to Benfica.

Alright, we are in business.

Found one listed under Twente v Werder on atdhe.

3' Apparently no one cares to watch this game, as I'm still searching for a simply watchable stream.

1' Genuinely cannot see anything but I've heard Julio Sergio already made a miraculous save. Once again.

Watching a very dodgy pregame stream on Veetle at the moment, hopefully will find something adequate shortly.

Perrotta, according to uefa, is no longer on the bench. Presumably his back isn't all that wonderful.

Panathinaikos in a nutshell (my limited nutshell):

i. Djibril Cisse is fast and has ridiculous hair.
ii. Sotoris Ninis is some sort of world class wunderkid.
iii. Karagounis has wicked range. And Katsouranis is nothing to scoff at, so the defensive midfield should be more than decent.
iv. This "4-1-2-2-1" sounds an awful lot closer to a slightly staggered 4-3-3.
v. Shamrocks, well, rock.
vi. That last one should round this off nicely.

RomaNews has announced it as official, which is as official as official gets. Wonderful to see Max on the bench finally as well. A nice twelve goal cushion would be lovely to give him a nice run in the final half hour, so let's make that happen.

There's some business which crept to the forefront yesterday and must be dealt with:

"Yes, I talked with them, but right now I'm thinking only of Flamengo and the World Cup. But after that, I'll return to Italy. Of course, Rome is a great city and a great team, I'd like to play with (Francesco) Totti," said Adriano.

There is no possible scenario in which this an acceptable signing. Not for a scudetto, not for a Champions League and not to save the club from the goddamn drop. I'd rather watch Roma derby it up with Cisco in C2 than watch this waste of space spill mustard on the red & yellow whilst eating his mid-half hot dog - this on the days he decides to grace calcio with his presence. I'm of the opinion that anyone who protests/riots/causes upheavals at sporting facilities should be hauled off and removed from the gene pool post-haste - for fuck's sake it's a sport, get some perspective - but for this they should storm the compound.