Share All sharing options for: Haute Cuisine: A Tuscan Gumbo. 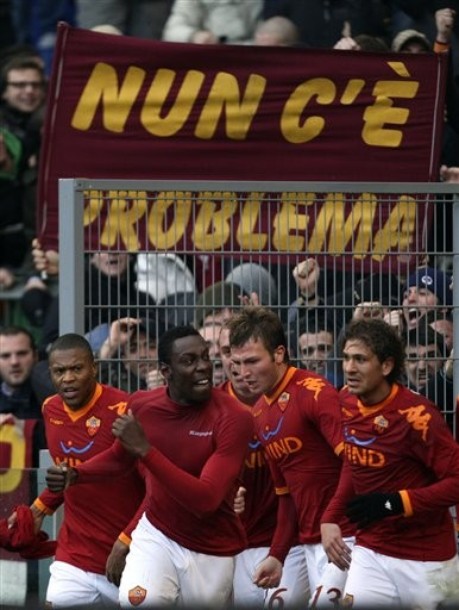 Like many, my streaming was deplorable. It was such that I couldn't tell if that was Simone Perrotta running around the pitch or fellow Englishman Margaret Thatcher. I did, however, pick up a few things:

That's all I have - tough to get good coverage of friendlies. (That's obviously a joke, but they were hardly running at 100%. Big week/end coming up.)

Now, for the important stuff:

As promised, the pack has dwindled and will continue to do so. If things stay status quo, it will shortly be time to look up, rather than back.

My, how one turn of the Serie A table can change things.

Get Out Of My House

Okaka: Stefano was rewarded for his heroics with a six month loan to Fulham for a minor fee (175k) with matters being reviewed in the summer for perhaps another twelve months.

He's perhaps the most talented youngster on the books, but the boy needs to play. Let's hope Fulham's drunken persistence means they have big plans for him in their first team.

Would somebody get this guy a goddamn free transfer already?

After such brilliance, why take our Pit away? Why?