Share All sharing options for: Boldly Going Where Plenty Of People Have Gone Before (And Far More Successfully) 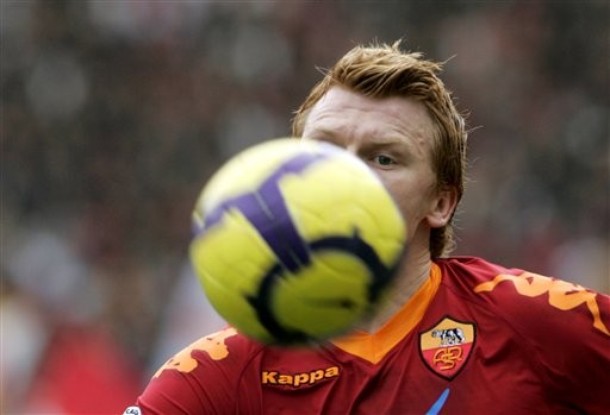 A bit bored, so this is undoubtedly my boldest undertaking yet: two games, two wins, two Sicilians, one tapedelayedblog.

Both games playing simultaneously - the chocolate wafer to the vanilla cream of my browser - thanks to ESPN360 along with an as yet to be determined soundtrack. God bless the 16:9 ratio.

1' Those who've been here before will know you won't learn anything from this here tapedelayed blog you wouldn't from watching the game with your deaf grandpa, a spastic Jack Russel and a half ounce of Vancouver's finest, but there's no reason not to, really.

I see Catania has earned one of their forty-seven early corners.

2' Catania's scarf is easily Serie A's most unfortunate fashion statement. It's so Hello Kitty you have to wonder the breadth of Takayuki Morimoto's influence.

And just when Catania will buy up Yoann Gourcuff (full with faux Argentine-Italian passport with a suspiciously scratched out ...ecoba).

3' I get the feeling a diet would do Fabio Simplicio a world of good. He and David are destined for a late-60's girth-off.

5' I've got both screens on top of one another and Motta in Palermo just skied a brilliant ball which I swear just about hit Cerci in the Catania game up top.

If that isn't a metaphor for his season I don't know what is.

6' John Arne Riise just tackled Taddei: not only does he score like a striker - he tackles like one too.

7' And on that subject, Liverpool calls offering to swap back Aquilani for Riise:

Who's taking it right now? Not I.

(Alright, I would, but I'm keeping John's form.)

8' Rodrigo in on Sicilian goal early!

9' Maxi Lopez is a tanning bed nap away from being a South African track athlete.

10' I don't get the Liverani thing. I don't now, never have and never will. How on earth does Lazyo happen?

That's like purposefully dropping the soap in prison and proclaiming yourself heterosexual: you're just not fooling anybody.

12' I've proclaimed Mirko as the best in calcio at keeping the ball from going out over the goal line: twice in the last two weeks he's made me look the fool. I blame his newfound tribal heritage.

14' How quickly can I get this in here? (No pause button today.) There's an initiative trying to create a supporters ownership group for Roma. You can read more on it here.

Personally, I think giving people like me the chance at a majority ownership stake is a terrible idea - you don't even know the type of basic decisions I blow on a regular basis. (I blow the boxers/briefs conundrum daily.) Transfer market? Game over.

15' Claudio needs a course from the Pep Guardiola School of Managerial Hand Gestures.

Nil-nil in both games. But you knew that already.

16' Mirko Tomba at his finest against Palermo right now.

I think he'd finish Top-20 in the Super G. So long as it was on a tough hill. And they moved the start slightly left.

Well, that game's over.

Claudio is positively unmoved - that Pana game must've zapped more out of him than he ever let on. Rosella commences biting fingernails, also seemingly suffering lingering effects from Roma's...wait for it....wait for iiiiiiiiiiiiiit....Greek tragedy.

This is giving me all sorts of mathematical fits.

20' Going on 110 minutes of Roma v Catania in total and I've still yet to consciously view Cassetti's ode to 3rd grade school pictures.

21' While we're banging the Liverpool as transfer buddies drum: Julio Baptista to the Mersey for €15m in June. You heard it here first.

22' Despite the clean sheet against Siciali II, Roma's set piece defending was woeful. It's just that Catania finishes like, well, Catania.

"Before, Maxi would do me in the bath, the living room, the kitchen. Now we have to wait for the child to sleep. But life is about sacrifice, so I do not complain."

25' My cache empties on Wednesdays, so I'm rather stunned Roma hasn't scored against Sicilia I yet.

26' Simplicio gets his Roma career started early with a cheeky little flick of a pass to Daniele De Rossi.

Come get that cheddar, Fabio.

Catania feed shows a glimpse of The Totti Box. One row above Francesco is sitting a doppelganger of Slash from Guns'N'Roses fame, only this one looks like he sits outside of local liquor stores waiting to buy high school kids booze at a premium markup. So Slash, but skeevier. Good circle.

29' Kjaer's hair is the new presence of all color.

30' And Miccoli's armband is the presence of rainbows and parades, apparently.

32' When looking back on the career of Claudio Ranieri in Rome, my favorite moments will undoubtedly be the glimpses cameras offer us of the gaffer statuesque, hands behind his back like a schoolboy with eyes furiously darting laterally with the play. It's a Wes Craven movie waiting to happen.

Rodrigo Taddei celebrates in Catania with a poke in the eye. He, ladies and gentleman, is the new Menez. Or old Menez. This one is legit, but most of it is just unnecessary.

34' Both streams go close on Rodrigo's face at precisely the same moment as I suddenly lose the ability to have children.

35' ESPN proves me terribly wrong: Cassetti side part in all its glory.

And on the subject of Roman rightbacking coiffures, I'm fearful that Motta will one day grow a mullet when they're supposedly fashionable, but they're really not.

Because mullets, Canadian tuxedos and Jose Mourinho's 'tactical nous' are things which will never, ever be in style.

39' There's a sideboard with the display TIM x 2, which worryingly forecasts a second Coppa Italia.

40' Were Cavani to actually be worth €30m or so, there was a goal he easily could've pounced on.

41' Speaking of goals gone begging, I genuinely haven't a clue how Daniele managed to casually sidefoot the ball into Andujar's hands. The man scored with his left against Catania not a month ago.

This further confirms my theory that Ranieri zaps the entire squad with Men In Black mind eraser thingies (official name) after every single game.

43' Tagliavento gave Totti a yellow for yapping. I approve of this decision, along with every decision he's made in the last two weeks, including the bold decision to go boxers over briefs - as reported by Gazzetta - in Samp v Inter, giving him the confidence and breathability to shut Eto'o'o'o'o up.

Also, Sampdoria are kindly looking for a testicle donor. Either two for Del Neri or an entire set, should you be able to find them on eBay or the local pound dumpster.

47' The Catania stream froze in such a fashion that it blurred a sprinting Cerci's feet into a pinwheel of brilliant yellow.

You could never recreate that in a million years organically, and was it ever magnificent.

51' Doni's one Sicilian save: offside.

I suspect his years of suspect decision making have infuriated the gods into cruelly conspiring this year.

52' The soundtrack has morphed into a Lupe Fiasco discography, by the by. I haven't the slightest idea the bearing this has on my viewing, but I suspect it makes this liveblog poetic, intelligent, full of broken promises and incessantly delayed.

54' Miccoli yellow for his ridiculous armband.

Meanwhile, in the Catania game up top I see a 90minute extension of the Coppa Italia Round Of I Haven't A @#$5ing Clue. There's 'declaring your superiority' and then there's 'playing Catania at home'.

56' Rodrigo has matched his beautiful facade with a lunchlady's haircut.

I wholeheartedly approve. I also nominate AS Roma for having the most ridiculous hair in calcio.

This is not a good thing. 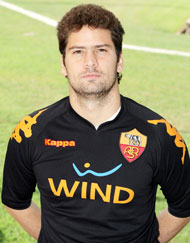 Yes, that was on my hard drive. No, you may not ask.

Meanwhile Maxi Lopez is being shut down in the kitchen, the bath, and the Olimpico penalty box.

63' And as rumors persisted during January, what are the chances that Lazio were genuinely after Burdisso's younger bro? Or was this a petty Hail Mary designed to grab some nonexistent mental edge over a team twelve classes above?

I vote the latter.

64' Kjaer's hair is the new absence of goal scoring ability.

65' Menez on for Mirkogol, which gives us a glimpse of Cassetti in a turban on the bench.

A style maven is born.

67' There was another point of newsy importance which I meant to throw in here but am now entirely unable to remember, so I'll make something up:

An odd combination to be sure, but with Rodrigo on paternity leave, Alessio may get some more than the odd cameo against bottom of the barrel opposition.

70' Your once-a-game Mirko injury which looks more serious than it really is but will zap enough of his strength to cause a 75th(ish) minute substitution. (Catania)

72' And your once-a-game Menez tackle which would end someone's career were he to have the muscle strength of a birch sapling. (Palermo)

73' A bold attempt on net by Julio Baptista lands 20 yards out for a throw.

It's finishing like this that makes me think Sevilla never happened and I've been the subject of a vast global conspiracy. But I swear I saw it.....

Have we seen him in a non-Coppa extended spell since The Great Inter Boot Debacle? I dare say not. Ranieri, for coming off as such a nice guy, is surely ruthless.

77' Yet another double shot of Taddei - this one detailing the evolution of his lunchlady look from Palermo to Catania. The possibilities for Milan are downright chilling.

It's times like this you miss the strikingly aesthetic minimalism of Luciano Spalletti.

78' This is the part where I say I could hardly careless about the Europa League, as you can tell by this utterly ridiculous 78-minute sequence as I should be up losing sleep over the body temperature of Francesco, the mental state of Doni and the hopes that someone breaks into Burdisso's house tomorrow night just to make sure Philippe gets back into the XI.

It doesn't matter to me and as we all know, it's all. about. me.

81' Mirko off, meaning this liveblog is now entirely devoid of some Vucinic. Tragedy. (Somewhere between Mexes' hair and Haiti.)

You know things are going well when your leftback scores a goal and casually runs to the sideline as though nothing happened Barry Sanders-style.

Grandpa needs a Tweetbook to get with the times.

86' Rodrigo now with his probably shoulda been a goal if his name wasn't Rodrigo Taddei non-goal.

87' Faty on the run....Faty on the run...Faty fall down. Normally I would theorize Leandro Greco was oiling Ricardo's studs pregame to hopefully work himself into viability, but now that he's Buddha knows where, I just think Faty needs Baptista's personal trainer.

88' Kudos to Palermo for playing a full ninety, but Daniele just threaded a ball through two pink(ish) shirts just outside the box to Julio Sergio.

Pek raising his arms in celebration whilst up top we're going into the highlight of Julio Baptista's Roma career: the best time wasting your eyes will ever see.

Which then turns into Simone instigating an unnecessary scrum with Maxi Lopez's girlish haircut. And we then get a glimpse of future Roman legend, Takayuki Morimoto.

That actually was a vicious hip thrown by Maxi Lopez. Clearly he hasn't been throwing enough hip at...well...

And that, ladies and gentlemen, concludes 90 minutes of Sicilian excellence.

Until the real thing on Thursday...