Panathinaikos: We'll Call This A 'Do-Over'.

Share All sharing options for: Panathinaikos: We'll Call This A 'Do-Over'. 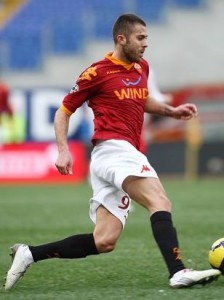 Ah well, I think the Europa League has always served as a bit more of a distraction from the 'title race' murmurs of recent times, but they played like it was merely a distraction. So now it's all Italy, all the time. First securing Champions League, and then...we'll see.

Mexes yellow for a poor performance.

Baptista foul for a kick in the face. Hey, if you aren't going to win, send 'em home tattered.

Katsouranis off, which has been coming since his first yellow.

Cisse is the new Pippo, apparently.

87' Back to proceedings, but it's a bit of walking through and waiting for the whistle. Or Napoli.

A convenient Panathinaikos cramp as the Greek time--wasting subs commence. This game seems about buried now.

Cassetti cleaned out, ball to Taddei, who whips in a lovely ball to three red shirts, all of whom miss.

82' 3 goals in ten minutes and no Turks on the side. Cisse yellow.

80' Menez adds to his highlight reel; can't connect the cross.

This is looking awfully hindsight-ish and after-the-fact, but I never liked this lineup.

79' Corner won off a free kick...another ball cleared from the goal mouth. You must be joking.

78' I'd be waiting for the desperation heave of Pit/Espo were Ranieri to have such poisoned arrows in his quiver.

77' Roma get a do over after a poorly struck DDR shot. Tzorvas with another tremendous save, but Daniele had been called for the foul.

You know, they should win this game regardless, but they're arguably missing four of the six or seven best players on this squad right now - depending on whether Toni recreates his early form.

73' Mirko so nearly in on net as the throw ins are coming fast and furious; Pana doing everything to clear balls away.

72' Lazy pass by Simone and they're lucky to have won a handball free kick back as Cisse is doing everything to break.

Corner won from a free kick for Roma.

71' Ninis off. Brilliant goal; brilliant slip for the penalty. Gilberto Silva on.

Baptista so nearly beats the cross for a sitter into net - tremendous effort at the least. He may suck often, but his dedication has never been up for question.

70' Mirko called for a nonexistent foul in the box right down the other end.

66' Well, 'must score' became 'did score'. Perhaps this is enough to inject some life...with a brilliant Bapti-pirouette.

Riise wins a corner, which is well into 'must score' territory. Saved off the line again. Tzorvas for next year;s backup.

Daniele gets one back. Down to three.

65' I'm under the impression Doni still hasn't made a save. I believe I'm correct.

64' It's times like these I think of Daniele's comment that Roma fans are 'fickle'. I wonder how many will storm the compound tomorrow?

Nice little shot of To-To in the bench. Ah, hope...there you are again.

62' Cerci wins a free kick near the wing, and Alessio to whip it into the box as he whips it out of play. Well done.

61' And Daniele heaves a prayer for a goal kick. About time for another substitution.

5 minutes, three chances on net, none in the last ten. This is not how you score four.

Taddei playing regista. This can only go well.

57' Cerci owned off the ball. Alessio has the mentality for this game; Menez the skills. I'm sure this keeps Ranieri up nights.

56' You know who would've helped this game? Okaka.

55' Referee just referred to as 'elegantly coiffured'. I immediately concede that penalty was the right call. Even though it wasn't.

53' Daniele gifts the Pana attack as Taddei is called for lipsticks and handbags on Ninis. (yellow for Rodro)

52' Baptista called for a hip check. I also applaud the 'use Julio as a battering ram and bloody them into submission' approach.

51' This is very simple: attack, attack, attack. Do not create chances, just get to the fucking net. And it's at least happening as Tzorvas has been forced into his third save of the last three minutes.

Or is that Taddei playing rightback? I haven't any cliue what's going on. Cerci saved off the line. Wonderful reflexes, you pansy.

Oh, Baptista on. Missed that - Taddei, it seems?

Cisse a whisker from four. Mexes got caught in limbo yet again as Doni let's a cross casually coast through the box.

Riise looks positively befuddled. Still. I don't know if this is a good thing.

And no subs, which I also like: 'your mess, you fuckin' clean it up'.

And while hope is, as has been said before, the most lethal of four-letter words.........

Roma has scored 7 twice in this Europa League campaign. Neither were Panathinaikos, but it has been done.

Here's what needs to happen:

Baptista on, Cerci off. I don't care if Julio sucks balls most games, he's the only person on the bench who's shown - albeit only a few times - he can throw this team on his back. That and Cerci is nothing more than a supersub. I'm not sure he's put in a decent shift from the off in his Roman career.

Pull Doni, put in Menez and play without a keeper.

And sub Mexes for Bruno Conti, then go ransack his house in punishment.

I think someone said way back in the early Coppa round - perhaps Catania - that Roma plays Ranieri football in the league and Spalletti football in the cups. This is perhaps the most accurate assessment of what's going on right now. Except it's not really pretty, and they're not creating a bunch of chances, and they're only going through the 'blackout'.

I would not want to be in the Roman locker room right now.

They'll need 4 goals in the second half.

(I think right about now would be a good time for all to adopt my 'I don't give a flying fuck about the Europa League' stance.)

Juan was playing the offside, Mexes was not. That's how you gift 1v1 breakaways.

Cissegol. The wheels are off. The defense quit, and this tie is over.

45' Doni's confidence must be to the point that Ranieri can never run him out again. Ever. It genuinely is not all his fault, or much of his fault, but the last 5 decent shots he's faced have all gone in.

Unreal: Ninis again. Doni beat from distance. This is getting quite bad.

I do suppose the timing of it wasn't bad: this gives Ranieri a chance to settle things down during the half and rework some tactical plans.

41' Is that UEFA getting back at Chelsea's noncall yesterday? Perhaps. (Not that it won't stop Abate's conspiracy theories fuming.)

Cissegol. Back on the attack.

Wow, he didn't touch him. And it was a delayed call at that. It was genuinely just a slip - to be fair it looked bad, but only on replay was it shown there was no contact. Rough weeks for UEFA, eh?

Yellow card Panathinaikos for being a general pain in the arse.

34' Another Pana corner as Juan is grabbing his upper thigh area, making me grab my chest.

32' Must say, the balls being lofted into the box from deep - often Cassetti or the midfield - are positively spot on today.

31' A little bit of calcio tennis being played culminates in 3 points through the uprights for Daniele De Rossi. Multisport athletes, the lot of 'em.

Corner Panathinaikos successfully dodged. Doni - knocking profusely on wood - hasn't seen a shot on net yet. I'm not even sure he's seen a true shot on net in the last two hours.

29' Cisse is making a living on that last shoulder today - with his pace, once is all it'll take. They'll need to be perfect.

27' Daniele cleaned from behind with Katsouranis earning an easy yellow. And I was just about to say with this much lacking technique, particularly in midfield, I'm feeling a bit Prem-ish today.

26' Riise cleans out the winger yet again - he's been lights out thus far.

25' Roma's rapidly running out of freeze spray as Taddei is now down.

Corner Panathinaikos and the ball, though cleared for the net, is put back in and skipped not inches wide of the net. Simple solutions: concede no more corners.

23' Taddei whips it wide of net - that one looked decent but let's keep those to a minimum.

22' Roma and Panathinaikos should have meet annually just to have the ultras yell at each other. This is wonderful.

21' This is very much, though still 'superior' to Panathinaikos, a technically lacking side right now. Sustaining quality possession is fairly difficult, though stifling attacks hasn't been as much of a problem, keeping it commanded by Roma.

19' Lovely interception by Juan as Rodrigo's, ahem, 'muscled' off the ball. (Or pushed ever so slightly.)

18' We're back into proceedings with Daniele's man problem solved - at least for the moment.

Bruno now following him down into the tunnel. And now Daniele back out. I'd like not to know what just happened, please.

There's the ultimate highlight clip of recent Roman history: Daniele, rolling in agony on the ground gripping his man marbles, has his shorts pulled to the side and a can of freeze spray emptied into his, ahem, groin. Now he's run off the pitch and down into the locker.

14' Mirko offside; Daniele unable to have any more children.

13' Roma now knocking the ball about the back good and ready to waste the next 76+ minutes or so.

12' What's that, 4 in 6 or so? I feel like the world's about to come crashing to an end shortly. This is surely forecasting some sort of alternate reality transitioning into armageddon, yes?

It deflected, but you have got to be kidding me. He is an absolute machine! There is no stopping him right now.

10' Free kick won in Bapstista/Totti/Riise range. With only one of the three on the pitch, Pana defenders are quickly covering their man parts...Riise...GOOOOOOOOOOOOOOOOOOOOOL

9' Mirko cuts it across, keeper nabs it before it hits Perrotta. Between Simone & Brighi, I don't expect this game to stay scoreless long......as Mirko drills one from the edge of the box well saved. Right on the keeper, but hammered.

Cisse breaks once again, this time he's offside as Mexes pulls up brilliantly. Sans injury, that spot should be his - no knock on Burdisso, just, well, there's a gulf.

6' This genuinely does feel a bit like a European tie, which I suppose is as it should.

Cerci attempts to blow through the Panathinaikos; fails.

4' And the stadium, between Curva Sud and the away section, is positively raucous. I suspect this is what ancient times felt like, but with less disease hanging in the air.

3' Cisse breaks from Juan, who's still napping, and the loft was just inches from his boot.

2' Brighi's already run a half marathon. With Perrotta on the pitch as well, I suspect Roma just became the official team of Kenya.

1' Leto on the bench is a nice little boon for Roma. Being able to see through the smog and smoke on my screen would be a boon for me.

All are on the pitch, ready for ancient battle. Or something of the short. And now that I think about it, that shamrock is a ridiculously unfair good luck charm. Cheaters.

I may have lied about Sopcast, as the Italian lineup just came through including Costacurta, Baresi & Maldini.

Thanks to Richie for this little nugget - though I've yet to have a Vshare link not cut out randomly throughout a game. And SopCast channel 74348 is going strong at the moment.

I fear streaming is going to be mighty difficult today, just as it was for the opening leg. Apparently Roma in Europe isn't enough of a draw (but Roma v Triestina is).

I think I've figured out the Menez thing, so they should be good for advancement today.