One Distraction Up In Smoke

Share All sharing options for: One Distraction Up In Smoke 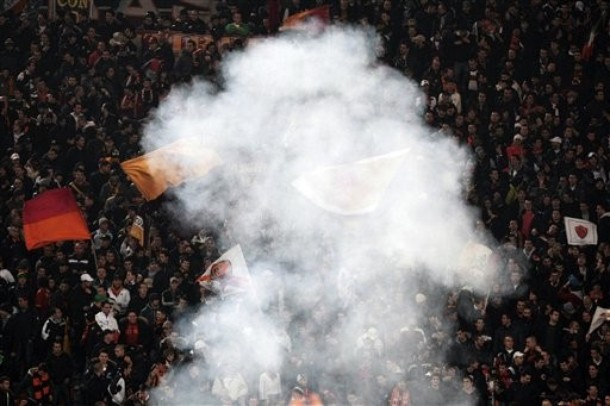 A wise man once said, "there is no crying in the Europa League"...

Alright, that wise man was me, not four seconds before typing this, and the only way "wise" works is if you caboose it with "ass".

Yet it still holds. This is not a big competition, it's not even a fairly prestigious competition anymore - quick, name the last five winners without using the Google Machine... (damnit) - thus there are no tears, no sad faces, and not even a bit of what if. Taken out of competition context, sure, they deserve every bleating beating they can possibly withstand, and it's rather worrisome they've now had three 'blackouts' in seven weeks - though not forgotten it's a marked improvement over once a week - but the Europa League means very little and they played accordingly. See, I was right all along.

But I have nothing better to say than point fingers and doctor up a blameplan, so that's just what we'll do:

23% - Mexes. My best theory is that every time Juan pulled up to draw an offside Philou interpreted this as a mad dash to his worldly possessions and was thrown into a state of frazzle.

12% - Doni. It took Doni 70 minutes to concede 6 goals. It took Julio Sergio 14 games, two and a half months, a Christmas holiday, the change of a calendar, the signing of Luca Toni and Alessio Cerci impregnating Rodrigo Taddei to concede the same number.

He's entered Loria territory: I'm not blaming him entirely, or much at all for the goals themselves, but I see no way Ranieri can run him out based on confidence alone, not to mention having a mighty good third keeper in-house, and I maintain JSB saves a couple of those.

11% - Daniele De Rossi's testicles needing to redrop. We may have learned something today: Francesco Totti is the heart and lifeblood of Roma, while Daniele De Rossi is the balls.

When his man marbles were knocked up into his stomach cavity in the first half, calling forth the most uncomfortable freeze spray moment in football history, the game - the very fate of AS Roma - was never going to be the same.

Never has "the family jewels" sang so true - or so high.

9% - Ranieri. On one hand, I don't really blame the lineup, as there's a huge game on Sunday; but on the other hand...he didn't really rest/play anyone with that in mind, did he?

i. Cerci is simply not a starter. Supersub, and that's that.
ii. No Totti, no Pizarro, no Menez means no prayer. They are the only three with the combination of vision from midfield and the precision not to sky passes forty yards past the intended target with regularity (ahem). What's the point of Perrotta and/or Brighi making runs when no one can get them the ball?

(Feel free to throw a certain Merseysider into that list as well.)

5% - Shut the @#$% up! How many soundbites rolled off the press including buzz words such as "Roma player", " want to win" and "Europa League" somewhere in the title? Infinity times Taddei.

The gods simply do not shine kindly on such proclamations.

4% - The penalty. It's hardly to blame for the collapse - there's no excuse for goals two and three - but UEFA refereeing has taken an absolute shellacking these two weeks.

(And how many moon revolutions did it take for Mr. Referee to whistle the foul? Was he phoning the International Space Station for a better view?)

4% - Arrogance. I believe this one played a far bigger role than 4%, but I'm running out of numbers. There's no doubt in my mind if this were Arsenal again or Chelsea or Bordeaux or most teams not named Manchester United (or the Champions League in general), the 1-0 at least stands at the half. The problem with feeling superior, being superior is being lulled into a false sense of security. It's similar to a prizefight: they gameplanned to impose themselves and did so, but they got caught with a lucky punch and simply didn't know how to hang on.

I think they've begun to believe the endless bits of hype; perhaps this will serve as a nice hearty slice of humble pie.

3% - Influenza. Last I checked, Totti averaged something like 42 goals a half this Europa League season. He buries eight in stoppages and then cracks Cisse's head clean off his torso deep into Curva Sud.

They don't need him, but the best player in calcio is a tremendous help. (Obviously.)

2% - Money. There's not enough of it as incentive. Were the prize money a bit more than the change in Platini's couch, things might've been different.

1% - Vito Scala Clearly the injury quota from this year to last year has subsided. But why that quota is currently being filled by four of Roma's best six or seven is beyond me. Vito should be running around the locker room taking out the knees of Artur (still here), Faty, Marco Cassetti and Marco Cassetti before magic spraying Francesco, Luca, David and Julio Sergio back to life.

1% - Mourinho. I see no good reason to buck the trend of blaming him for everything wrong with calcio right now.

1% - Myself. I see the Europa League as a nice little bonus - a pleasant European run designed to bring the bigger clubs of the smaller leagues to the fore - but nothing to fret over. I believe I've been fairly consistent about this since, oh, clinching the berth last year. And you dare doubt the team takes their cues from me?

No more banging on about the absences of Totti, Toni, Juan, Pizarro, Perrotta or Daniele De Rossi's testicles. There is simply, in this the alternate reality that is AS Roma presently, one man who stands above all: Julio Sergio, larger than life.