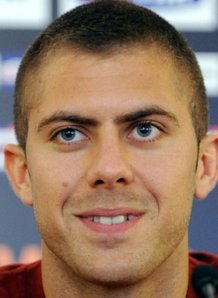 A great first leg result with a commanding performance, as expected.

94' One last chance for Udinese on the corner as a cross lazily rolled though the box onto the unknowing foot of Daniele.

93' Burdisso with a homing mechanism on every ball into the box.

Di Natale for the turn but he had no angle to shoot. Goal kick, which will be taken very, very slowly.

91' There looks to be a lot of legs which are more than happy to watch the ball bound around the pitch waiting for the final whistle.

David tries to beat Asamoah in a race; fails miserably.

88' Yellow card! Isla for jumping on Totti's back like a rambunctious chimp.

Totti goes to show Riise how left-footed volleys are done but winds up with Pepe up his arse. Baptista once again on the counter.

Lukovic had faked Rodrigo right out of his Brazilian back down the other way.

85' Baps breaks....slowed down before Daniele hands possessions right back.

83' Francesco dribbles about 20 yards back into the Roman half. Nice to have him back.

81' You have to think if the injury is anything at all it'll be Juan & Burdisso on Sunday (it may be them regardless), which would render the lineup a non-issue. A guaranteed:

80' Uh oh. One piece of fine china on for another. Mexes coming off, which is not the best of news.

Lovely cut and pass by Wholio to Francesco, just nipped out by the defense. I think this may be his "every other game".

78' Burdisso owns Geijo in the air. Welcome to Serie A.

And he's back on. Would appear the dead leg is the case.

Concentrating on the thigh, so hopefully it's a mere dead leg from the previous collision.

76' Stellar diving header of a pass to Taddei, as Mexes' knee crumples the wrong way under no contact. Oh no...

A freshly shaven Pepe on for Sanchez.

And a foul called on...who else...Burdisso. He is just a battering ram in the box.

73' Yet another corner...which is rewarded with another.

71' I loved the comment from someone in the Udinese management that they passed on Okakachukamuthafucka for another young striker, Geijo. Who happens to be 27.

Brighi for Perrotta looks to be coming soon. Ish. But probably never.

70' David whips in the cross as Fracesco manhandles a yellow shirt like a hungry lion.

69' Baptista wins a foul in space, which is his specialty. Not a great one, mind you, but it helps.

66' Philou casually goes up the back of a zebra. Very, very casually.

And this defninitely a chance for Baptista to shine on the left, where he can cut in for the shot on his right foot to his heart's delight.

Of course this before taking into account that whole "opposition" thing, who will close him down like the jaws of life. Or death.

64' Vuci played quite well, but he is, as is often the case, looking gassed.

The first sub: Mirko off for Wholio.

I do often wonder if giving possession is done on purpose by Ranieri, as if trying to test them for a big game upcoming. Say, for instance, one in Firenze.

62' Numbers sitting back for Roma as they break counter number 912.

It likely won't be long before one of Mirko, Simone or Francesco is brought off for a sub. Brighi for Perrotta sounds the most likely at the moment.

Headed out, break on the way...Mirko threads it accurately to Simone but just a bit strong.

57' Ranieri being choked by the 'as roma' across his jacket as Riise heads the ball out of the six for an Udinese corner.

Mr. Smooth in the house. Floro Flores steaming down on a poor Burdisso back pass and Doni casually steps out of the way with the ball. Sometimes, the lack of firing neurons is a good thing.

53' The vision is there, but His passing and touch is just a bit off today - though as much is to be expected.

51' Burdisso puts bodies on the floor during corners like a Hollywood slasher. Again with the no finesse.

49' Daniele, having watched replays of the first goal on loop during the half, now refusing to pass within 10 yards again.

Daniele with another bomb to Mirko, who cuts in and puts it down in stride for a shot which goes wide. Some smoothness there.

46' Riise just put Sanchez in his pocket. Don't ask for that again. As Mirko pokes the ball away from Alexis for a Roman throw. Hype machine: dead.

No subs at the half for only the second time in a cup game this year. Two-nil leads will do that.

Here's the half in summation:

Sweet little swerve of a throw-in - screwball? - by Mirko onto a running DDR in the box, but it's cleared as the halftime whistle blows.

46' I vote one more to bury this thing before the half.

45' Bounding ball in the box cleared out ever briefly before Udinese put it back in and Sanchez shots just a whisker wide. So nearly momentum lost in a flash before the half.

44' One-touch Roman passing once again. The leash is surely off during these Coppa matches.

Mirko off on a run with a pass to Francesco who, incredibly, bottles the break. Bah - he'll be back to it on Sunday.

At least that godawful hair is good for somethin'. Simple header off the free kick.

A hefty knock for Mirko, but he's walked off under his own power.

Shot of a kid in the stands with a Bayern Munich jacket on. It's a pity there's no joke here because Luca's on the team.

Break coming....free kick as Mirko is launched into flight. And now hurt. Knee to knee, perhaps?

35' While Coppa Catania was 'good Spalletti', this is 'bad Spalletti'. They dominated the first 15, scored a goal, but have now let Udinese back into the game, into possession and, soon, perhaps into the goal.

33' Taddei just had an awesome sequence of tracking back to defend, but it was 25 yards off the ball and nearly off the screen. This is why no one sees his value - except coaches and sporting directors.

31' Udinese with sustained possession until Sanchez is positively stonewalled by Simone Perrotta. Being made of stone would explain his finishing.

28' Each time Udinese come in for a counter, there's a hint of 'well this won't go well'. Perhaps it's because of how the last game between the two went, or perhaps it's because Doni's in net. The combination of the two is damn near frightful, however.

Just as frightful is the fact that Doni is mere minutes away from casually walking out of the box with the ball in his hands for another flash of red. He's nearly done it three or four times already, and I don't trust him to retain a 100% successful avoidance rate.

26' Mirko was clearly fouled, but because he's got a dirty 'stache, Mr. Referee would not give him the call. Bigot.

Mirko just as brilliantly launches the Udinese counter with a pass into space for Sanchez. Corner, cleared.

21' Totti with a brilliant little flick onto Taddei, whose house is on fire and goes for the stop, drop & roll. Three full rotations. Impressive.

20' There are three Chileans on the pitch today. You've got to think that's a calcio rarity. Some of them are even good.

I was just thinking 'Sanchez v Riise could get ugly today' as it...gets ugly.

Working the ball in and around the box yet again, Mirko heads it over. This game is hardly done at one.

15' Asamoah tests Doni from distance; Alex looks as stable as a one-legged unicyclist.

14' Udinese go right back to doing everything possible to bury Roma with set pieces. Antonio Di Natale goes offside for the eight trillionth time in his career.

Brilliant break from the offside trap and he finds the end of a Daniele De Rossi bomb to go 1v1 with Handanovic. No problem.

That was from out of nowhere.

10' Free header not 7 yards from goal somehow, some way headed over the bar by, who else, Simone Perrotta. He unleashes his inner Spalletti during the Coppa, doesn't he? That's fine so long as he continues playing like a herculean juggernaut in the league.

9' Doni with brain fart numero uno. It's going to be a good day.

Burdisso has the finesse and touch of a jackhammer being manned by Baptista. Throw-in.

8' The ball is being played high by both teams early. Good chance to take naps in preparation for the weekend before it bounds to earth again.

6' Udinese actually have a distinct defensive shape. Pasquale Marino must be cutting himself through tears in his basement watching this.

5' Floro Flores was wide open for the header but instead of watching the ball, was looking for cute chicks in the stands. Corner.

4' 'Erratic in the tackle' is the term I'd use right now for, oh, the team picture. Clearly saving the good stuff for Sunday evening.

2' Udinese are doing their best to put the ball out for dead ball situations, while I'm doing my best to avoid eying Philouppe's hair. He desperately needs to be drug tested. Or checked for traces of Mutu.

Let's play the Who's going to leave Udinese this summer? game. The good money is on Inler, D'Ago and perhaps Sanchez if they don't valuate him in the Kaka stratosphere.

Seriously, there are roughly 2,000 non-ultras in the stands today. Yeah, it's the Coppa, but come on - I bet you could get 2,000 people to watch Totti brush his teeth.

Everyone coming out of the tunnel, with Totti's hair very much nearing "mane" stage. God that's glorious.

Judging by the amount of blue seats on the screen right now, I'd peg tonight's attendance at 5.

This has also ticked a light in my head: this game's in Rome? Totally thought it was at the Fruili. Scratch that 0-0 scoreline prediction.

The Milan Channel has spent the last half hour on ode to Ronaldinho with the soundtrack of a 12 year old girl - Enrique Iglesias, Black Eyed Peas, etc. I want to punch babies.

Ridiculously odd stat of the day: Ranieri has made a sub at halftime during every cup game this year - Coppa & Europa League - but one (Basel win).

Yeremy to come in at the half.

Juan: you don't bring out the fine china for a weekday lunch with rambunctious children - could get broken.

Doni: scraps are for backups.

The rest: we want to win this goddamn thing.

Oh, and that Toni fellow.

(Udinese have also run out their first XI.)

Without seeing the lineups, I have a feeling this leg is going to play out to an awfully boring 0-0 draw and the second leg will be won 1-0 by the good guys. Both teams care, and I think Roma a bit more with the chance for a tenth, but both have supremely important games on the weekend. This won't be Catania 2.0.