Back To The Natural Order Of Things

Share All sharing options for: Back To The Natural Order Of Things 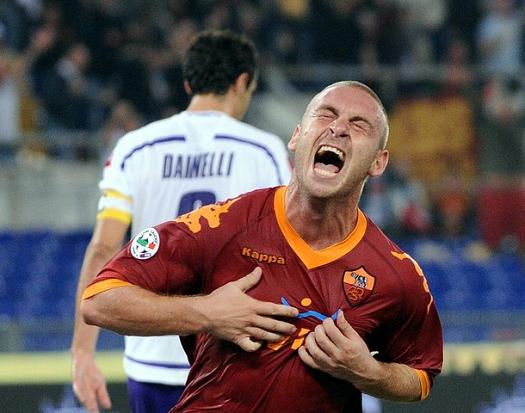 Remember the last time maroon and purple clashed? Amidst lean times - or so they appeared. The Grand Imperial Poobah had descended from the throne; the league table was found on the shelf next to the horror flicks; Basel had emphatically declared its superiority just days before; and Ranieri was hardly the most popular man in Rome.

One turn of the Serie A table and we're looking at the mirror image: 18 undefeated, 48 points of a possible 54, 11 goals conceded since October, and a certain swagger worth more than the first three combined.

Oh, and Adrian Mutu's career might be over. It's like having AIDS which are then inexplicably cured, only to find out that the cure included magical superpowers...and then passing the AIDS off to the asshole down the street.

Short story short: 'tis a good time to be a Roma fan. Winning games via various means, methods and maniacal machinations. Opponent? The bigger the better. Tuscany? I kill you dead, Toscana. Personnel? Pfft. Injuries? Who cares - it's like living a goddamn antiviral dome compared to last year.

There's no point in looking at the form tables, the injuries, the home & away records, or the past. This is the new Roma - Ranieri's Roma. A team with unyielding belief that they will win every single game in which they take part.

So why shouldn't we feel the same?