Udinese: Go Sit In The Corner.

Share All sharing options for: Udinese: Go Sit In The Corner. 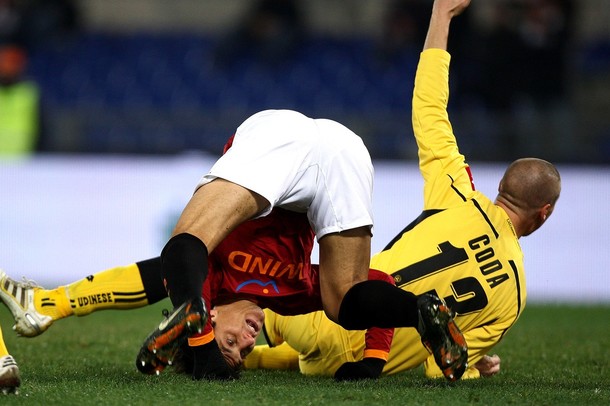 The defining characteristics of this new Roma are not, have not been and will not be Claudio Ranieri's maniacal anti-substitution ways. At least according to the man himself. Giampiero Montali, the mysterious manipulator who's seemingly been pulling the strings in all the right directions behind the curtain, echoes similar sentiments on a weekly basis. There are faults, sure, and the mentality is still suffering from the occasional Spalletti era setback, but beyond anything, they continually champion this the quintessential team. As a group of men who genuinely like each other. Who defend as a team, run as a team, win as a team and lose as a team. They have become a group of one who do things together and, more importantly, like doing things together, as a team.

Unfortunately they like getting suspended as a team too.

Which means that while Udinese got the Serie A XI in the Coppa - the first XI sans Julio Sergio and Juan - they're likely to get the Coppa XI in Serie A. Pasquale Marino sends fruitbaskets (and a resume for the next time he's sacked this season). Ranieri sends out subs for De Rossi, Pizarro and Taddei in the form of Brighi, Menez and Motta, in that order, in a 4-4-2 - or so RomaNews says.

And then there's Luca Toni. And Mirko Vucinic. And suddenly, the losses of DDR and Pizarro don't loom quite as large. Defend as a team, keep zebra chances to an absolute minimum - which they've done against Udinese twice this year, only Floro @#$%ing Flores nailed two out of two - and one of the two should be able to snap something out of his top hat, form or no.

They're not in brilliant form anymore, in fact they haven't won in March, and the lineup's a tad short of ideal, but they've dominated Udinese twice this year and have done the same over the years at the Olimpico. There's no reason to be less than confident going in, and then going out. Even if it'll be all sorts of ugly - as a team.

Rather thin - 18 called for 18 spots - hence the inclusion of Pettinari. (The chances that he plays are, err, slim and slimmer.)

I like Motta on the right side of midfield lots and lots, what with his woeful defending and all this year (he played mid at times at Udinese, too). Particularly with only Brighi and Simone, two wonderful footballers, but both lacking a bit in that technicality department. So hit 'em with pace and technique on both flanks (lots on the left, some on the right), while offering help on Di Natale.

And then don't sub anyone.