All For One & One For All

Share All sharing options for: All For One & One For All 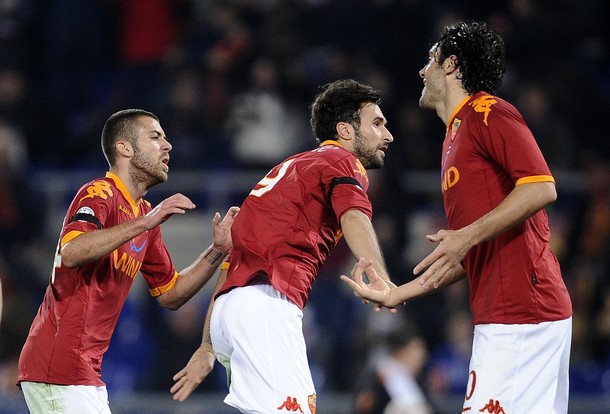 Logic, societal norms and most textbooks dictate that the scorer of three goals should hog the spotlight, the limelight, and any other type of lights. Yet there's Mirko Vucinic, his first Roman hat trick in tow, applauding in the shadows. Of course they could share the spotlight, but on comparison, there is no match: Jeremy Menez was something beyond brilliant. It was everything for which we'd been dreaming of for two years; everything which earned him the lofty, if ubiquitous, new Zidane tag; everything which shows why he is the future of AS Roma. It was by some margin his best performance in a Roma shirt, and easily one of the performances by anyone in recent time. It was, dare I say...Totti-esque.

Whether or not this was his "breakout performance" remains to be seen. What we do know is that this boy is awfully, awfully special.

Mirko was no less the genius, but that, unlike Menez, is nothing new. His ability to create from nothing is ever so rare; his ability when another is doing the creating is the stuff that legends are made of. His ability to find and utilize space is largely unparalleled in the side - give Francesco a mere inch and he'll take a yard, the keys to your car and both your sisters - and when that space is being created for him, he executed like a sociopathic prison warden.

And yet Luca, scorer of a mere one goal (a phenomenal goal at that), played arguably the most integral part: the bricklayer, the part of the unsung hero. Like another Fiorentina legend, Christian Rigano, but good. All game long drawing two, three defenders, creating space against a side which offers up enough space as it is, allowing both Mirko & Menez to shine. He was simply monstrous: in stature, in performance and in impact on the side. Strikers are defined by goals, but the great ones are defined by so much more.

And all of this means I was wrong. Well, only partially. I said it'd be ugly and to a degree it was, with the midfield having the aesthetical appeal of a traveling freak show, but the game was beautiful. Not quite an entirely beautiful performance, but surely a beautiful game by three beautiful players.

The three were all, each more the last, but in no particular order, magical. It was the type of performance which you almost expect, but have no right to. It's almost funny - so often the tridente comes to define the tactical makeup of the entirety when only referring to three of eleven; today, it rang true. It was a tridente - the tridente - which defined Roma. Three men, with bodies missing, threw the back of the team so appropriately on their backs and dragged them through to victory.

It was the perfect example of just what makes the perfect team: when brilliance is needed, it emerges from the shadows.