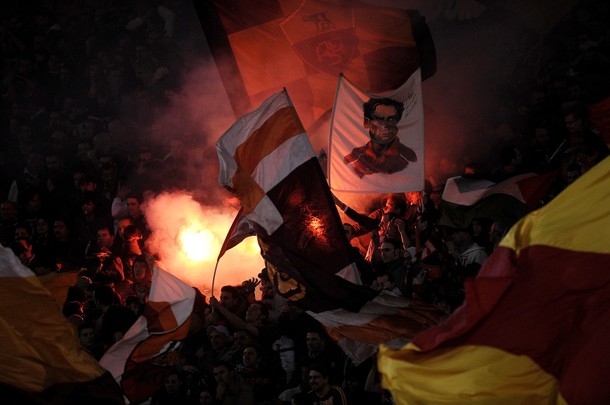 It's almost unfair: I was not, am not nor will be ready for this. Something beyond unpreparedness, surprise, incomprehension or even a conscious jaunt into the surreal. This, whatever 'this' is, looks surreal in the face with malicious derision, spits at it, kicks dirt on its pants and saunters away with an arrogant swagger of superiority. These waters are neither uncharted nor even known to be water. This, my friends, is a black hole. This is the very point of no return.

Because this is unlike anything we've ever seen from Roma in recent times, beyond my time, and perhaps beyond all times. This is a team which was defined to the outside world, and many within, by its mental weakness. One which was deemed "too thin" and Totti-centric; a mad tactical genius's discovery through necessity having "punched above its weight"; a club dubbed the harshest of harsheties, a name so venomous it trembles through the fingers to the metaphysical soul at its very core: overachievers.

And they are not overachievers now. Just as they are no longer defined by mental weakness, a perceived lack of depth or the mindless accusations of no Totti, no party. Just as they never "punched above their weight" simply because the outside world couldn't or wouldn't properly assess their qualities, either as a group or individuals. During these and those times of success they are, and always were, simply: achievers.

Yet the questions still remain. How did this team from the city of gladiators, a team languishing on the brink of death within the frame of one season, actually became a team of gladiators? How has one group of men transformed so from within? How has one entity's greatest weakness become its greatest strength within such a minimal space of time? How has one team so consistently broken through and vaulted beyond the barrier of reasonable expectation?

There are no textbooks, no manuals, and few precedents for such a comprehensive transformation. This is not about playing style or philosophy or confidence or anything which can be readily fingered. The players are simply not the same. They do not behave the same, act with the same mannerisms, project a similar aura or carry themselves the same. I imagine their mothers can hardly recognize them. I imagine at home they're better sons, better husbands, better fathers. I imagine they view the city, the country and the world through a new brightly colored lens. I imagine at training there is a renewed sense of purpose which transcends the football field and sport itself. That this is not about sport, but that this about each other, about a cause; a group of men fighting for something unknown to the outside world, unbeknown to the outside world.

The fronts and the backs of the shirts read the same, the numbers unchanged, the squad too, short of one giant exception, but this is not the same team, because this is not even the same club - neither in practice nor identity. The gesturing shadow from the sidelines cuts a new figure, yet even he, magical though he may be, cannot be credited for the mystical 'this'. From the pitch to the offices and back, something is different. In December, this was the new Roma. This is not even that.

What they are, we do not know. We know even less of what lies ahead. We are working with the unknown, the unimagined and the unapproachable, and we are working merely in theory.

They, however, are walking right through this black hole and right into destiny; leaving behind this earthly, finite world, and in it, our wildest imaginations.