Milan: A Matter of Personnel.

Share All sharing options for: Milan: A Matter of Personnel. 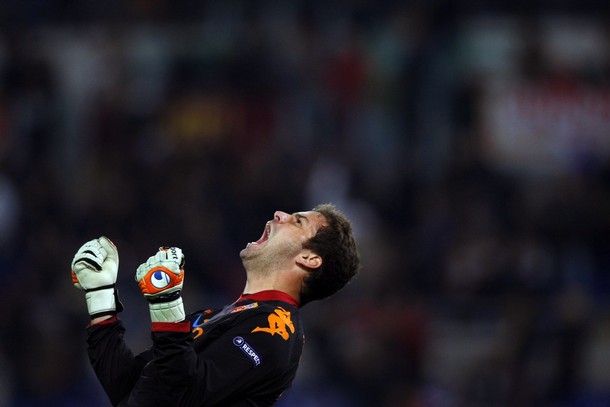 Normally, the projected XI ends the preview; today, it's everything.

What they've done while missing bodies here and there is nothing short of incredible, particularly for a team so lacking in depth (uh huh), but to have these names - these game-changers - back is half the battle in itself. The presence in the box who leads the line and presses the defense - back; the midfield conductor who pulls the strings and sets the temp - back; the saviour between the sticks who pulls off a save or two worthy of canonization per game - back. They may not be fully fit, but the entire scope of the side - not to mention Leonardo's ability to sleep - changes in a flash. They are that important.

On the other side of personnel, Milan will be missing Pato'o, but I'd happily allow them two Ducks for a 15 minute cameo from His Tottiness.

I've always quite liked Ranieri's philosophy of worrying only about his own team - one I adopted some time during the Spalletti years - but for this game, one glaring worry sticks out like a nasty overbite: Ronaldinho. More specifically, Ronaldinho v Cassetti. Or Marco Taddei. Or Rodrigo Cassetti. Or even, given the way his defensive year has gone, Marco Motta. Which means don't be shocked to see Ranieri go back to the early days and run out uber-fullback Nicolas Burdisso along with a set of handcuffs.

Yet with all these names back - particularly that Toni fellow, whose courting lasted a thousand times longer than the time he's actually spent on the pitch and thus return is a bit more romanticism than the importance to the team of the other two - there's one man I want to see on the pitch at some point tomorrow: Jeremy Menez. Twice he's played against Milan and twice he's looked every bit the player his astronomical ceiling suggests he can become. There are some players who simply have 'a team', and there's every chance Milan is Jeremy's team; you run those players out irrespective of form, fitness, tactics, score or
reason.

And while we're still on the subject of personnel, it's gotten to the point that before worrying about squad lists, starting elevens and the state of Franesco's knee against Milanese squads, I check the refereeing designation for one name: Roberto Rosetti.

Not this time. It's Paolo Tagliavento, and it's back on even ground.

A week off for most means a week to simmer; simmer for Napoli, for the Europa League, and most importantly, for the last time these two danced. Which means Roma's back for vengeance.