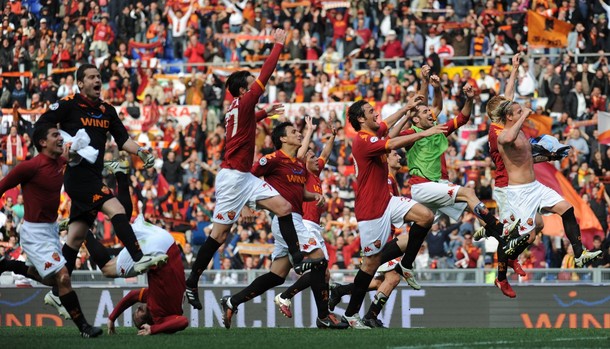 I've sat here writing, highlighting, editing and mostly deleting for close to the last hour. In fact I begun writing :55 ago, or so the timer tells me on the replay. I have no paragraphs, some scribbled words, and I couldn't explain to you one thing which just happened in the first half any differently than I would've in the afternoon.

I'd say I'm at something of a loss for words, but "something of" would be entirely superfluous and far too much credit: I've got nothin'. I don't really care about intricacies of the Atalanta game because, well, if you're here you don't really need to ask, do you? There's certainly something in the newly intrinsic nature of the victory, but that's neither new nor particular unique nowadays (which, I suppose, is unique in its own way), so that's no fun.

And it's not as though I'm sitting here in a panic since the game ended - I haven't seen the jumpy side of a good Roman panic in weeks now (two, to be precise). I've been engulfed in a certain serenity - what was that glorious bald-headed man always yapping about again? - before, during and after the game; a serenity which I'm struggling mightily to palpate. I was never nervous, never on the edge of my seat, never worried. Not during the second half, not never. Perhaps it's down to this Roma - they are no longer the new Roma; they've simply smashed the molds to become, and earn, Roma. A sense of confidence, belief and stability, all of which can be simply summed up in a word: Ranieri. But this aura has and had little to do with the result of one game. Or perhaps it's knowing that this lead means jack-all given the proceedings of next weekend, a game which is even larger than the black hole in which it resides. But it's not that; after all...it's Lazio. I mean come on. Or perhaps it's thinking, a bit unwisely, the Inter game was the scudetto race tightly wrapped into a wholly decisive one-off final, through which the winner would earn the ultimate key to glory from the fates. Not that either - not yet, anyway.

Or perhaps I'm serene because they have nothing left to prove. Not to me, to the fans, to calcio, or to the world. They've slayed the unreasonable, massacred the unbelievable and achieved the impossible. This has been the performance of a lifetime, the season of an existence. I don't know how to say it any other way, any louder, or with any more emphasis: they are simply not supposed to be here.

Yet they are, crashing the party, tearing down the banners wishing so and so a happy birthday while putting up their own, hands deep in frosting and cracking open the gifts. But it's not their party, it's not their birthday, and it's not the designated course. No one invited them. They just don't care.

The game's in the first two minutes of the second half now. I'll watch it some, not really paying attention...

...as if aware to my entirely unacceptable indifference 14 hours after the fact, Totti just backheeled to Menez to create a chance. His vision and persuasiveness are as otherworldly as they say, you know...

...so I'll watch it, paying slight attention - more when Totti instructs me so - to the football, but really just enjoying it, as I'll enjoy the rest of the season. Impossible though it may seem, I won't be able to help going through serene as a summer's breeze, for a reason I may finally know:

It is done, and I do not believe it.

But I do believe.