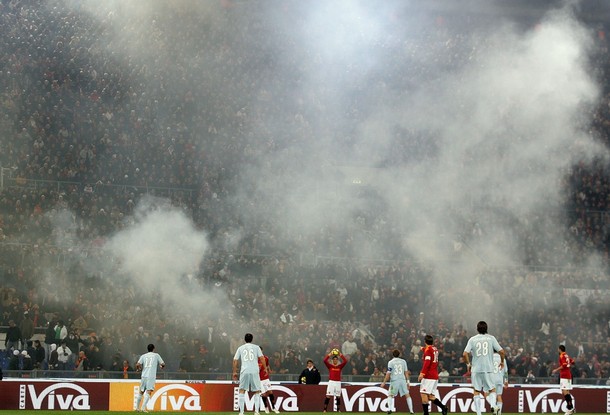 There are no words to appropriately encapsulate the significance, ramifications and basic mathematical importance of this upcoming derby. Perhaps because they don't exist yet.

The entire scope of this derby can only be measured in the wake of another derby, the one tomorrow between...I was going to make a less-than-clever Calciopoli I & II joke here, but my head hurts just thinking about it, so we'll go with...2010 Victims of John Arne Riise & 2010 Victims of Luca Toni.

I like watching them beat Lazio. It reminds of watching the unintelligent, short, mad at the world kids - now known by their adult names, bodybuilders - work into such a lather over the most basic of human tasks during school whilst you walk through that spelling quiz like it were a...goddamn spelling quiz. That type of schadenfreude lives on in a tiny little furnace inside your heart which can be flicked on to warm the cockles whenever you're feeling a bit down. Or when you're feeling up, like now.

One of the musically inclined fans needs to mesh a trance remix with this gif into a video of sublime schandenfreudic joy (Webster's is fuming).

However, the title race reigns supreme. I like those better, to be truthful. I suspect I do not stand alone. And so the true weight of the weekend can only be taken once the table is updated at full whistle on Sunday, because this weekend, they play two.

For Lazyo it's a different matter entirely, a sentiment which is getting awfully tired. They have nothing else to look forward to this season, except for maybe, perhaps, if they're lucky staving off relegation - again - along with the privilege of once stepping onto the same pitch with Roma. And if things really go their way, they'll get to see their "star" player (hey, 3 goals is an improvement upon most years) earn a suspension and hang out with some sweet lookin' gorillas freshly escaped from the zoo. 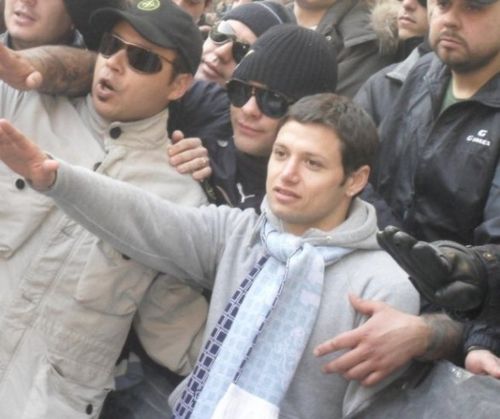 This would be the portion of the post where we transition stupidity from "Down Syndrome baboon" to the birth of "pulling a Zarate".

Of course the whole of Lazio is "pulling a Zarate" this year, led by Zarate himself, which I suppose means in the most literal sense he's spent the year pulling on himself, which is damn near the most poetically accurate portrait of this kid I've ever heard. Self-portrait, perhaps. (You'll thank me for not embedding that.)

Much of this is because I base my life on two truths:

i. Roma is grand.
ii. Not watching Lazio will improve my life significantly, regardless of epic suckitude, schadenfreude, shittiness or any other three syllable 's' words (scrotumness?).

There may or may not be a few more "truths" behind the curtain, but those seem the most relevant at the moment, and living in the now is where it's at.

So with that, our present is a cloud. A grey cloud, perhaps, formed by one part black, one part white. And until that cloud has dispersed, we are left in the unknown. In that unknown we shall wait until tomorrow evening, locking arms, standing in unison, reluctantly chanting two very foreign words...