Confessions of a Derby.

Share All sharing options for: Confessions of a Derby. 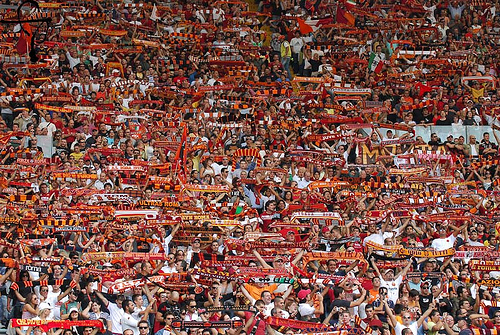 This is what it's come to. I have nothing. Not "well I'll just say I have nothing which will then transition into the invaluable 'something'" - the ploy of a wily old veteran which has fooled no one, I presume. I am being quite genuine, as my mind is utterly devoid of Roma-related words. There are drafts somewhere, but they're forced - I don't do forced. It's not fair to anyone. I fear that I have remained that which I've so boldly claimed to be: utterly tranquil. I don't like it. My heart rate hasn't risen above a half-dozen - I make cool as a cucumber seem like a pickle - in what feels like years, though a quick memo from my cardiologist says I'm talking bullshit. This may be true. I do know I've slept like a baby with a sleep aid addiction for the last week. It's been a beautiful week. Tonight will be an equally beautiful and tranquil night of rest.

When the game begins tomorrow, I will feel the same. It is arguably the biggest game in recent years; a game which is even more than the considerable sum of its considerable parts - one part derby, one part title challenge. It's a monster of a colossus. And yet...

I care, obviously, that much is inarguable, but I fear nothing and I feel nothing. I am not inspired, as I should be. I just am. Because Roma just are, just is. For that, I am utterly tranquil. After all, in the last four months they have disproved all in the sport we once believed to be absolute.

Why should this be any different?

Tomorrow, there will hopefully be words; words at the least. There've been server errors here for the last couple days, as you might've noticed, so there's a good chance the liveblog will be run over at chiesa di totti. This one obviously cannot be messed. So check here, check there, check early - and bring the pulse that I am missing.