The Diary of a Derby

Share All sharing options for: The Diary of a Derby

Update: As a result of server issues, the liveblog has moved to chiesa di totti. 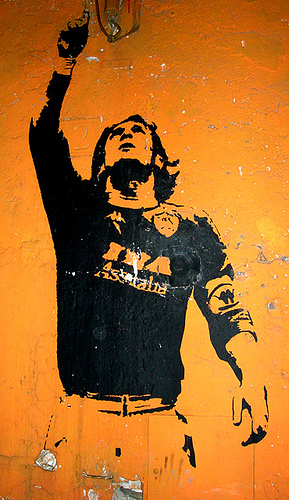 A "liveblog" seems far too insincere, too impersonal. A diary is fraught with more emotion - the emotion of a derby, say. This seems more appropriate. It may go well, it surely may not, and by the end I do declare I will have declared myself the king of Spain.

Heartrate is still right at normal, despite the espresso holding court on the sidetable next to me, and despite the fact that I very nearly died this morning but for the reflexes of a Julio Sergio. I'm starting to think this has little to do with Roma and perhaps I should go see an actual cardiologist, not the made up one which often makes an involuntary cameo here from time to time.

RomaNews has something Shakespearean about the tridente (to tridente or not to tridente - that is the question). The above is my predicted, not RomaNews'. Do with it what you will, but do be gentle - she has work to do today.

I'm passing the time with Sampdoria v Milan, as I'm sure are many, and I've come up with two thoughts:

i. I'm not sure today's will be the most difficult game of the next 8 days, much less the year or anything more. Storari's giving nightmarish flashbacks.
ii. I hope there's an agreement that Guberti isn't allowed to play against the parent club next week, as he interrupts my sentence with yet another slalom. Of course this means nothing of his future because even though I love his game, he isn't exactly the ideal piece for the Ranieri method.

Thinking more - on Roma, not Goober - I see little chance of Luca Toni not starting this game. Menez is a yellow card magnet, for one, who can't tackle, which I'm sure plays far more in my mind than that of Ranieri, while Luca's simply a monster at absorbing defenders. Lazio play Reja's three in the back, yes? Yes. It smells of Mirko getting the chances of a lifetime.

Apparently all is calm in the Eternal City. For now.

The day is very, very long.

There's every chance this game stands 1-0 or 0-1 at the half: all seven games featured a 1-0 lead at the half in Serie A today. Coincidence or fate?

I quite like Samp in their current incarnation (a lot...a real lot) but the Pazzini winner at the death isn't what I wanted to see. No reason for them to walk into the Stadio Olimpico holding their swollen grapefruits. A nice, frustrating draw in which they couldn't pierce a ten man goal would've been fantastique. No such luck.

And there she blows: the 4th placed team comes to Rome next weekend with chests puffed out.

Suddenly, Lazio's position has sunken a few more inches into the ground:

Heartrate hasn't budged a dollop. I wonder if this is what Steve McQueen felt like everyday - aside from his lungs holding a mutiny and all that. Now how to pass the next 90 minutes? The early thought is to start wading through the inevitable minefield of streams now, but that might be best served at game time: 90 minutes is an awful long time with so many breakables sitting around the house.

(I'm lost in YouTube. I shall return shortly. I think.)

I don't believe I posted the latest Ermes, which was entirely out of protest, because Al Pacino is just awful, but I suppose this'll do for today:

I wonder if the scriptwriters realize the guy who's willing to die for that inch often can and sometimes does die? That, to me, DNE winning - inches or anything else.

RomaNews has unleashed onto the derby lovin' world their probable formations:

Methinks Zarate needs to look up the definition of greatness: "great" players do not ride the pine in a derby whilst battling relegation.

And it's worth noting this is a 100%, no questions about it full squad. Like 08/09, but the complete opposite.

Also: even though I treat the written form of RomaNews' projected formations with the utmost respect, I'd like to call Luca Toni on the right wing "unlikely". That, I suspect, would send my heart beating like a house remix.

We are now officially "minutes" away. Many minutes, but minutes nonetheless.