A Tribute To Claudio Ranieri's Coconuts

Share All sharing options for: A Tribute To Claudio Ranieri's Coconuts 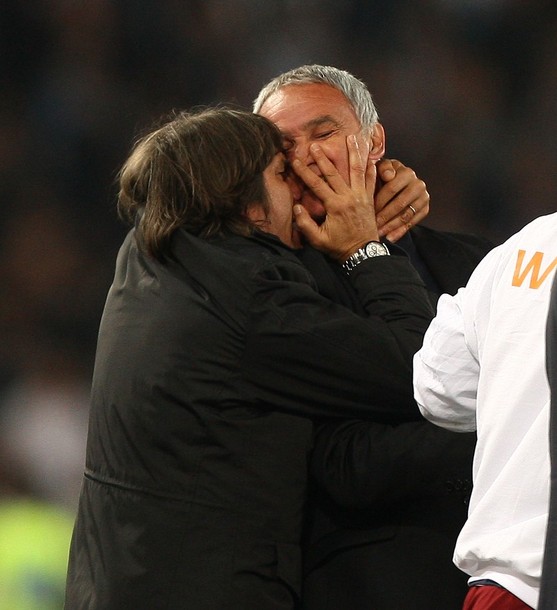 Before the derby, there were no words; now, there cannot, will not be enough.

It will be years before we see such an audacious move on a football pitch, and we may never see such a move on such a stage again in our lifetimes. Taking off your two best players, your two homegrown Roman sons in a derby, a losing derby, and in the biggest club game of their lives. It wasn't just brazen, bold or borderline arrogant: it was flat out stupid. There's a lot of hyperbole in football, but Claudio Ranieri wasn't talking about metaphorical crucifixion in the event it backfired - the cross was ready, the gates swelling.

“I didn't explain the substitutions to them. They were booked and felt this event too keenly, it doesn't let them play the way they can. So I preferred to make a change and go back to the old system.

“It was a tactical decision as well, but I had to use a bit of everything to make this choice. We were not 100 per cent with Daniele and Francesco in those positions, so I preferred to remove them.”

“If we'd lost after those decisions, I would've been crucified!

“I have made many difficult decisions in my career. When I was at Valencia, I took off Romario and I still regret it a little, but it was the right thing for the team. I always have to do the best for the team.

“They are our captain and our future captain, so they may be disappointed, but at the final whistle they were happier than anyone.”

Now, he is a genius. Perhaps, today, The Genius. Then again, I suppose there's no good reason to wrastle Il Genio away from Mirko today, is there?

There was something tactical in the decision, something we all saw - Tovuto simply, if it is ever to work, will need months, not weeks, of gelling and, dare I say apologetically, tinkering - but far more importantly, there was something distinctly Roman about the substitution. Only a Roman could truly know how much they care: too much. It's been said time and time again, and it can register, but we can never truly know because we have never stood on the Olimpico grass during a Roman derby. Ranieri knew. Both were bogged down by their own desire, and both would further be bogged down by their yellow cards, one or both an inevitable red.

So in this foreign, alternate universe which Roma currently calls home, taking off the two Roman icons was the most Roman thing Ranieri could possibly do. In some strange way, a victory without Totti, without De Rossi was more Roman than with. And in some strange way, "they have disproved all in the sport we once believed to be absolute".

In the first derby we had The Save. Today, we have The Substitution. Two extraordinarily impacting moments, unthinkable strokes of mad genius, from the unlikeliest of men. If you'd been told in August that the two men who would lead Roma to glory would be Julio Sergio Bertagnoli and Claudio Ranieri, what would you have said? Utter madness. No less the madness of taking off one Francesco Totti, one Daniele De Rossi at the half of a Roman derby. Not merely with pride or the derby on the line, but the season.

Of course like all genius it takes a stroke of fortune, and Julio Sergio will play second to no one for the second straight derby. He was again a hero, again confirming an ascent to legend with the same speed of those cheetah reflexes, Claudio was simply first, simply inspirational.

It takes stones to make that kind of move - Roman-sized stones. When they appointed Ranieri - at the time what seemed to be the favorite of two choices - we loved having a Romanista at the helm. He understands. He's one of us. Perhaps what we forgot is what being a Roman, not just a fan of the club, means: the borderline-arrogant fortitude to do that which no one else dares. The strength to turn the boat right into the tidal wave, with the belief that it's not just the right move, but the only move.

There's always been something special, something not quite real about this season lingering in the air. Last night, we got tangible proof. Last night, two new moons emerged in Rome, both emanating from somewhere within Claudio Ranieri's pants, and now the city, the club, the fans are basking in their brilliant glow.