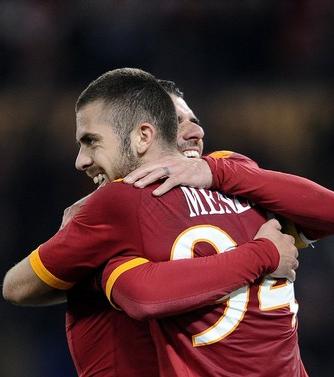 Roma v Inter in a Coppa final. So at least it'll be something fresh and new.

Pepe knees the ball out for a goal kick at the far corner and...

91' Tonetto wiped out Sanchez. I love that man. Free kick.

Pepe lays off a sitter to...Julio Sergio. Di Natale had the 2-0 easy. ADN or Corradi, for that matter.

89' Taddei whiffs and Menez stonewalls Pepe in the box. He might be MOTM despite playing 20 minutes. (Well, MOTM will come from the back, but Jeremy's been brilliant.)

That's definitely the Achilles of JSB's game: coming out on long balls into the box.

88' Apparently that rebound turned SB into Doni, because he came out for a high ball into the box and Corradi won a free header but skied it over goal with the typical quality of an ex-lazie.

Inler off the post, and Julio Sergio took the rebound off his mug for a corner.

87' Udinese should've had a corner, but it's goal kick. Roma do the honorable thing and gift back possession.

85' Menez clipped, no call. Reputation no call, if you'd like.

Cassetti sent off for shirt grabbing. Excellent again. Two yellows in this game, both to Marco Cassetti.

82' Udinese back with that sense of urgency. Here's the problem: if Udinese get another, the game extends. They don't need that...Mirko 1v1, Roman corner. See, this is what a bit of quality does.

Daniele puts a ball to Asamoah's foot, who's not 2 yards in front of him, and Udinese go down the other end and score. Game on.

Let's be honest: Baptista's gone in the summer. And right now, he's gone from the pitch.

80' Mirko coming on, presumably for Baptista, whose greatest contribution today was allowing me to use Whoolio, possibly twice.

78' And Menez is finally stopped on a run. Roman possession now, a foreign sight - and site - this half, as they give it back before this sentence is done.

77' Daniele on a nice run, then threads his pass to Lukovic.

Mexes gives Corradi a running Zidane in the back of the shoulder. Foul.

75' I can't help but look up and see Menez somewhere near the center of play. And again.

72' Di Natale with acres in the box, which is dangerous as it's pinging every which way before JSB eventually is impeded and wins a foul. Menez: everywhere.

Corradi on for Ferronetti. Not too much subtlety in that move, eh?

70' Menez outruns himself, puts the ball out for a throw rather than goal kick, and Udinese are right back down the other end. The best of intentions....

69' Jeremy's tacking back, making runs, causing fits and not giving up. He's turned into a hell of a player these last few months.

Menez break......brilliant Menez.....and Menez eventually wins a foul. Whoolio heads the free kick without knowing where the ball is. Excellent.

67' Cassetti takes a cross in his danglies. Both teams now in a prayer circle on the pitch.

65' Max coming on, for Faty. Ranieri clearly reading this liveblog on his mobile. Give us the thumbs down, Claudio.

63' Replay of a brilliant back-legged tackle by Daniele a few minutes back. smoke/fog now on the pitch.

61' Ferronetti just destroyed Faty and at least three members of his extended family with a lunging tackle, the possession after results in Inler over the bar.

Totti and Corradi having a stop and chat on the sidelines. Presumably discussing his next derby gesture.

58' Pepe Le Pepe whips a free kick a foot or so from the far post. Luca fouled. Again.

56' Tremendous flying fall from Pepe. He got more distance than a European airline, though that's not saying much right now. Toni defends brilliantly for the 80th time in four days.

Taddei, Toni and another red shirt with a 3 v 2 in the box, and Rodrigo puts it just about the only place they wouldn't have scored a goal.

52' This team belongs headlining a freak show. It's hilarious.

51' Di Natale putts a sitter eighteen yards over the bar. That should've been a goal. In fact you'd never bet on it nott being a goal, much less with Di Natale on the wind-up.

50' Faty foul, as Burdisso's continued finishing results in a near own-goal.

49' Faty stepovers with a predictable result - blocked cross. I have to say, nothing has inspired me less in recent Roman times than Ricardo Faty calling for possession on the left flank. It's like the devil handing you a gasoline canister to put out the fire.

48' Tremendous interception by Prime Time Cassetti, and Luca is then fouled for the thousandth time, but not before he puts a giant palm in Inler's mug.

47' Sanchez had Burdisso 1v1 but passed to Di Natale instead, who whiffed. Udinese now pushing the ball with pace...the wrong way. There is something horribly dysfunctional about this current side.

46' Asamoah falls under his own power, foul on DDR. Luca stood up, no foul.

Everything the lineup indicated it would be: efficient, effective and abysmally ugly.

No Perrotta, which is fine - there are a half-dozen or so central mids on the pitch now anyway.

Menez is on the bench, in pinny. Apparently RomaNews was wrong.

Pasquale is flopping everywhere right now, though Rodrigo just leg hooked as he was going down him to keep GP from opening up a run. Genius.

44' Luca Toni spin. Time for someone to turn in their retirement papers in the morning - Pasquale.

42' Worth noting, however, this lineup is very much doing the job being asked of it: keep Udinese from earning chances and thus earning a trip to the final.

40' Fortunately, Udinese are technically gifted but couldn't find their teammates in the final third with a steering wheel, a GPS and a Nepalese sherpa.
This game must be awful for the neutral.

38' A calamity of errors in the attack right now. Julio Baptista had a tough, Luca had a touch...both thought the other would take it. If this team as constituted scores anything but a ball off Luca's head from the run of play, I'll strip like Sabrina and run around Rome. Or my living room.

36' Inler climbs up Brighi's back like a prison shower scene, foul, and then Cassetti runs it out for a goal kick. This isn't the prettiest thing you've ever seen, surely.

35' Faty gets all ball, with possession. Foul.

34' Brighi pulls a Cassetti, snags Asamoah's shirt as he's running side-by-side down the pitch. Unlike Cassetti, he doesn't feign innocence and walks away.

33' There's actually a bit of sustained possession happening now, and Taddei's playing like an animal.

31' Taddei's thieving balls like a master criminal and Mexes is pushing up like a master at not knowing where he belongs on a football pitch.

Wait...sorry, I thought those were just a standard part of football nowadays. Moving on.

27' Paolo Sammarco down on the pitch, writhing in (surely) genuine agony with a fave which could only be described as a mustache-less Freddie Mercury. When he was alive.

26' Handy tries to out-Doni Toni and just about seals the tie for Roma, as Lunchlady Rodrigo elbows Pasquale in the face.

25' Since when are Udinese sponsored by Frankie Garage? They're everywhere.

22' This looks like an old American football formation or something: four flat in the back, four flat in midfield, all pulled in narrow.

18' The game in a nutshell for those who aren't watching: Udinese with the bulk of the quality possession, but Roma are keeping them out of dangerous areas in the box, and Luca Toni is being left to fend for himself.

Handanovic just gave Zapata a forearm shiver. Team chemistry like this is why a team like Udinese is fighting relegation.

16' Riise's hair has been gelled straightforward. I'm not sure what's going on with him today, but I'm damn sure I don't want CONI anywhere near the equation at the end of the game.

14' I think Luca wants a red on Lukovic for clipping his ankle. Or a banner of some sort. Here's the problem with Luca: no one has less control over his own body when running than Luca Toni. His falls, even when he's legitimately fouled, look like the worst of dives. I suppose this is the price you pay with a limby 6'5 frame.

...as he misses the final nail in the coffin 6 yards in front of net.

13' This game is extraordinarily boring, like a Coppa Italia squad playing a team whose sole purpose this year is the Coppa Italia. Or Something.

No Menez, no Vucinic, no Totti...no fun.

11' And speaking of Whoolio, his most favoritest team is coming up on the weekend. He has no chance to play, but at least there'll be a "break in case of emergency" box sitting on the bench, should Ranieri need it.

9' Whoolio whiffs on a volley at the edge of the box. His Roman career in miniature.

6' Udinese are playing with some life, testing the back a bit. They need to.

2' Faty almost fell down again. Who's putting lard on the bottom of his boots?

1' Honestly, this is such a treat - not having to care so much about the result...yet. Once Di Natale gets his customary three, then we can start the bloody fingernails.

You know what's funny? There's a decent chance the only one of the Roman forwards who will go to South Africa is the one man who's now completely forgotten: Julio Baptista.

I don't particularly care who plays today, I'd just like to see Yeremy. The boy's fun to watch. Yeremy hasn't even made the bench. And yet, he's likely to start on Sunday.

This lineup isn't at all what was expected, but it is one thing for sure: designed with an eye to Sampdoria. If I were to wager, five of today's starters will be in the XI on Sunday, and one of those has only had 45 minutes of football in the last 10 days (DDR).

My new pet player for the day, now that Yeremy has been relegated to running circles around the locals of Udine during the game, is Max Tonetto. He was once the irremovable workhorse that is Riise; now he's played a mere 195 minutes this year, and only 1 since November 8th. He meant a lot to the aesthetic glory years of this team and as his tenure comes up, or so we expect, I'd like to see him maximize his last hurrah.