Living In The Past

Share All sharing options for: Living In The Past 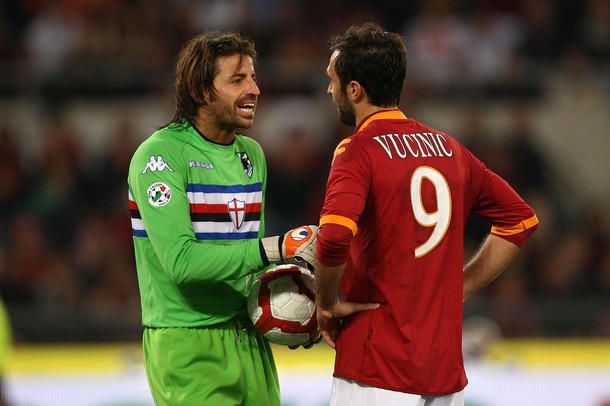 Roma against Sampdoria had a certain resemblance to Sampdoria against Milan last week in the final minutes with the score also 1-1: frustrated, impotent, and putting balls into the box with a prayer, a draw the only apparent result.

The difference is Sampdoria scored in injury time while Roma did not. They didn't have the chance. And that's my gripe: Claudio turned this game from one which is played over 90+ minutes to one which was over in 85. Those eight or nine extra minutes are immense - think Siena, or Juve. Those are precious, priceless minutes in a football match.

Draw or loss did not matter, but time did. They had a chance to win this game by keeping it even until the very last instant.

I have little gripe with the Luca sub. It's attacking and a little ballsy, but it's not silly. The second sub was silly. The Taddei sub opened the right - opened it entirely, as Rodrigo was running up the pitch as Sampdoria were in possession and busy threading the ball out wide - which pulled Burdisso which opened the middle which forced Riise to defend. Or not defend, whichever. In fact on both goals, Burdisso was pulled out wide, though under different circumstances. (Juan made a living pulling out on the left in the first half.) Sampdoria are good on the wings and Pazzini is great in the box. They are, in general, a really good football team. They're in fourth for a reason. It's simply a recipe for disaster.

As he made a tactical move in the derby, this was a move made with little concern for tactics. Merely chucking on attackers is nice, and might work on a video game of choice, but it does not automatically equate to a greater chance at winning the game. When Rodrigo came on for Marco, those chances of winning dropped. A second for someone seemingly inevitable, with Sampdoria having the red carpet.

However, this isn't to take anything away from Claudio. He's been magnificent. He deserves a lifetime contract. He deserves every plaudit he's earned. He deserves the right to make mistakes. He deserves for this to be forgotten in the morning, and it will - I'll still have his babies. A speck on a glittering resume thus far.

Otherwise, it was a cruel result. The first half was some of the best football we've seen from Roma this year, any year. It was Spalletti-esque. Then, they came out of the locker room almost resigned to their throne of superiority and conceded a goal within the first 15. That too was Spalletti-esque, unfortunately.

And now 24 is gone in a fiery blaze. Hopefully, much like the brilliant Jeremy, it will rise anew and graduate to 94.

And poof, it's gone. I contend Ranieri made the wrong call at the wrong moment, and that's that. Might be wrong, might not; like I say, there's a reason he's there and we're not. Still the right man at the right time, and that's beyond dispute.

Now hopefully the team will be forget about this game as quickly as I, as there's still much left to play for. Everything, in fact.