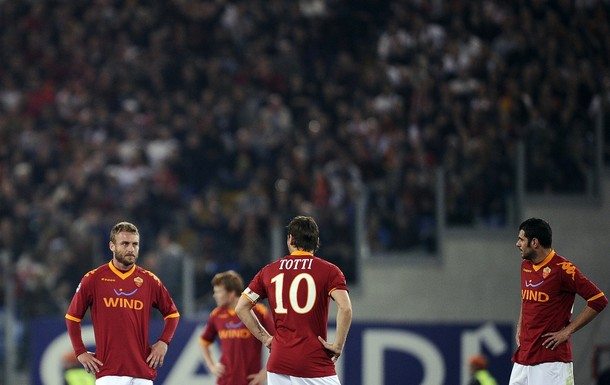 There's a game tomorrow, and they can go top again, while not really going top. It's a strange thing, the live table update; all too much an indictment of the modern game: misleading, cruel, underdeveloped. If Roma beats Parma - and this is an 'if', as this is surely the greatest test they've yet been posed under Ranieri: the ability to pick themselves back up and fight on in the face of heartache and surmounting odds - it will mean little. It will mean they've passed their grandest test by accomplishing the expected. It is, to use an overused favorite, an unreasonable request. This is where teams crumble; the least to win, the most to lose. They need it. They need to need it. And I need it.

I've never lost faith in or respect for a sport as I have this week. A week beginning with Lady Luck's scoff at the righteous to uefa's upcoming Video Replay finale to the unthinkable methods of referee designation which have us tearfully begging for the return of the more favorable days of Calciopoli, and back to Lady Luck ignoring the narrative of hoisting a title in a home ground. All of it too much, too basic, in too short a frame. Strangely, much of this, all of it of philosophical proportion, is encapsulated in a simple tackle in a simple game under largely meaningless circumstances I had the good fortune of witnessing. It was a tackle of exceptional timing; of a man born with the spiritual design and sole purpose to be a football defender. Not to become a football defender, but to be one. Twenty years ago it would've spawned sonnets and odes and thousands of babies scissor tackling the umbilical cord out of the womb nine months on. It was extraordinary.

It earned a yellow card.

As the game evolves, it devolves.

I need a reason to believe. Saturday, they can give me that reason; Sunday, the road to rehabilitation can be confirmed.

But I will never say it - ever; for that will be the day I've watched my last game. I must hold onto something.