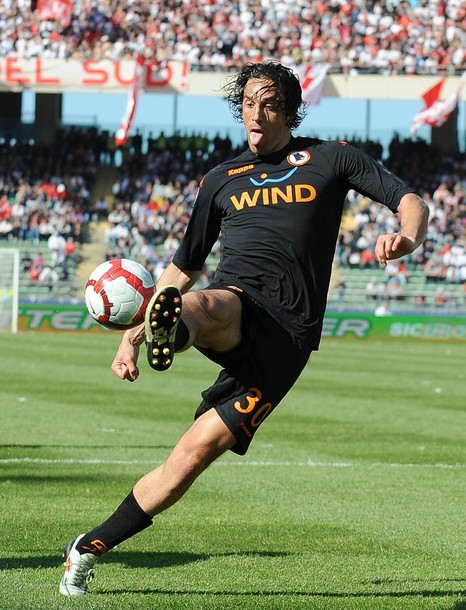 The loss of Bari from Serie A was a loss for all of Serie A. You'd almost forgotten - almost - what a wonderful place that stadium can be to merely watch a game being watched. It was so good Daniele forgot he was in the wrong stadium to take off his pants.

Either a tribute to Cassano or the rumored split with the Mrs. is weighing on Daniele heavily.

(Also: Renzo Piano couldn't have designed a Luca statue any better than the real thing produced above.)

It was everything I expected: they were hardly glittering, hardly the finished product, what with such a massive "tweak" to the lineup, but the result was hardly ever in doubt. They were better, comprehensively better, and deserved their result, but they didn't light the world afire.

The big thing, obviously, was Tovuto. It did, as expected, fail to meet expectations. It also, as expected, produce flashes, including the goal, which leads one to think Jesus may rise this year as a tactical tridente. They might just be one gel-session at home against a surefire Serie B squad from absolutely burying the next team in the queue in a brilliant inferno of sparkles and glitter and fireworks.

But genuinely, I think this is one of those games where the highlights - the minimal highlights - sum it up nicely.

Lovely to have the three points, and it was largely a good performance, now onto improving for next week. I plan to catch this one again on replay tomorrow, as I was quite distracted throughout, so 'til then there's this. (Which is quite a bit now that I look at it.)