Share All sharing options for: A Very Roman Victory 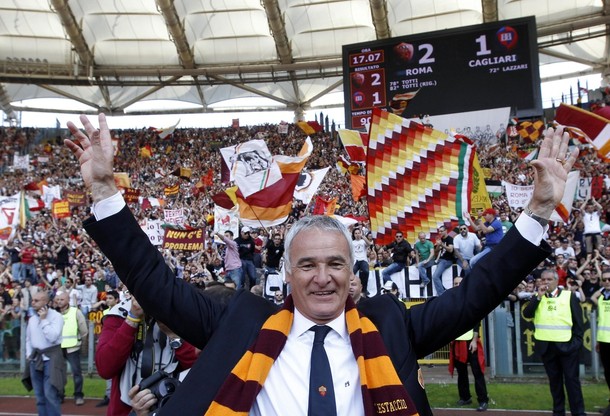 It was there for the taking, the world waiting to confirm Roma's Ranieri rise as nothing more than a short-lived anomaly. They would once again cower back into their mental shell, collapsing when it mattered most, throwing away points against smaller teams, and failing to be the machine required for glory. This was the Roma ending to the storybook plot begging, the final dagger thrust inward, with no one else to blame.

He had other ideas. Roman ideas.

The game had an all too familiar feel in the first half, knocking the ball about as though it were a playground, making runs like a man we once knew was reflecting on the sidelines, no greater example needed than Marco Motta's teasingly throwing a "Hey, look what I can do!" wondergoal at the post as if on purpose. A five goal halftime lead wouldn't have flattered. Statistically, Cagliari's first shot came in the sixtieth minute. They had everything. Except for the goal.

And then came the letdown. Or maybe it wasn't a letdown. There are many theories, and one of them would be Ranieri wanted to draw out the opposition in a too often clogged center of play, thus affording more space. Whatever it was, it didn't work. They hadn't quit, as it only lasted for a bit, but it was eerily reminiscent of the old Roma, the blackout Roma, the Roma which would go down 1-0 on one of a few chances in a game in which they were vastly superior, but had simply forgotten to score. Then Lazarri came, fate seeming all too familiar, the season not yet in flames, but the gasoline had been poured and the match struck. Only one thing had been forgotten...

This isn't the Roma we once knew. Mentally it's not even a distant relative of the Roma we once knew: it's Ranieri's Roma. They'd done it before, notably against Cagliari in this very same fixture last year, but a pattern has been emerging this season which can't be ignored. Juve, Siena, Lazio, Fiorentina - they win games late when they have to, when you think they're dead in the water. No one's perfect, and they've reflected that, but this was another Ranieri classic: doing that which needs to be done.

Francesco played the hero and he deserves his due, but Claudio laid the groundwork.

And with that, I leave you with this:

On September 1st, Luciano Spalletti resigned from last place; on Sunday, the final Sunday, they will play with the scudetto on the line.