The Love Returns One Last Time

Share All sharing options for: The Love Returns One Last Time 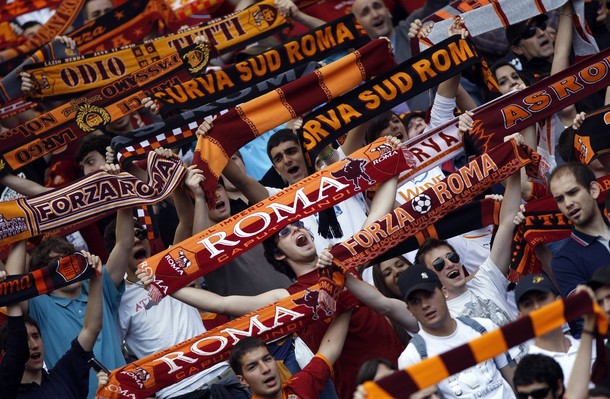 The very first title of the calcio season here, that of the Genoa game, was The Love Returns. It wasn't as carelessly chosen as most, normally the afterthought of the afterthought. They are the love, and they returned - obviously. It wasn't a particularly good return on the balance, but it was a return and any Roma return can't be but a good thing.

I get a strange sensation whenever they walk out of the tunnel, I think they call it joy. It's strange to me to feel such an emotion about a sport when I feel I should've bypassed that point in early adolescence. I crack an odd smile when I glimpse the shirt, even more odd because I like neither that shade of giallo nor that shade of rosso as sheer colors go. Have I admitted that before? I think so. But I don't. I love the colors, but I don't like them. I suspect this is what having children is like.

I can't adequately describe gameday. The sun shines brighter, the air feels crisper, the flowers taste better and the water smells similarly. See, it's so good I cross senses. It's as though my upper torso has been raised up onto a pedestal and rests there, no care, all support, like Carlo Mazzone's manssiere. (We kid because we love.) A playful bounce in the step, a kick in the walk, a smile on the cheek; it's the clichéd movie line you hear in the endless parade of cookie cutter romantic comedies, only for serious, and without bad acting, just good being. Ergo: the love.

The game itself is the gauntlet of human emotion being run alongside a team which milks it the last drop like a frustrated farmer. It's almost unfair to be so vulnerable. The British claiming to have invented the game is poppycock; surely it was devised as a torture tactic in ancient warfare, Roma's hardened existence the only thing which could make a diamond crack. I'm an exceedingly calm person, but I throw hands like Stefano Guberti doing his best Muhammad Ali throughout even the most mundane of fixtures. By the final whistle, I start to wonder just who the hell I am anymore; that pedestal in my upper torso is gone, the heart, at least it once was, bouncing around the rubber room in which I belong.

And that's the best part. Throughout this, it's for them that I'm losing my sanity, not for me. It's 'my' team, if such a thing can be said, and therefore I want them to do well, to win all they desire; but on the balance, it means nothing to me. I don't get to touch the trophy, I don't get to put it on my résumé and I don't get to look back through dewy eyes at all the hard work and sacrifice which enabled them to get there. I simply get to take joy from their joy. I think that's the love.

Someone emailed me recently asking why I love Roma. I haven't yet answered, largely because I didn't have one, and this seems as good a time as any, so here it is: I don't know. You don't explain love, it just is. There is no earthly explanation for why one object of equal parts extracts a superior reaction to another object of equal parts. That's the nature of it all. You don't choose these things, they choose you. I don't know why Roma, I just knew I was in trouble from the start.

And yep, I'm still in trouble - consequently, I've become trouble. It's a strange evolution, this Roma.

As the season dwindles, the love grows stronger because I know it will soon leave, and I will have to spend the months alone, with only phone calls, letters and that ratty old scarf I cling to at night in the sweltering summer heat. I cherish every moment, wishing back the minutes, pointing angrily to the watch I'm not wearing like the true heir at Manchester United. The crunch of the season's crush is bittersweet when something is on the line, eagerly anticipating the next game while secretly shooing it away; when nothing is on the line, it's merely sweetly bitter.

I'll miss the ritual of waking up forty-five minutes before the alarm, sauntering to the kitchen, making some Sunday mornin' espresso and plopping into the corner of the SS Sectional, frantically trying to unearth myself from the avalanche of pillows before kickoff. Sometimes I don't make it. I'll miss the godawful trap games away to Siena and Cagliari and Livorno under a dreary fall's rain, cursing the deplorable state of the pitch and wondering if God cares about my quality of stream that day. Usually he doesn't. I'll miss getting the chance to talk like Andy Rooney in front of thousands of people who don't really know who I am, and I don't know them. That doesn't really make sense, because clearly I still will.

Huh, I guess I am Andy Rooney.

I will miss the ritual, and I suspect others will too. We each have our own which makes our Roma unique. I'm extraordinarily superstitious about not being superstitious, but I can say certain brands of coffee bean are no longer allowed on gameday and there are certain shirts which can no longer be worn and the socks can't be Puma and the laptop here and the blanket gray and the amount of sips it takes to finish the beverage must be a prime number. That's all. But I win games for Roma, yessiree. That coffee? That shirt thrust back onto the hanger? Those socks? Well where do you think Mirko Vucinic gets his goals?

The spring sun and short-sleeve warmth is always a disheartening sign: they're the fall leaves of the football season. It means the good times are coming to an end, summer will soon be here and we'll have to fill our gaps with wondering who's going where, what superfluous bit Inter will buy next and such cumbersome nonsense as the World Cup. And quite frankly, I don't have the time to have two hours of extra time per weekend.

The dwindle has arrived and soon it will be gone, replaced by reflection and anticipation, for some in equal parts. There will be plenty to discuss, distract and dismiss, but it's not the same. Nothing can match the ceremony of the simple Roma game, the ninety minutes of red and yellow, yellow and red. Monday morning I will be crushed bittersweet no matter the outcome - I want them to win the title, I so desperately do and I shall celebrate, oh, I shall celebrate, if it happens - but for ninety minutes on Sunday only one personality will be placed upon that pedestal: AS Roma will be The Love, for one last time.