The 38th Game: The End Of The Beginning.

Share All sharing options for: The 38th Game: The End Of The Beginning. 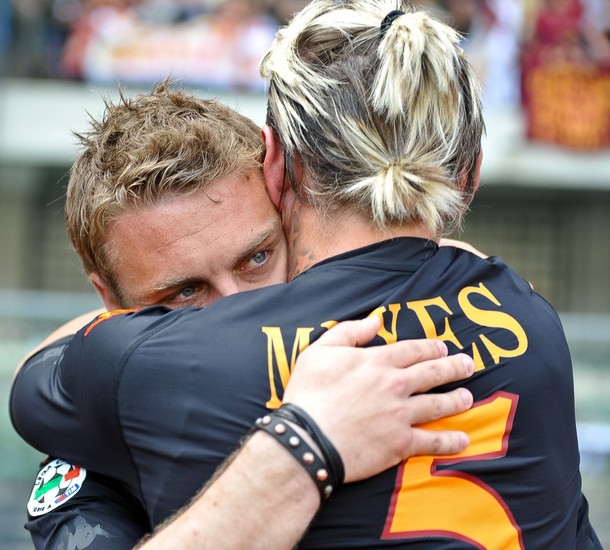 For some, football is a sport; for others, it is a fairy tale; for Roma, it is real.

At halftime on Sunday I sat calmly, as commanded by Spalletti, and absorbed. The "other game" hadn't been turned on once, nor had I sneakily glimpsed at the scores; but I suppose there is no respite for ignorance here, and I knew. I also knew Roma weren't going to win the title; I've known since they wiped the floor with Inter.

Roma is pain, it is anguish, and it is real. It is not for the weak of heart. It is the tearful goodbye when forced to sell off a Roman son to pay the rent. It is sitting stunned in last place as the once savior hands in his resignation. It is hitting rock-bottom at home to the worst team in the league...again. And it is watching a team mount the most unlikely, heroic of comebacks, finally becoming the best team in the land, only to come one step short.

Life is not a fable, a fairy tale. To win the scudetto in a year so surreal would've gone against everything we know Roma to be.

I've watched Serie A for too many years to naively believe it holds even a drop of sanctimonious water or can claim to something which may resemble the good and just; I do not believe in fate, the "meant to be" or the divine in calcio. The gods only awake when Livorno enters the frame, spew their poisonous thunder of vengeance before settling silently into slumber. The rest is a smattering of politics, money and more money. I've had, lost, and tried to regain my faith in football, but I've never had faith in calcio - not recently, anyway.

And so there were were no stories to be written, fairy tales to be penned - not for Roma. And that's okay by me.

There will be more on the season, plenty on the season, but I don't ever want to let this final, 38th game get lost in the grand scope of AS Roma. It was, for the second straight week, the perfect storm for Roma to return to its old ways. The perfect chance to capitulate, to mentally stumble, to collapse at the final hurdle, to let the doubters creep from the shadows.

They didn't. Once again.

This isn't about a coaching change or a slight personnel change or anything tangible; this was the end product of a philosophic overhaul, a mental fortification. This was necessary, not just mathematically, for a chance at a chance, but for the long-term future. It was necessary via the manner in which it came: Daniele De Rossi emphatically burying the game moments before the halftime whistle. The strike the star, but the timing within the circumstances of such precision perfection it must've been scripted; the man the superstar who's struggled through much of the year, being that decisive piece when his team needed him most. The goal, the game, the clean sheet - a step, a positive step. It wasn't just another game, the other game waiting for the scraps - it was one of thirty-eight.

This season has not followed the calendar year, and it will continue to defy the sport's monthly parameters. We said September was ritiro, October the August friendlies and November the true beginning of this new era, the Ranieri era, and it remains as such. Not an end to the season, but the end of a beginning - an affirmation, even. An affirmation with a glittering finale, yes, but also a continued focus and eye to the challenge ahead.

Mr. Ranieri has built something awfully special in Rome and it shall live on.

There was, however, a proper end. I can't remember in recent years having such a hard time watching a sport as I did when Max Tonetto came on. Genuinely, the heart wanted to watch but the eyes wouldn't; Roma in their best black, it was a mourning. Partly for Max, even largely for Max, but also in respect to what he represents: the Spalletti era. Most have transitioned, but Max fit the scheme; he was the perfect piece to the perfect puzzle. He was a Spalletti fullback: moving, running, overlapping and crossing. His style is Spalletti's style and vice-versa; his play was marvelous, and it helped make Spalletti marvelous.

Watching Max move, run and pass with a little less vigor was akin to watching four years of Luciano Spalletti given one last farewell run. They will be inextricably linked in Roman minds, as they deserve to be, and remained so on Sunday, one from Verona, another from Russia, walking off into the sun as one, leaving us brokenhearted and smiling through tears of the bittersweet as we look to the future with hopeful hearts.