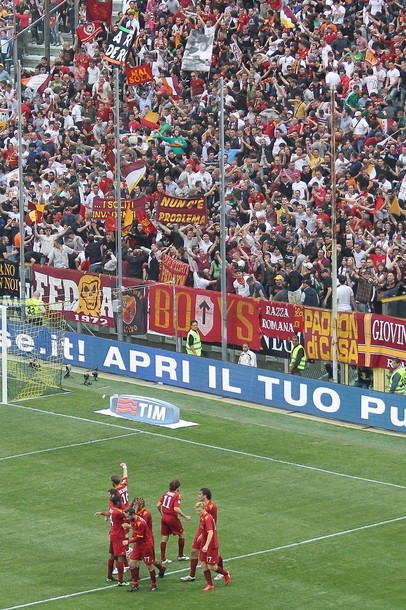 We all saw it. It was there, right before our very eyes. The standings don't matter in situations like this. The teams at hand don't really matter. Whether they would've won or not isn't really at question. It's a question of integrity, of the sport, of manhood - and they dogged it. Did they throw it? I don't know - Muslera didn't, that's for sure. But they dogged it. Plain and simple. It was right there.

I expected it of the fans. I have no respect for the fans, never had respect for the fans - they brew a culture which deserves none. (And really, can we get some better banners than 'Oh Nooo'? What is this, a Tina Fey movie? Heighten your standards.) But I did have respect for the players. I won't lie or pretend as though I didn't - the term professional isn't highlighted often enough in casual speak when referring to professional athletes. It doesn't mean I like them after they leave Lazio, not bolting that shithole immediately leaves a mighty big stain on the ol' rep, nor do I want the good ones at Roma to rub it in their faces, but I can appreciate they do a job which they are, to some degree, skilled enough to do. And despite that turd for a shirt they wear, I truly believe most of them are no different than any other professional athlete: don't really care too much about the team while the paycheck is so big. What do most of them care about the Roma - Lazio derby growing up in Serbia or Switzerland or Sardinia? They don't. That same fan culture does nurture something of a decline of person - see former diehard Romanista Radu, Stefan - but largely, if Roma had bought them they'd be legends instead of the scum of the earth. I can call that spade. (Though do note this is only for the few players on that squad who aren't shit footballers.) Cashin' checks, most of 'em.

Benoit Assou-Ekotto had perhaps the best interview of recent football memory this weekend, even if much of it mirrored an Adebayor interview a year back: "If I play football with my friends back in France, I can love football. But if I come to England, where I knew nobody and I didn't speak English … why did I come here? For a job."

They didn't even do that. Didn't do their job, didn't earn their check, didn't respect the game. Didn't do much of anything, really.

The fans we knew. The players, we didn't. Montali nailed it on the head from the go, "I never thought my eyes would witness anything like what I saw tonight.” Nor did I. But unlike Montali, I don't think they failed calcio, or the sport in general. No, they failed something far worse - they failed as men.

No anger, no venom, no cookie cutter derby hate - just pity. It's come to that.

Anyway, back to the good stuff.

I think in the insanity of the weekend I forgot 91 minutes of a 90 minute game, if such a thing is possible. I remember Totti being slick and doing slick things with his slickness. I also remember Barca-esque possession numbers for the first half, but my memory tells me it was Parma, and that can't be right. I remember John Arne Riise being stretched on that left side like it was the Spanish inquisition. That sounds right. I remember Marco Cassetti being cracked open like a can of tuna within the first five minutes, which is why he was put in the doghouse for the rest of the half. See: Riise, John Arne.

Other things I remember:

A good win. A good game from Ranieri, particularly to get Philippe some game time before Wednesday. A good three points. Good all around, you might say - just what the doctor ordered.

And finally, Daniele De Rossi's beard is evolving into the bastard love child of Socrates and Zach Galifianakis. 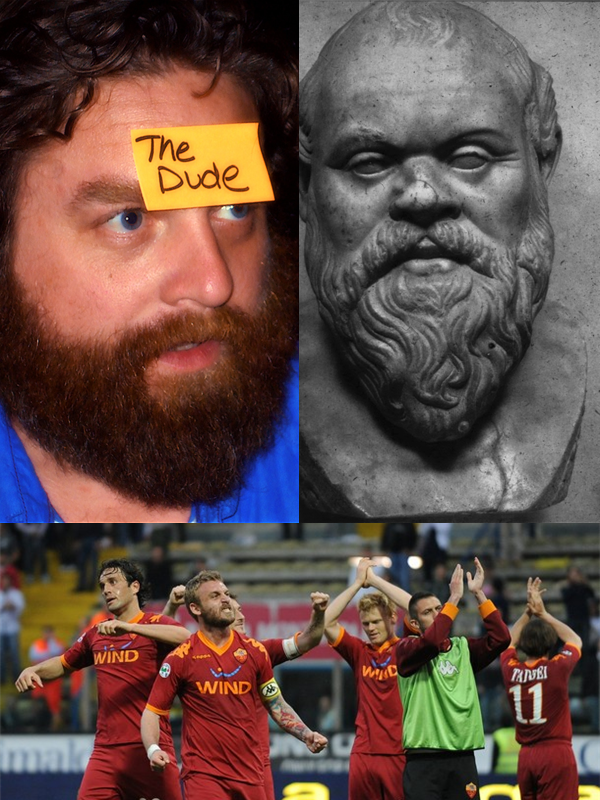