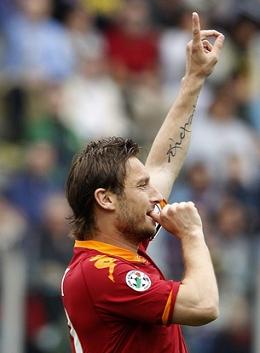 The game looks to be over. And it is.

Inter with plenty of legs, Roma's paced, however, has deanded since the hour mark. +3.

There should be plenty of extra time here, but it'll be awfully tough to break through all of the shirts.

87' Easily 2+ minutes wasted. Milito flopping all over the place.

No final ball through the mush and Taddei fouls halfway into the Roman end as T.Motta is busy doing T.Motta things. Inter wasting hours here.

84' Nothing coming from the left right now....Mirko free kick again. Balotelli pull back.

83' Mirko has his shot and it goes wide. Balotelli flopping all over the place.

82' Juan takes out the ball, Eto'o and the linesman all in one. The man's just that good.

Menez tripped in the box. No call. Obviously.

79' Corner....poor set pieces today, really. Inter going down at the earliest possibility. They've been wasting time since late first half.

76' Riise goes high. He hasn't forced a save on a free kick in I can't remember how long.

Mirko free kick from 20-25. The stadium seems somewhat quiet, but it could just be the feed.

74' Lovely little dummy to Totti but the man who would normally be making the run, Perrotta, is the one who was passing him the ball. Doesn't work so well.

73' Mirko now disappearing into offside. A spark of some sort is needed here. A goal the obvious and preferred kind.

Menez hasn't yet gotten into the game...on cue, brilliant run by Menez for a corner.

68' Eto'o v Riise not exactly Ranieri's preference. Though it's fine when he's shooting over the bar from 25.

66' Motta being given plenty of space on that right, of course, with Balotelli on, and the central midfield of Taddei, DDR and Perrotta...and a world class tackle by Juan as Eto'o roasts Riise. A phenomenal tackle, in fact.

It's certainly a risk, an early risk. And it's opening pockets.

63' Luca off, Menez on. And that's it for the subs. Mirko....Taddei...almost an own goal. A lovely move immediately.

Milito fouled Totti and Totti goes right back after him when it wasn't called. That should be a yellow, and it is. Deservedly so.

Jeremy getting ready to come in? Looks like the pinny is off.

61' Motta certainly can attack, but Balotelli is tucking in behind on occasion. It's a risk to be sure.

58' A brilliant pass by Daniele decoyed as a shot, but either just a hair off or Luca didn;'t see it coming.

Roma goal, offside. A wonderfully worked movement with the rush of Motta to Totti to Luca, who was off.

JSB save on the counter. I do loathe Roman set pieces sometimes.

And Chivu still won't strap up his fucking helmet.

53' The net was entirely open, Cesar helpless and Roma ready to celebrate. That one will not sit well.

My dear. Oh my. Juan misses the sitter on the rebound. Heads it over the bar. Catastrophe.

Shape-wise it seems something closer to a 4-3-1-2, but this one is such a muddled mess it's incredible.

49' The game is awfully slow, but it's no less chippy. Fouls here, there and everywhere thus far.

48' Riise gives Maicon a shove. There won't be many genuine handshakes after this one.

46' Materazzi gets his first exaggerated injury out of the way.

The Motta sub would seem to be because Burdisso was ever so close to red.

Totti for Pizarro, who was suffering. And Motta for...Burdisso I think.

Totti coming on. Motta too. Whoa. When was the last time M.Motta made a cameo? Coppa against Catania? Udinese? Livorno. March 14th.

Finding the words difficult to sum up this game. Inter+1 is one. Or two. Or whatever. In the words of Didier Drogba, it's a fucking disgrace. Materazzi should be off but perhaps best of all, Luca Toni's shirt was doubled in size inside the box and Luca was then called for a foul. Somehow.

How do they get away with this stuff? And how on earth does Roma have three red cards while Inter has one?

Luca Toni foul in the box. That's insane! Samuel had Luca's shirt off his damn back! And the foul is against Luca? Come on.

Samuel pulls Budrisso down in the box and then knees him into the ribs for good measures. Real finesse game, this.

5' added. This game is in shambles. Roma corner.

Chivu yellow for words. Horrible, horrible dive from Materazzi. There's really no defending him, is there?

There was a yellow - it's either a red for Materazzi or a penalty.

44' Balotelli has gone to ground again. Anytime Burdisso goes even near him, it's to the ground.

Now a Roman free kick. I can't imagine they're too pleased - though they were napping. Another Inter injury. Materazzi, so it's a dive of sorts.

Perrotta yellow for timing his tackle with a broken Casio.

37' Watching the replay, that's scandalous. Tripped by the last man. We could say no attempt to play the ball, but it is Materazzi....

Mirko taken down by the last man - yellow for Materazzi. Plenty of refs would've sent him off....denied a clear 1v1.

Chemistry born from years of playing on the same side - another brilliant cross - one which could break bricks - from Rodrigo and a snapping header.

33' So nearly some tremendous control by Mirko to Luca, but alas, just a bit off and it's a throw. Perrotta run......Taddei.....Perrotta header wide! Dear lord that was close.

32' Luca offside by his longest hair.

31' There is pinpoint accuracy, but Riise is getting some tough bounces over on that left side.

30' Balotelli tumbles. Freekick. I believe they have the design to get Burdisso sent off.

Unlucky bounce and Zanetti tries to center a ball but hits it to Totti knows who.

Balotelli takes out 3 yards out of bounds, still runs with the ball as if nothing happens.

27' Sidebar at the Olimpico. Rizzoli telling DDR & Zanetti, "calm your men down or this will be five-a-side by the half".

26' Thiago Motta with antics befitting of his dirty, cheatin' self.

Mirko run....Taddei cross fingertip deflection. Oh dear. They finally had numbers and Luca was inches from 1-0. Inches, I say. Inches.

24' The forward line - or forwards - are dropping too far back and Inter have far too many numbers behind for Roma to mount any sort of advatnage with numbers.

23' DDR misreads a pass and Inter get possession, which forces Burdisso to save the day after Balotelli breaks the line.

20' A little opportunity for a break, but I can tell you one thing: Luca Toni is not going to dribble 60m through three shirts.

19' Julio Cesar has to run 35yards out of net to tell Chivu what to do. Is anybody really unhappy Roma sold him?

Riise off the wall, Mirko second goes way high. And Eto'o is now pissed. Presumably he isn't being paid enough.

17' Mirko free kick 22y from net back down the other way as Matric kicks him late, then has words for accepting a late kick.

Milito offside goal. AND IT"S CALLED. Virginia, there is a Santa Claus!

16' This isn't the prettiest side up top with Perrotta and Taddei against numbers, but it's been an ugly game thus far in general.

14' Luca twirling in the box. Luca v Matrix isn't even a contest right now. It's like rugby - these teams aren't big fans of one another, are they, as Taddei wins a foul.

Burdisso yellow after Nicolas ran up Balotelli's backside but got ball. Red cards will come today.

12' Maicon beating out David in a feet race. No prizes for predicting that one correctly.

Inter cross headed over the bar as there's a Braziliantastrophe on the field: both Motta and JSB holding their backs. Julio's under no contact. Worrisome. Both, however, are up and at it.

11' A Taddei cross gobbled up. The ball moving forward is being controlled by Roma easily as numbers begin breaking until apoor Pizarro passes gifts back possession. Little bit of back and forth right now....Maicon saved by JSB.

Burdisso sends in a wonderful ball to the box...wait, did I just say that?

7' Pizarro fouled; no call. Juan, meanwhile, it kung fu kickin' balls out of the air.

Free kick headed out. Materazzi and Balotelli have the same haircut. How very fitting.

6' Apropos of nothing, Burdisso's a stud.

In other news, Materazzi trips Toni up and has a few words for Rizzoli - free kick down the Inter end.

4' Sneijder simpy can't run. He's gonna have to come off. And here comes Balotelli, who is a turd. (RACISM ALERT.)

3' For those not in the know, Mourinho said "Sneijder wouldn't play", then put him in the XI, which hasn't gone down well in the press, because he was fooling no one. And Wesley is still down on the sideline and you have to think he may not last very long as he's now limping back on.

1' Heading to the Sud in the first half - prefer it the other way around. Sneijder hurt already - lil' boot from Burdisso.

They're on the pitch and getting ready to kickoff.

t-2. There are a variety of streams which may or may not be true live. Might take me a minute to get them all sorted out.

t-5. I believe Lippi's in the house. This means you should expect him in the Curva Sud in the second half.

If you don't know by now, you'll never know.