Share All sharing options for: The More Things Change 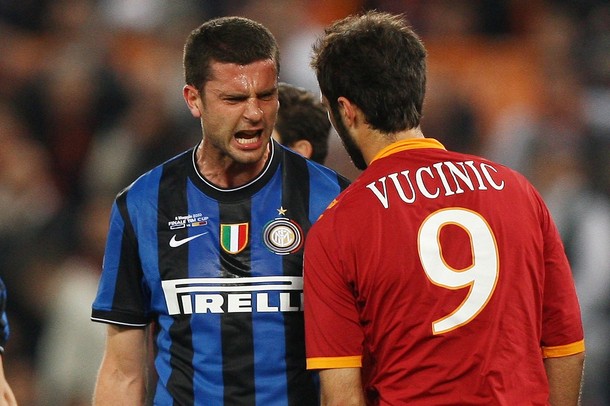 Contrary to most, I don't mind a little rough and tumble physicality with my football. More specifically, I like a melange - throw me a few curves every now and again. But I can't say I like dirty football. And I don't like it when one team descends to the level of the other, which is what happened. I particularly don't like it when that team is technically superior and should've played as such, as Gian Paolo Montali said after the game.

* - And as an aside, I'm planning a loving homage to Montali, but I really have no idea what the hell he actually does outside of the generalities. I'm sure I could find out with very little research, but research...who needs it. (Oh.) So for now, we'll call him The Fixer and be done with it.

It was a mistake in philosophy, and when you play a physical game, the "line" - that line they're always banging about - keeps getting pushed further and further and eventually, it's going to be crossed. Inter crossed it about four years back and has been mocking the league with it; Roma joined them on the other side Wednesday. It's not good and I suspect it'll change - that's not Claudio's way.

However, much like they need to change their philosophy, maybe we do too. Watching that game, can we draw anything but that these two teams, personnel as constituted, are now in the midst of a derby spell, if acute? If that was Lazio, it would've been "just a derby".

It looked like a derby to me; it may have been a derby to the players. I suspect the next game won't involve unicorns and Care Bears and lollipops either. They don't like each other, plain and simple.

The other parts...it's pretty frustrating to watch, really. Inter has enough money, they don't need the help. I don't think Damato was 'influenced' in Samp, I just think he's either a) an idiot, or b) didn't see, maybe both. So we can say against Sampdoria they missed their chances. We can say against Inter they weren't allowed their chances. Vucinic was off, therefore Materazzi was off and Samuel had Luca's shirt twice its size in the box, all within the first 45. It's basic, textbook stuff. How you don't see Luca Toni's shirt go from XXL to XXXXL...well I just don't know. Roma could've been better than 'that', should've been better than 'that', but Inter weren't better.

Daniele said morale is high, and it should be, but if you were in their position, working hard day after day, year after year, to see the same calls go against you each and every time against the same team, can you understand why they might boil over? They're human. Those who aren't saints would too. It's frustrating when nothing ever changes.

Well, they did call a Diego Milito goal offside. Finally.

Should he have done it? Nope. Had we forgotten Totti's mean streak? Nope. Does it change anything? Nope. He's still Totti, has more than enough in the bank to wash it away and someday, he might do it again. What makes some great is also what makes them vulnerable.

But let's also call a spade a spade: he just did what every one in Italy has wanted to do for two years, including Balotelli's own teammates. Actually, I think Milito wanted to murder him, which is a slight bit more. My guess is his own mother would abort him if she had a second go around too. It wasn't smart, Francesco shouldn't have done it and deserves whatever hefty suspension he gets, but nine-tenths of those condemning him silently wish they could do the same. And that's what makes him Totti.

* - There's a major spam issue, I know. A new commenting system is in the works, so apologies until then...but in general, don't repeat comments. Eight hundred times.