Share All sharing options for: Goodbye, Hello & Go Away. 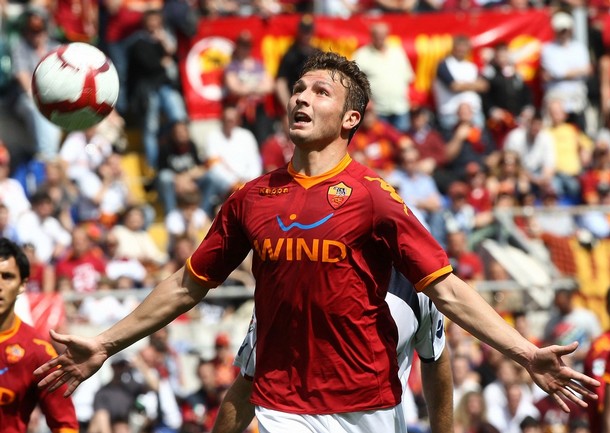 I suppose with The Unthinkable now past, it's only right to get down to work with...

Losing Marco Motta. Which is very much The Thinkable, The Likely, and The Damn Near Sure Thing after watching him completely drift from contention under Claudio. He was a Spalletti buy, a Spalletti player in the Spalletti system, but those days are long gone. Ranieri would probably rather a cast stature of Burdisso at rightback under most circumstances than Motta. To call his defending subpar this year would be an offense to mediocrity and good taste. Somehow, he regressed - and right from the start. He was being scorched in Kosice like Slovakia was the surface of the sun, and he didn't have too many extended runs from there. Hell, he shipped two goals to Livorno on his own - last place Livorno.

That said, I'm a huge Motta fan. I like his game when he defends, I like his personality and I like his professionalism. He's a star on another team. It's just unfortunate that team isn't Roma - nice puzzle piece, wrong puzzle. 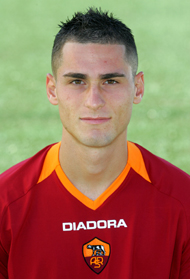 The suspicion - and this was the suspicion by about March - is that rightback would involve, in some way, Aleandro Rosi this year. Good year at Siena, good talent, and good hometown - he's all Roman.

Priorities? I think so. Your once and again rightback: he's Roman and he can defend.

I have this thing about transfer rumors....I don't believe 'em. Most of the time I force myself to see the slightest bit of logic, but in the back of my mind I assume the journos in question have their big pants aflame. This goes triple during tournaments, and ten fold during major tournaments, like the World Cup.

You'll notice the day after Alexis Sanchez had Honduras for brunch his face was plastered all over news sites, as though club directors - Roma or otherwise - don't know he's the business already.

And then hours after Sotiris Ninis had made a sub appearance, suddenly he was thisclose to Roman property as well. Obviously - playing in a major tournament must mean Roma's going to run out and snap him up based on a garbage time cameo.

Both have been linked before, which is part of the issue - they're just rehashing old rumors based on new play. I don't doubt the club is keeping track of both, and damn well they should, particularly Ninis (Sanchez, I fear, is far too much scrilla), but it doesn't mean because they walk out onto a WC pitch Prade has suddenly remembered who they are and phoned up Panathinaikos or Udinese to put in a bid. That's just nonsense.

I buy a small portion of transfer rumors under normal circumstances. I buy nothing during a World Cup year, except the occasional grocery.

Which means the real - and unreal - rumors will commence a couple weeks after the tournament. Until then, I have a headache.

It's a major issue, I know. What I don't know is any quick fix and I've been a bit busy. Apologies for the delay, but you've probably got better places to be anyway - like up in the Trigoria trees with RomaNews' stalkerazzi waiting for ritiro to commence.

Oh, and if you're going to email about spam, don't throw 'Spam' into the subject line - I'll give you one guess as to where it's landing. And it's not the inbox.