The Future, Thy Name Is Greco.

Share All sharing options for: The Future, Thy Name Is Greco. 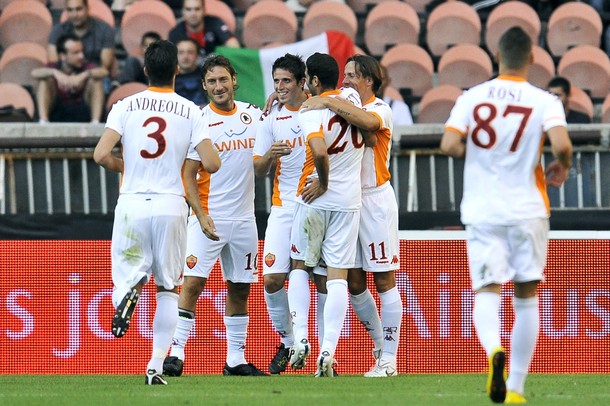 For those who didn't watch, here's the fat skinny:

Roma played much better than anticipated with a few hiccups in the back but Julio Sergio looking to have bartered his soul for another year. The anticipated: Totti put on a show, Mirko put on a strop and Menez put on his shirt for about twelve minutes before putting the fandom into collective gasp, coming off injured (he's fine). The unanticipated: Leandro Greco was a legend and scored the lone Roman goal off a move that stands tall amongst the most refined of footballing symphonies during the Spalletti days......and it included Adrian Pit.

PSG were thuggish, unfriendly as both friendly participants and hosts, Totti had a peno called back - Taddei was called for entering the area when there were actually French shirts ahead of him - missing the retake, and PSG were ultimately, ahem, rewarded with the trophy via equalizing goal at 95:55 of 3' added time. Something like professional wrestling without trying to hide it.

In other words: they'll be playing Inter twice this August. Only this time we can laugh about it and move on.

For what is a club still one month from competitive football (conversely, PSG play next weekend) and missing a large number of key players, this was a very promising showing and Claudio sounds good and pleased. Cupcakes and unicorns all around.