Share All sharing options for: Here Comes The Roma 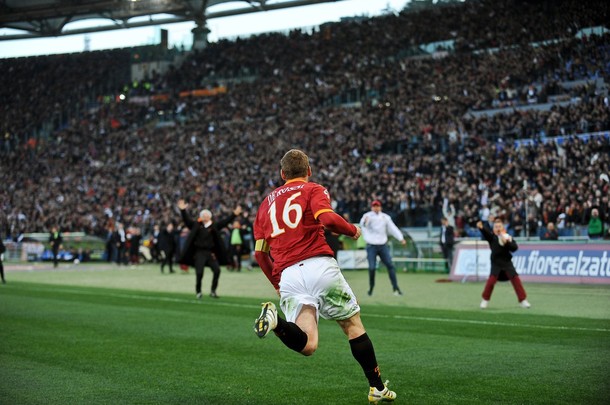 It's a misleading name, the Supercoppa. It is not, in fact, super, though the mere presence of AS Roma does certainly help. It's something of a cup, sure, but trophies handed out while the summer window is still open have a vague feeling of the Parisian Tournament about it - what a lovely preparation for Inter that was. The game itself doesn't hold a tremendous amount of value for most, nor does it merit consideration when forecasting the season - last year's winner speaks volumes in that respect. It's something a little bit beyond the regular weekend, but not quite a Big One.

What it does offer is 90 minutes of AS Roma, and that is simply glorious any way you shake it.

The problem is, of course, we're subjected to 90 minutes of Inter's interpretations of football, which isn't quite as good - one might even say it's the polar opposite. And even though some of their most detestable figures are gone, nothing's changed. At least not for the better. There's even every chance things might've changed for the worse; a change which may be paired with a matching scar on the other side of Chivu's head from DDR's boot for politely asking the fans to suck it at the Olimpico in May. We still have our absolutes - Marco Materazzi will have me thinking the fourth star should be scratched off, for example, and I'm joking far, far less than I should be, which is quite sad - and we still have the potential for fireworks the moment they step on the pitch.

A derby in miniature, a nice immersion into fire to prime us for a year of Italian shenanigans, but it's better described as Roma. Simply Roma.

It's been far too long.

Liveblog up well in advance.