The Cream Rises To The Top

Share All sharing options for: The Cream Rises To The Top 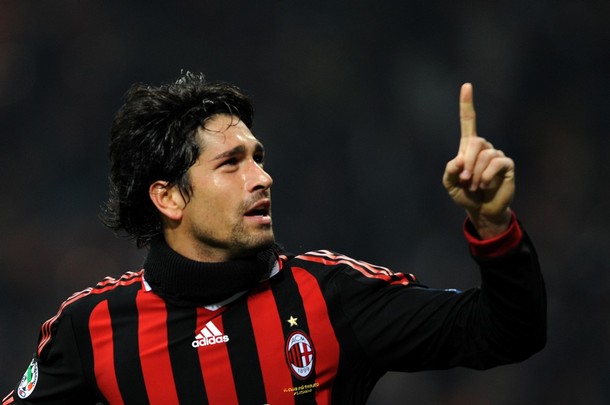 I'd like to begin by saying Milan have done some really nice deals for relatively short money this window.

And I'd like to thank them for extending that favor for Roma.

Now all that's left is to huddle into groups and mutter to each other in disbelief. The club has no money and the financially future can be aptly described as TBD, which is not something Borriello once contracted from Belen. At least these truths are what had been told to us by conventional wisdom and the front page of RomaNews over the last two years.

Going into the Great Calcio Swap Meet 2010, the optimal return was walking back home toting an internal crisis over the big name addition, Valon Behrami. Anything else, like a loan for Mauro Esposito Redux, would be a bonus.

This isn't a bonus - it's a gamechanger. It's the one glaring hole on the team, one which was being plugged with Jenny Craig pamphlets and prayers, not simply filled, but bustling over. The shift of power hasn't quite changed, but the balance of faith most certainly has. A shot in the arm to both the team and the fans in one fell swoop.

What's special about this move isn't the name on the back of the shirt or Marco Borriello himself, who's good but not great; it's special for reasons every good team should aspire to us as a foundation building mechanism: his skill sets complement and complete the team. Aerial ability? Check. Finishing? Check. Moves in the general direction of the goal with purpose? Check. Not fat? Check. They need a striker, a proper prima punta, in the box, to lead the line and who can hold the ball up from somewhere which isn't twelve yards behind David Pizarro. Check, check, check.

In a few words: everything which was so glaringly necessary before, during and after they took the pitch with Cesena.

But it means so much more. Mirko thrived once Luca arrived in Rome and was drawing defenders, and he may very well do the same with Borriello in the XI, drawing defenders, making runs which disrupt defensive structure and winning balls in the air outside the box - what a novel concept. The same could happen for Menez, now likely relegated to the bench and fighting for his place, or Adriano, whose illustrious Serie A return will now mean an uphill free climb - no oxygen tanks - to find some semblance of his former self or else earn a spot with Julio Baptista in the stands. Competition is good. There is now proper depth in the attack, and Adriano can resume the far more palatable position of "roll of the dice" than his previously frightening role of Plan B (I imagine he'd make a mighty fine contraceptive as well). This is a necessity which has spawned a luxury.

And yeah, if we're going to run out the fan's favorite pastime of listing names on a team sheet, I'll go to battle with Totti, Vucinic, Borriello, Menez, Adriano, Okaka and Baptista any day. Those are mighty fine odds, my friends.

Sometimes football can seem all too simple: they had needs from a footballing and tactical perspective and they filled those needs with a very good footballer who's entering his prime. And all for €10m.

A resounding success from any angle.

Most know Borriello well enough, but his year at Genoa in highlight reel form is on the list of Best YouTubers In The History Of Ever, along with Lorik Cana's Marseille compilation, Caressa in Dortmund and anything Francesco's ever been in. The man has something of a flair for the mind-numbingly spectacular.

That's how I'm seeing this right now and will continue to see it until January. If Marchetti wasn't coming as the backup, Doni's the preferred. Always helps to remember not long ago he was quite good.

Behrami: I'm not typically a fan of just tossing people around a football pitch willy nilly, but Rosi can easily play midfield - most here already know this - and Cicinho is not a terrible rightback, nor is he completely incapable of playing the wing should emergency arise. There are certainly options in Rome; options which should be able to get the job done against most sides in the league.

And Behrami was always the "luxury", if you want to call it that, in my eyes - striker was the far more pressing issue.

We'll revisit the issue of having a piece of shit like Behrami on the team sheet in late December.

Julio Baptista, Cicinho: For a club which has spent the last few years absorbing a hailstorm of criticism over its lack of depth, they could be doing a great deal worse - genuinely. Should the 08-09 crisis arise, I'll gladly take these two over Souleywhatshisnuts Diamoutene and Filipe "I can't get a game at relegated Siena" Felipe in a heartbeat.

(My hopes for a JB renaissance have softened considering he'll be lucky to get half the minutes of Paolo Castellini by January.)

Simone Loria: Take everything said above and apply the complete opposite to Loria.

I have pangs of sympathy for Simone, I genuinely do, because he seemingly can't help himself. I half expect him to break Borriello's ribs in training by week 3.

Again, he's a body who looked varying degrees of excellent in the friendlies.

Depth is nowhere near a bad thing.