Go Sit In The Corner

Share All sharing options for: Go Sit In The Corner 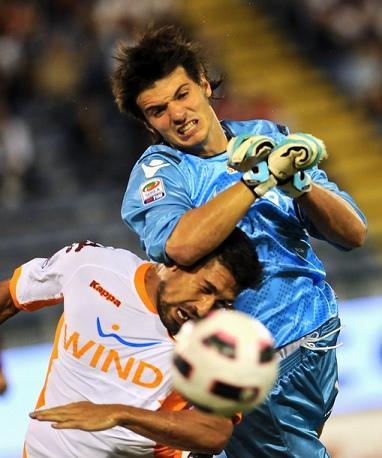 I still like Nicolas Burdisso the footballer quite a bit, which is obviously the news of supreme importance you've been waiting for, and will be happy to see him take the pitch in 5 games or so. Also, I most surely will not toss the loss entirely on him, even though he may. But...

That's the Nicolas Burdisso we all know. Very good defender with a penchant for making horrifically inexcusable mistakes which put his team at a severe disadvantage. Most, if not all, gratefully conceded Roma had dodged the Burdisso bullet last year. The gods apparently felt the law of percentages needed to be respected.

And this, ladies and gents, is what happens when the gods even things out.

The rest of it was something of a perfect storm of circumstances:

Losing a sub, a defensive sub, to injury within the first 15 minutes; being forced down to a second Burdisso who is, by all accounts, still waiting to approach Loria levels of quality; having Totti come off due to illness and general cross country reasons, therefore Borriello, said not to have 90mins in his legs before the game, had to play 90mins; and a back line which looked like something formerly lunch. Oh, and they played like shit otherwise. But if they'd played like shit otherwise - with 11, without an hour plus at 10 or That Other Guy Who Looks Vaguely Like Someone Else On The Team on the pitch - I'm fairly convinced they would've walked away with at least a point. That's not to slight Cagliari in any way, a team I like quite a bit, but more a result of us having plenty of evidence from Ranieri's Roma 09-10.

But maybe most importantly: going down to ten men for over an hour in the second week of the season, particularly after a break (more international absurdity), isn't quite the same as going down to ten men in November. 'Midseason form and fitness' isn't just a cliche - it's a real, highly impacting thing, like 5-1 losses to Cagliari and leprechauns.

The game itself isn't so much of a lingering problem as the fact that this is the second week in a row I've been forced to say those words. Mistakes will happen and are fully acceptable in this, the human realm, but the worry is the pattern. They still have more than enough in the bank from last year to believe this is but a blip or a slow start (which, given the circumstances, would seem to be true) but blips are, by definition, short, staccato, and over when they're over.

Three points against Bologna, or else.

Now: 36h to the Allianz. Get right back on that horse.